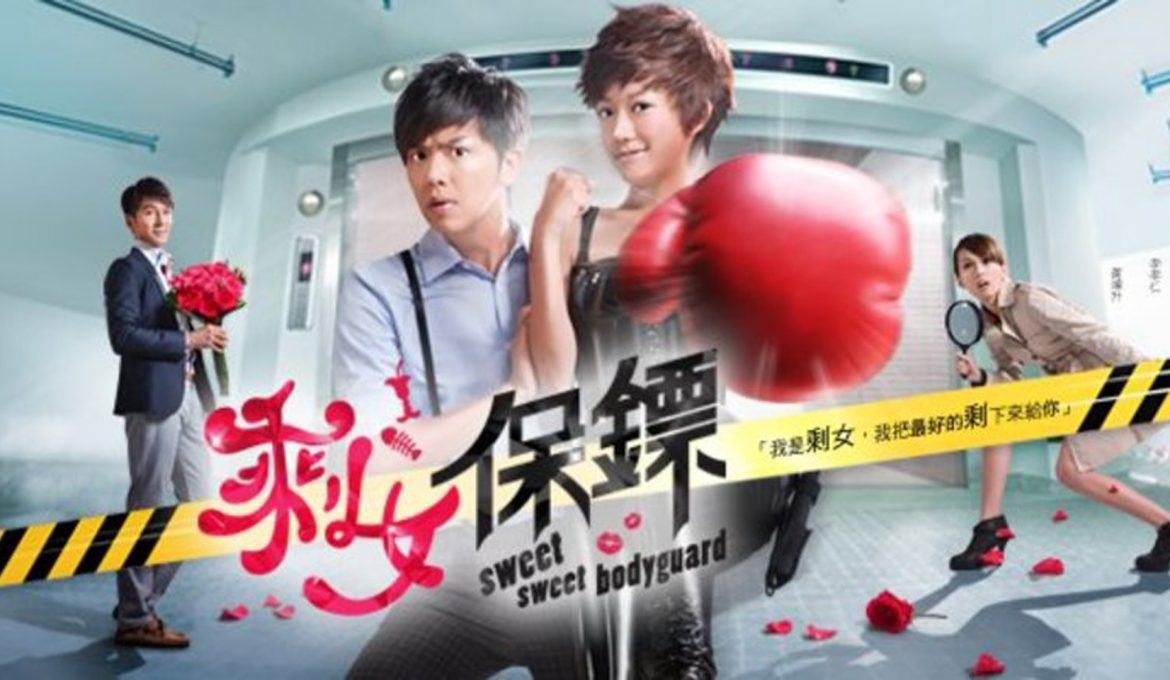 Sweet Sweet Bodyguard is a three-year-old Taiwanese series which we only had the opportunity to watch this year because, up till the last year or so, it wasn’t available to us. It’s a lengthy 82-episode series featuring a romance plot between a female bodyguard, Zhen Ai Jia (Summer Meng) and her client, General Manager He Zhong Qi (Alien Huang) of an automotive company. Following some incidences where He Zhong Qi‘s safety is threatened, Zhen Ai Jia is assigned to him against his wishes by his family.

It’s got a lot of episodes for an Asian drama (that is, compared to dramas typically available on online streaming sites). We’ve been watching series that are between 13 episodes and 20 episodes. Sweet Sweet Bodyguard was four to five times longer than what we were used to. Still, this series came as a recommendation despite its length; so, we figured it had to be good. What’s more, we did like the sound of the synopsis, so we gave the series a go.

At first, Sweet Sweet Bodyguard is quite slow moving. We found the secondary plot that focuses on the relationship between Du Cai Jie (Yuan Ai Fei) and Zheng Ya Lun (Li Li Ren) hard to get through, initially. This plot between Du Cai Jie and Zheng Ya Lun is that Du Cai Jie is hired by He Zhong Qi‘s father to find out some information on Zheng Ya Lun and to obtain samples to have a DNA test done to see if Zheng Ya Lun is his biological son. These scenes where Du Cai Jie snoops around for information on Zhen Ya Lun was tedious. Only when these two got together and became a part of the main story happening between the main characters of He Zhong Qi and Zhen Ai Jia, did the series start picking up for us and the 82 episodes didn’t feel too many anymore. It became a fantastic watch the whole way through after the first handful of episodes. We love it!

This is the first series we’ve watched featuring Alien Huang. He was great in it and we enjoyed his portrayal of his character a lot. And Summer Meng, we’ve seen her in 2014 Taiwanese idol series, You Light Up My Star alongside Joe Cheng. We’ll definitely be on the look out for both Alien Huang’s and Summer Meng’s dramas in the future.

There were so many scenes with Zhen Ai Jia (Summer Meng) and He Zhong Qi (Alien Huang) that were awww-worthy. Sweet Sweet Bodyguard was very generous with their kisses between their leads. They came in during playful moments, tense moments, after a kidnapping event, after their wedding—a lot! All of them were awww-worthy. The wedding scene (the screen capture of this post): we love the mise-en-scène. It looks very surreal-looking and dream-like! It was a particularly eye-catching scene that was sweet and also sad at the same time! The scenes following this to the end of the series were super sweet, though!

There’s also the younger brother-older brother relationship of He Zhong Qi and Zheng Ya Lun (Li Li Ren) that we liked in the series. While Zheng Ya Lun doesn’t want to have anything to do with his biological father (He Zhong Qi‘s father) and his family, he immediately takes a liking to He Zhong Qi and looks out for him like he’s his real younger brother. Every time these two are together the atmosphere is always very light, playful and fun.

The parts featuring the secondary couple, Zheng Ya Lun and Du Cai Jie (Yuan Ai Fei), we did have trouble getting through during the early episodes. We didn’t like Zheng Ya Lun initially because he did come across as rather sleazy when he’s often seen in nightclubs randomly picking up women like there’s no tomorrow. So, the parts where Du Cai Jie tries to seduce this rather aloof and sleazy guy, we were skipping them. When Zheng Ya Lun stops being quite the player and becomes the boyfriend of Du Cai Jie, it was all very good and had us watching and following their story—up until the last major obstacle when Du Cai Jie‘s father enters. We found us ourselves passing these scenes. It was just another problem (out of so many already) that Zheng Ya Lun and Du Cai Jie had to go through before their happily-ever-after.

This series was quite Zheng Ya Lun-centric. A lot of the problems that came about was because of this character. He had characters wanting to pursue him and make amends to him; he had those against him and wanted him to leave. He (and the son that he has) hugely affected the lives of a lot of the main and supporting characters in the series: Du Cai Jie, He Zhong Qi‘s father, mother and grandmother as well as his own. And he had characters being involved as the mediators, mainly Zhen Ai Jia and He Zhong Qi. Zheng Ya Lun was central to the story and was the driving force from Episode 1. The main story was Zheng Ya Lun (and Du Cai Jie since she’s the girlfriend) while the parts of the leads, Zhen Ai Jia and He Zhong Qi, were complimentary and served to provide lighter scenes against the slightly weightier but more significant scenes surrounding Zheng Ya Lun and Du Cai Jie. With the series having this theme of family, naturally Zheng Ya Lun and Du Cai Jie would be the focus—their problems were to do with family—while Zhen Ai Jia‘s problem of wanting to be a normal girl and He Zhong Qi needing to become less rigid and more accommodating didn’t cater to the theme. Still, we had hoped a lot more would occur around Zhen Ai Jia and He Zhong Qi. After all, they are the lead characters and the main couple of the series. Problems and events kept coming for Zheng Ya Lun and Du Cai Jie and those were central to the progression of the story of Sweet Sweet Bodyguard.

Zhen Ai Jia and He Zhong Qi still felt like lead characters, though. We were happy they were made the focus at the end episodes of the series. It was quite an unexpected problem that we just didn’t see making an entrance. We thought this final problem might bring in some very tense-filled scenes for the pair, but everything was still very sweet. It was awesome!

We did have this hope for a lot more action scenes than the few we saw in Sweet Sweet Bodyguard, though—with the series being about a ‘leftover’ girl becoming a bodyguard for a large corporation General Manager and all. There was only one at the end of the series that matched what we had hoped to see in the series.

There needs to be a sequel to Sweet Sweet Bodyguard to make up for the lack of these action scenes! With He Zhong Qi being in danger and Zhen Ai Jia always worrying about He Zhong Qi getting hurt in this series, there’s got to be an interesting story where the worry is the other way round!

82 episodes was not at all hard to get through after the initial slow start. Even with the story focusing on the side of Zheng Ya Lun and Du Cai Jie a lot and very little on Zhen Ai Jia and He Zhong Qi, it’s waiting for those Zhen Ai Jia and He Zhong Qi parts to come in between the many scenes focusing on the problem surrounding Zheng Ya Lun that made the series very addictive. We found ourselves constantly surprised at seeing yet another episode nearing its end and quickly moved onto the next episode to see what will happen next!

We’re glad we decided to watch Sweet Sweet Bodyguard. It has been a very enjoyable romance, comedy and family series. Definitely a recommended watch!