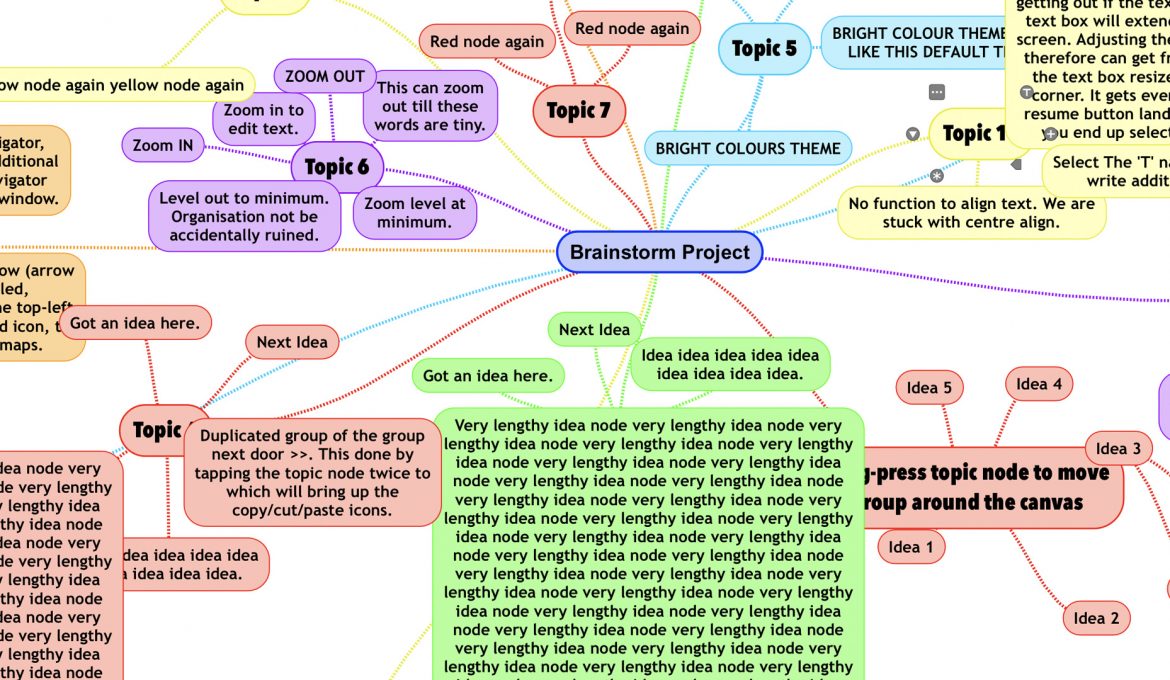 We’ve been looking for a simple app that allows us to brainstorm ideas and be able to see those ideas easily and navigate our ideas for writing projects. We came across SimpleMind+ for the iPad and found that the free version is very useful for brainstorming tasks.

The canvas area appears to be infinitely expandable, so the size of the brainstorm is limitless. Otherwise, we have found the canvas size to be more than enough for a huge brainstorming task.

The nodes is generous in space for writing. There doesn’t seem to be a character limit, allowing for writing even after 500 characters. That’s quite a lot of room for writing in one of these nodes! If keeping things neat and uncluttered is what you like, but you have the need for room to write in length somewhere that you can bring up whenever you want to look at the idea in detail then there is the handy text window that pops up after clicking a navigator icon on every node. This feature therefore also helps give more room for brainstorming with additional details for an idea being able to be kept hidden under the corresponding idea node.

Functions to organise and lay out nodes and groups of nodes are limited: you can either move each node around individually simply by holding down onto the node and moving it around wherever you want to position it; or, you can move an entire group by long-pressing a topic node until a thin border becomes double its thickness and then dragging the entire group elsewhere on the canvas. There is no function that allows for distribution or alignment between nodes; organising nodes neatly within a group can only be done manually.

Relocating a node to another topic is quite easily done by tapping the connector line and dragging it to another topic node. Deleting one of these connector lines belonging to a topic node enables you to make it a parent node. In other words, you can have many individual header subject nodes with topic and idea nodes under it as opposed to having only one main subject node where everything branches out from.

There is no choice for the alignment of text (only allows centre-align), font, font styling or paragraphing in the free version.

To help have a better view of the project, you are able to zoom in and out to see the entire project or just a part of it.

Another useful feature is the apps copy function: copying an individual node, a group or an entire brainstorm to a new project can be done through activating/selecting a node/topic node and tapping the Note Paper and Pencil icon located at the top-left corner of the screen. A drop-down menu shows. Selecting ‘New Map from selection’ will copy whatever is activated/selected to a new brainstorm map. If you need to make a copy of a node or a group of nodes into the same brainstorm project, it can be done by tapping twice on the node/topic node and there will be icons for copying, cutting and pasting.

Overall, the free version of Simple Mind + for the iPad is very useful and it does the majority of what we need currently. We have not needed the full features of the full version. From the description on the creator’s site for this app, the full version comes with exporting abilities, cross-linking topics and font adjustments.