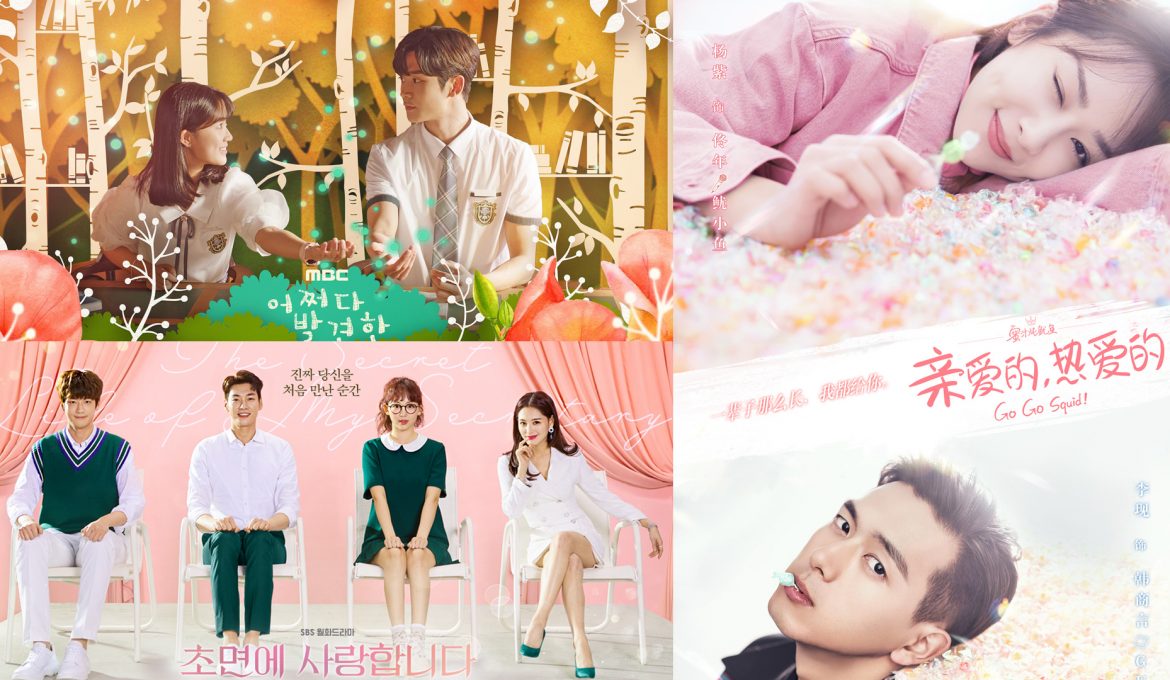 Our favourite dramas for 2019 are a mixture of Korean and Chinese dramas. We enjoy dramas that tend towards being more fun and light in atmosphere. So, our favourites for this year are light and fun. Below, you can find what our favourite dramas are for 2019 as well as other dramas we loved. We have also listed dramas that we stayed around and watched for the majority of the episodes but ultimately couldn’t complete and were a miss for us. We didn’t watch a whole lot of past year dramas this year. We have just a couple of past year dramas that we thought were oh-so-good! :o) :o)

#2 The Secret Life of My Secretary (Korean Drama)

Read our The Secret Life of My Secretary Series Recap

A very cute and interesting drama where the characters are characters from a comic book. The actions and lives of these characters all go according to the plot the author has imagined in the world that the author has created. This is something the female lead character tries to change. While everyone else continue as they are scripted with no awareness they are going according to their character setup of a comic book, the female lead character becomes aware and seeks to change it. The female lead character is an extra character in the comic book. A setup of her character is being the fiancée of a main character of the comic who doesn’t want to be her fiancé and is mean to her. She has no like towards this fiancé of hers. The setup that makes her strive to stop her character from going according to the plot of the comic is her setup of having limited time to live. The writer has written her character to be with a heart condition and she has an ending of dying from it. There is hope when she finds that a guy—a character that is even more insignificant than her character in this comic book world that she exists in—has the ability to enter into scenes that gets performed when the time for them to be performed comes and make slight changes to them. His insignificant character that has no name and is just a face in the crowd allows him to do so.

#4 Nice to Meet You (Chinese Drama)

Nice to Meet You has an opening that immediately gets your attention with the male lead character humiliating the female lead character publicly on such a happy occasion as announcing their engagement at his company’s 50th anniversary. The drama then shows you how the two met and fall in love, but for some reason they come to the point of what happened at the opening of Episode 1.

Hotel Del Luna was a very good drama that we looked forward to watching every week. We enjoyed the lead character and the plot. This would have been ranked somewhere in our favourites list, but the ghost parts of the drama were a bit too much for us. Ghost-themed stories generally aren’t our cup of tea and we tend to not pick dramas with it unless there’s romance and comedy lightening up the spooky and scary atmosphere and the general atmosphere of the drama is light. By the last couple of ghosts, we tuned in just enough to hear the story behind the reason the ghost was existing then we fast forward to when their issue gets resolved.

A period drama which features ministers greedy for power in amongst a plot around a marriage agency that specialises in connecting people to their marriage partners.

It’s got an okay plot with an okay main couple. We liked the plot of the king who started out as someone ordinary because he was sent out of the palace when he was a baby. Then, he suddenly has to take the throne because the king passed away. He’s someone the lead characters know as a blacksmith’s son, so there’s a secret identity going on in the drama which creates interesting scenes. The drama was good enough for us to finish.

This period drama has a plot around a king who’s got a bit of an insecurity towards losing his throne to others who seek to take it or is said to be destined for it. The male lead character is the king’s son. As soon as he was born, the king ordered him to be killed after a shaman said his son would dethrone him in the future and becomes King. This son of the king, the male lead character, survives and grows up not knowing his identity as the king’s son. An attack in his village, the male lead character goes seeking for answers on why they’ve come to attack his village with him being the target. His search leads him to a place where only widows live. He meets the female lead character of whom wants to take revenge on the king for having ordered the killing of her family when she was young. She now lives as a gisaeng in training. Both come to meet and befriend a down-to-earth nobleman. This nobleman is the king.

The story was okay and the two leads were cute, but it wasn’t a drama that was super exciting for us. However, we loved the OST for this drama. Not one of them we didn’t love. Everyone of them were awesome to listen to!

There are times when we just want a drama that is a simple and easy watch with a simple plot. This is what the drama is. Very simple. We see the male lead and female lead clash, antics and that sort of fun stuff.

Clean With a Passion For Now (Korean Drama)