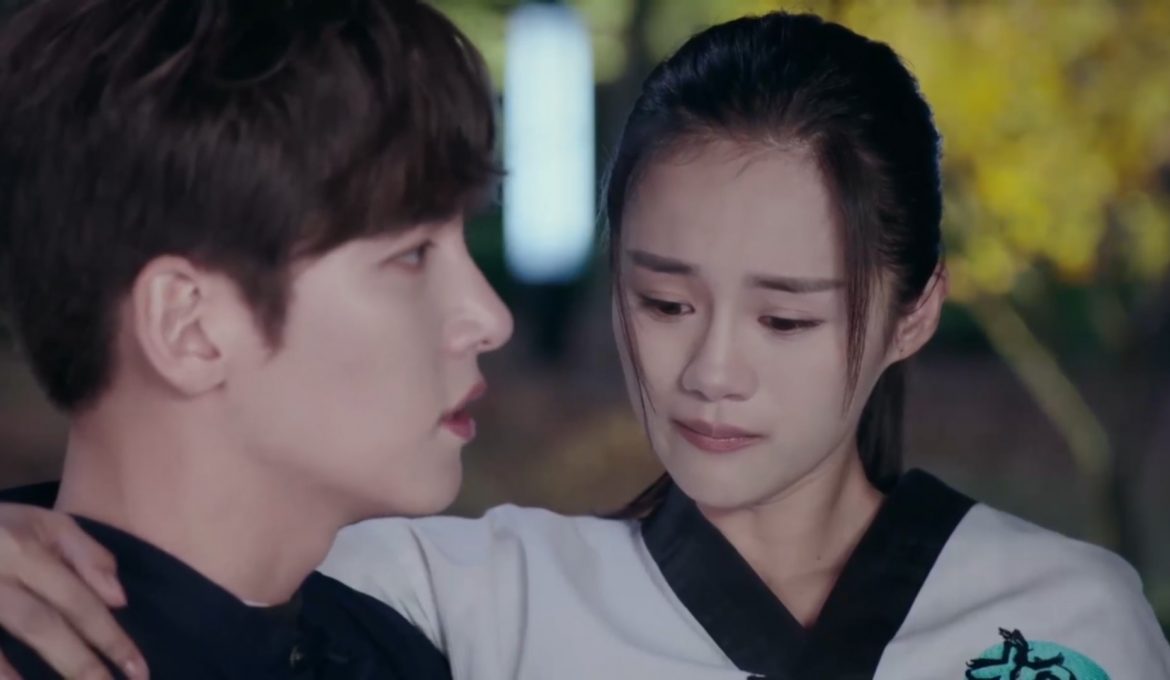 The City Youth Competition is coming in. The whole situation with Xin Song Bai taking over Song Bai had made that plot seem like a past plot. We forgot it hadn’t concluded and it was something that still had to come in. The last time we remember the City Youth Competition being mentioned was during the time when Qi Bai Cao was desperate to participate in it because it was Ruo Bai’s wish.

Episode 20 showed Qi Bai Cao rising through the world rankings of Yuan Wu Dao to qualify for the City Youth Competition. It brought in a new development that is giving Qi Bai Cao a bit of difficulty in participating in it after qualifying for it. This new development feels like it’s moving in the direction of Qi Bai Cao being like Chang An with his leg. We’re worried for Qi Bai Cao. Let’s hope this isn’t where the series is heading. :o/ :o/.

Through the competitions in Frankfurt, Paris, and Rome, Qi Bai Cao gains the points she needs to rank tenth in the world and qualify for the City Youth Competition. Qi Bai Cao knocks out all of her opponents in the final round in each of the competitions.

But Qi Bai Cao might not be able to participate in the City Youth Competition when her right leg gets severely injured. She encounters a group of guys during her time in Rome. These guys were looking for some fun when Qi Bai Cao and Fan Xiao Ying went searching for an ice cream parlour, but got lost and wounded up in an eerie part of town where there was a lack of reception.

With Fan Xiao Ying not a strong fighter, Qi Bai Cao, alone, fought the group of guys who chased the two when they tried to get away from them. Fan Xiao Ying was captured in one of the guys’ hold. Though Qi Bai Cao could stand up against each of them alone, a group of several were too many.

The result comes to be Qi Bai Cao getting struck at the back and at the front of her right knee with a rigid object. She falls over clutching her leg in excruciating pain.

This unfortunate encounter with the guys would not have eventuated had Chang An and Fang Ting Hao not been at it again with each other after the competition. They made the atmosphere full of tension when both didn’t want Qi Bai Cao to choose the other person’s dinner reservation to celebrate her win and her qualifying for the City Youth Competition.

After the event, back home, Qi Bai Cao is desperate to gain back the strength she had in her right leg so she can participate in the City Youth Competition that is in about a month’s time. When no one is around, Qi Bai Cao tries to stand on her injured leg and kick with it, but it’s only pain. She keeps trying, regardless. She even shows Fan Xiao Ying how she was able to do her usual martial arts move after Fang Xiao Ying went to support her and brought her back up onto her feet. But the result is again pain.

Fang Ting Hao helps Qi Bai Cao rehabilitate her leg. It takes a month for Qi Bai Cao to be able to stand and apply weight on her right leg. It’s not yet good enough to allow her to compete in a Yuan Wu Dao competition, though. The prescribed time for her leg to fully heal is three months.

Qi Bai Cao secretly trains in the training hall. Chang An finds her doing so and he isn’t pleased.

Chang An tries to get Qi Bai Cao to think and understand why she shouldn’t train and think about competing in this year’s City Youth Competition. Being someone who personally knows the consequence of ignoring the need to give time for an injury to fully heal, he tells her that if she again sustains injury to her injured leg that’s still in the process of healing, it may have the possibility of never doing so.

But Qi Bai Cao is determined to continue training and prepare for the City Youth Competition. She says that though her right leg can’t be used to attack, she can train up and strengthen her left leg to attack instead of her right leg. She also feels her physique enables her to heal faster than the average person.

Chang An wins. He takes Qi Bai Cao away from training with scooping her up into his arms and heads in the direction of her place. Of course, Qi Bai Cao continues to protest in his arms, saying how she just needs a month. She really wants to compete. However, Chang An is dead set on Qi Bai Cao giving Yuan Wu Dao a break until her leg is fully healed. He tells her to forget about it or else he will not be her instructor. He will also leave Song Bai if she defies him.

“You can try and see if I mean it or not,” Chang An says to Qi Bai Cao as he continues heading away from the training hall and towards her place to have her rest and heal up.

This part where Chang An lifts Qi Bai Cao into his arms was really cool. We loved the expression Chang An had as Qi Bai Cao explained why she thought she was fit to train and compete in the City Youth Competition. We read it as him thinking, “No, Qi Bai Cao. You can keep coming up with ways to get me to see things your way, but I’m not going to see it your way. Give it up. You won’t train. You will rest.” It came across to us as that kind of thought going through a look that was a little like exasperation.

We also found the Chang An-scooping-up-Qi Bai Cao moment a really natural one and not one just for some fluff. The reason why Chang An had to scoop Qi Bai Cao into his arms instead of continuing to drag her out of the training hall was because his dragging had made Qi Bai Cao suddenly stop from the pain that was going through her leg. What else can Chang An do when he must get Qi Bai Cao out of the training hall and back to her place to rest? Of course it’s into his arms! Yeah! :oP :oP. We liked how Chang An was alarmed and concerned when he saw Qi Bai Cao suddenly stop in pain. It was a really cute moment in amongst a serious moment! Awesome.

But this really shows that Qi Bai Cao shouldn’t be fighting until her leg is all healed up! If this kind of force has Qi Bai Cao hissing in pain, then imagine the harsher movements she’d need to endure during fights. Not good…

And Qi Bai Cao is going to go up against Fang Ting Yi as well! Fang Ting Yi is under the robotic and rigid training of Feng Yun who can only win in the competition. Furthermore, scenes of Fang Ting Yi training in Feng Yun is showing her she will for sure be an extremely tough opponent!