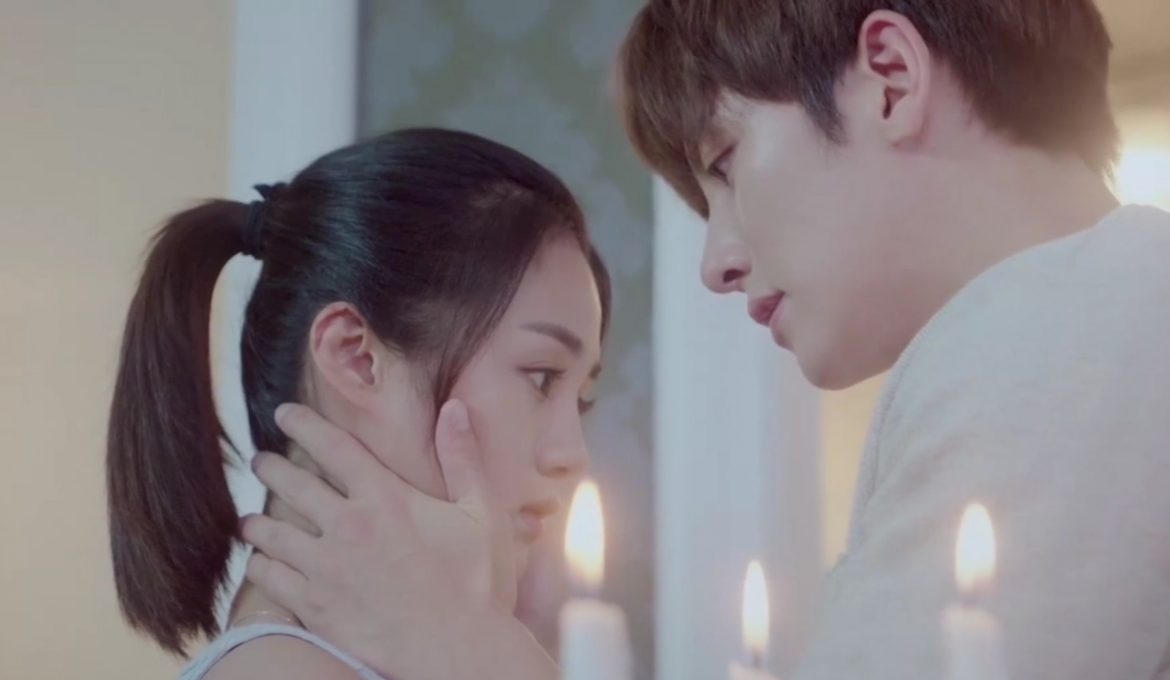 The Three Person Competition begins. In Song Bai’s first challenge round, Fan Xiao Ying helps her team to a win when she knocks out one opponent and disables the other two. She becomes a sensation and gets into the media spotlight. Two hotel event organisers approach Fan Xiao Ying, asking if she’s willing to help them promote their couples water race event that they’re running. Fan Xiao Ying agree to participate after a bit of discussion with her Song Bai members. The prize of the event would help provide them all comfortable accommodation whilst in Singapore for the competition.

Chang An and Qi Bai Cao give a cute pose after completing the race. They form a heart between them. This moment felt like the actors, themselves, posing for the crowd rather than their characters. Then again, these kinds of scenes out in the public always tend to feel like it’s the actors themselves than the characters.

Not surprisingly, the result of the race is Chang An and Qi Bai Cao coming in as one of the top two teams in the event. Also, not surprisingly, is that the two pairs are asked by the MC of the event to give everyone a show of how much of a couple they are with a kiss. The other pair show they are a real couple. They kiss without hesitation. Qi Bai Cao and Chang An who aren’t an actual couple, though, they struggle to give the crowd a show of their couple-ness.

The MC instructs the crowd to help Chang An and Qi Bai Cao along in the kiss with a chant. Fan Xiao Ying also helps provide pressure. She asks Qi Bai Cao to endure it for their accommodation. These words from Fan Xiao Ying offends Chang An when Chang An seemingly reads them as him being excluded from feeling the pressure to kiss or needing to endure a kiss with Qi Bai Cao.

Though we agree that it will most likely be Qi Bai Cao who’d have to endure a kiss with Chang An and Chang An wouldn’t be enduring since he does like Qi Bai Cao and most likely wouldn’t mind the opportunity to show his like with a kiss, it is quite interesting how Fan Xiao Ying only tells Qi Bai Cao to endure the kiss and not both. Does Fan Xiao Ying have a good eye for these things or something?

Fan Xiao Ying does change her words to accommodate Chang An’s dissatisfaction, though. She tells both to endure.

We find out in the next scene that Chang An indeed didn’t find the kiss a hard task, not against his will and seemingly an opportunity he wanted to see through.

“The kiss wasn’t because of a need to do so. It was because I really wanted to kiss you,” Chang An reveals to Qi Bai Cao.

This was revealed to Qi Bai Cao at a couples dinner set up in a hotel room for them for being top two in the hotel’s event. It comes after Qi Bai Cao had accidentally sprayed Chang An with wine when she went to open a bottle at their table and the liquid sprayed at Chang An and his hair.

This scene where Qi Bai Cao helps Chang An wipe off the liquid off of him, we thought it would lead to a scene where they’d be in an awkward eye-locking moment—since it’s usually what happens with scenes like these. But, there was nothing like that—which we were glad about. Qi Bai Cao just helps Chang An dry off of the liquid with a towel in a normal and casual way. It was very cute and definitely much better than an awkward eye-locking moment that has potential for more awkwardness. It was a good lead up to Chang An confessing what he really felt when he and Qi Bai Cao were asked to kiss in front of everyone earlier.

What follows is another kiss that Chang An gives to Qi Bai Cao. Chang An chooses to kiss Qi Bai Cao in the same way as he had done so earlier when they were up on the stage in front of the crowd, but he lets his lips remain longer on Qi Bai Cao’s forehead. This action of Chang An’s came across to us as Chang An being not satisfied with the earlier kiss, seemingly wishing to redo the kiss with more feeling and with less indifference to reflect the words he had just said.

The dinner seems to have not gone through after this when Chang An immediately leaves in the direction of the door. Chang An leaves Qi Bai Cao in thought.

Quite a shame, really. We did want to see, or at least, have indication that Chang An and Qi Bai Cao did have this dinner with each other. Also, Chang An had said that it was a waste if they didn’t sit down and enjoy the food that was prepared for them when he was trying to get Qi Bai Cao—who was feeling uncomfortable with the romantic setting—to sit down and enjoy this meal with him. In the end, the romantic dinner was still wasted. :o( :o(.

Fang Ting Hao heads to Singapore after a meeting with Feng Yun. The meeting has him think about Qi Bai Cao.

In the previous episode, we saw Fang Ting Hao looking at a ring with a dragon symbol after saying goodbye to Qi Bai Cao as she headed off to Singapore for the competition. The ring seems to be the way Feng Yun notifies their parties they want to have a meeting with them.

The meeting revealed a bit more on Feng Yun being quite an influence on Ye Chong when the former female Feng Yun disciple of Chang An’s suggested that it was actually Chang An who had given Song Bai the chance to compete in the Three Person Competition in Singapore to gain back ownership of their hall. It wasn’t the debt Ye Chong owed to Fang Ting Hao for saving his life that gave Song Bai the opportunity. It had to do with Chang An’s defiance towards Feng Yun in returning to them that did. She informs Fang Ting Hao that she was the one who allowed Ye Chong to give Song Bai a chance by having him agree to kicking Chang An out. This of course didn’t eventuate and the former female disciple of Chang An’s seems unconcerned when the Song Bai’s participation in the competition is continuing regardless.

We hear Feng Yun’s plan to expand. They approach Fang Ting Hao with a desire to have his Xian Wu Hall join with them. Fang Ting Hao is of course not interested unless forced—of which Feng Yun attempted to do in the meeting.

Upon checking into the hotel, Fang Ting Hao sees the kiss Chang An gave to Qi Bai Cao on a screen at the counter in the reception area.