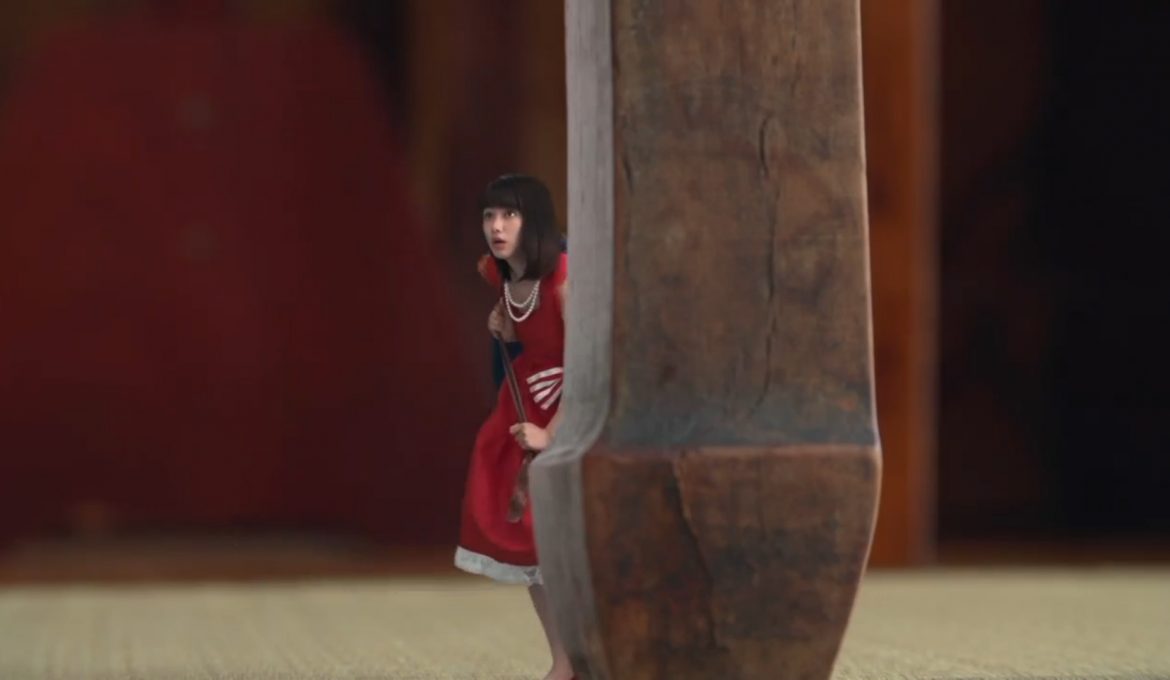 Two weeks since turning small, Horikiri Chiyomi is getting used to the way things are. Minami Shunichi appears to be the same with having her around making things better and doing things without being asked. Thinking Horikiri Chiyomi could do with more privacy when nature calls, he’s gone and brought in a lush ivy plant to replace the current plant. Repotting done, he submits to Horikiri Chiyomi, giving up his handkerchief at her request so she could use it as material for a new dress. Not only that, but he agreeably helps her make the dress, tracing her shape onto it, cutting it out and hand-sews it for her. It’s unfortunate that his efforts, all the pricks to his finger, don’t result in a wearable dress. When Horikiri Chiyomi goes to try the dress, her head gets stuck at the collar.

Horikiri Chiyomi declines his offer to go buy clothes. She wants to try retrieving the box of doll clothes in her room again. Thinking she wanted him to go with her, he objects. He’s out of excuses for going there. Horikiri Chiyomi tells him that she’ll go alone. He doubts she can do it alone, but doesn’t stop her.

The next day, Horikiri Chiyomi sets off to retrieve her clothes just after Minami Shunichi‘s grandmother gets a visit from the policeman informing her the recent spike in burglaries and to be more cautious when answering doors. She gets to her parents’ place and through great effort, successfully climbs the stairs to retrieve a sackful of the doll clothes plus a hair comb and assessories.

The burglar moves around the property to the door Horikiri Chiyomi had not long ago entered through and starts searching the draws in the house. The burglar, a woman in a white mask and hat, is looking for something in particular. We later find out, she’s looking for divorce papers. This is not the same burglar the police came around warning Minami Shunichi‘s grandmother about. The person who’s entered the house is the lover of Minami Shunichi‘s father—Kanae.

Horikiri Chiyomi heads up the stairs. She needs to get to Minami Shunichi‘s room to send a message to him. Mid-way up the stairs, a call comes through to Kanae which has Horikiri Chiyomi stop and watch her speak to who she believes is the Kanae‘s accomplice. It’s not an accomplice, but Minami Shunichi‘s father, Minami Noboru. He’s telling Kanae to leave; but she’s reluctant, saying she’s come this far. She can’t leave empty-handed.

Moments before Horikiri Chiyomi‘s message is sent and received, Minami Shunichi is with Nomura Sayori. It’s the end of the school day and Nomura Sayori has asked Minami Shunichi out on a study date again. He has agreed to study together with her, but advises that they can’t study till too late.

The ex gets confrontational and tries to attack Minami Shunichi, but he is no match for Minami Shunichi‘s martial arts skills, he easily blocks the ex’s attacks. The ex gives up and runs away.

As they continue on in their way, Nomura Sayori turns to thank him for protecting her. She tells him that although what she said was on a whim, she was serious about her future with him and asks him about his feelings for her. She never gets her answer as this is when Horikiri Chiyomi‘s text about a burglar being in the house comes in. Minami Shunichi apologises to Nomura Sayori, only explaining that he has to get home before running off towards his home. He calls home, surprised to find that his grandmother isn’t home. Horikiri Chiyomi is home alone.

Back at the house Minami Noboru arrives. He tries to drag his lover, Kanae, out of the house, but she refuses to leave and goes through more of the draws downstairs. Finding nothing, she heads upstairs for the second time. Minami Noboru tries to persuade her again to stop, but she continues up the stairs. As they climb higher, Horikiri Chiyomi comes up with the idea of switching the stereo on. The music blasts out from Minami Shunichi‘s room which send the couple running out of the house.

As the couple walks away arguing about the divorce papers they didn’t get, Minami Shunichi‘s grandmother catches them leave her place. She doesn’t stop them though as she knows exactly what they came for. As Kanae had indicated, he had come for the divorce papers before, most likely on the day of Minami Shunichi‘s Kendo competition (Episode 4) as he was seen amongst the crowd, watching him with his white face mask on and hat. On this day, Minami Tomiko (Minami Shunichi‘s grandmother) had caught Minami Noboru standing outside their house, posed to ring the door bell after all these years. She never let him get even close to Minami Shunichi or his mother. She chased him away and disowned him, knowing what he was after. Going inside the house, the envelop on top of the open draw confirmed Minami Tomiko‘s suspicions. Her son and lover had come for the divorce papers again and snuck in her house to retrieve them.

Minami Shunichi arrives home shortly after his grandmother enters the house in a breathless state. He is surprised to see her there and tries to see if she had come across the burglars Horikiri Chiyomi had texted him about by talking about how the school was saying there was a burglar around the area, which is why he was so out of breath. His grandmother just tells him that they’re all fine, leaving out the fact that the burglars which Horikiri Chiyomi was talking about was his father and his lover.

Worried about Chiyomi, he rushes up to his room. He calls for her, which has her pop out from behind a plaque, calling him cheerfully: “Minami-kun! You’re home! I’m so relieved.” Minami Shunichi‘s worried expression relaxes to a smile before approaching her to take her in his palm. “So you were safe, huh?” he says with a sigh in his breath. He was worried about her quite a lot!

Later, Horikiri Chiyomi recounts the whole incident to Minami Shunichi. In an animated manner, she tells him how she climbed the stairs vigorously to message him. As she did that, she was almost spotted several times, but in the end she drove the woman and the accomplice out of the house quick-smart with loud music. The guy—the woman’s accomplice—must be a useless guy because he was so indecisive, she tells him, not knowing that she had inadvertently referred to Minami Shunichi‘s father as useless and indecisive. Horikiri Chiyomi‘s story has him wondering why his grandmother didn’t mention about them being burgled. Horikiri Chiyomi reminds him that his grandmother wasn’t home. It doesn’t settle things for him though, still finding it strange.

In the evening, Minami Shunichi is given the answer that the burglar reponsible for all the recent burglaries in the area is a young man in his 20s from his mother. Finding out that the burglar was not the two people who had entered his house doesn’t cause much more thought.

The night ends with Minami Shunichi at his desk enjoying a piece of cake and Horikiri Chiyomi next to him going through the clothes she retrieved from her house. “What do you think? Does it look good on me?” Horikiri Chiyomi asks, having tried on a blue and white striped dress. “I think so,” Minami Shunichi readily offers as he splits his attention between his cake and her. She picks up another dress, wondering what his thoughts are for this next one. He can’t tell the difference he tells her before asking whether she was going to eat cake. She declines, telling him she won’t eat it now as eating it before bed would make her gain weight. The thought then has her stare at herself in the mirror and pinching her cheeks, “Oh no! Did I gain weight?” She asks herself. The question has Minami Shunichi let out a small smile.

Horikiri Chiyomi continues going through her clothes well after Minami Shunichi has finished his cake and is looking at his school books. She’s gotten out of her blue and white striped dress and has put on a white ballerina-like dress. She squeals at the seeing the image of her in the mirror dress. Noticing that she may be disturbing him, she heads out into the night outside and begins to dance. Minami Shunichi, who’s gaze had curiously followed, watches, captivated.

The relationship between them has become quite comfortable now. Horikiri Chiyomi tells that her wish is still to return to the way she was as soon as possible, but sometimes she wishes time could stop. Only sometimes, though.

What a great Minami–Chiyomi episode! It starts off with Minami Shunichi doing things for her; then in the middle we get the first tiny sign that Minami Shunichi prefers Horikiri Chiyomi over Nomura Sayori with the comment about her being quite a tall girl, being super worried that Horikiri Chiyomi might be in danger and rushing home because of it; then we get to see him agree that she looked good in the blue and white striped dress and throw a smile in there, too; and the best part, the end where he can’t help but be curious and captivated by her dance. What great development between the main couple!!

The start and the end of the episode was talking about Horikiri Chiyomi‘s getting used to things and how she wishes sometimes that time would stop. When these kind of thoughts feature, we always worry that things are about to change. Amongst the Minami Noboru–Kanae story which Episode 5 focused on, slotted in were two scenes suggesting that the secret about Horikiri Chiyomi not being in Tokyo and her being small and it all staying a secret is starting to come under threat.

Story is going to get even more interesting!