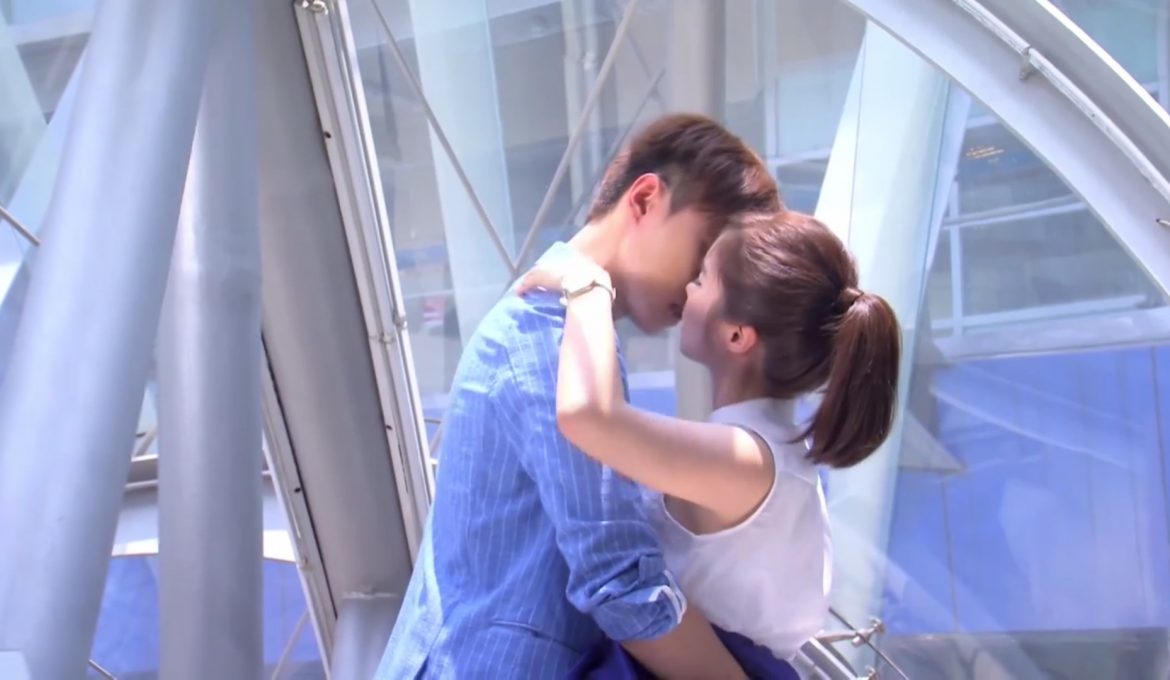 We didn’t see the preview of last week, but had we seen it, we might have seen the kiss that was in store for Episode 15. In all the Asian dramas we’ve seen, this is probably one of a couple we really love (the other series being Rock ‘n’ Road between Chris Wu and Kimi Hsia). Murphy’s Law of Love‘s one is pretty smooth and in our opinion pretty well shot!

The scene takes place on a long, glass-enclosed escalator at the mall. Ji Jia Wei on a step below and Guan Xiao Tong above and facing him as they travel up the long escalator (it looks like it’s one of Taiwan’s largest malls, BigCity, in Hsinchu and it looks very pretty). Here, on a trip to buy a gift for Ji Jia Wei‘s mother, he tells her about the "most important gathering of his life" whereby he hopes the three most important people in his life will attend. Having already arranged for both his father and his mother to join him at the gathering, he sets about inviting Guan Xiao Tong. Guan Xiao Tong who looks to have something on the next day (which is the day Ji Jia Wei is holding the gathering) begins to tell him such; but is interrupted mid-sentence as Ji Jia Wei pulls her in to kiss her, not giving her a chance to decline. They continue all the way up to the top of the escalator. When they reach the top, Ji Jia Wei deftly lifts her up against him and steps off the escalator, all without ever opening his eyes or losing any contact with her.

Very smooth, right? We think so!! The timing was so good. There was no halt stepping onto the platform and no one tripped… Well, if someone did, we suppose it wouldn’t have been included in the scene. Still, what a nice way to shoot the kiss scene.

After this nice scene, things take a turn. Ji Jia Wei‘s family reunion the next day ends with Guan Xiao Tong learning the truth behind his mother’s return: she didn’t come back here because she missed Ji Jia Wei, but because she was here to ask for money to cover her debts in America. What’s more, Ji Jia Wei‘s an illegitimate child whose mother is actually married to another man!

The episode wraps up with Ji Jia Wei learning the information Guan Xiao Tong had kept from him. Guan Xiao Tong finally tells him that his mother solely returned for money and no one else. He gets angry, and for the first time, he yells at her for failing to tell him this, as well as about his mother’s departure despite knowing how much he hates people leaving him without saying goodbye. They part ways as Ji Jia Wei leaves Guan Xiao Tong to find her own way home. Ji Jia Wei arriving back his apartment struggles to forgive Guan Xiao Tong for her actions. He thinks about calling her as he recalls his anger towards her; but in the end is too frustrated to do so. The episode ends with him throwing his phone into his wine collection.

Episode 15 dealt quite a big blow to the Guan Xiao Tong and Ji Jia Wei‘s relationship. It’ll be interesting to see how Ji Jia Wei deals with it all and what becomes of his relationship with Guan Xiao Tong. We usually don’t like watching previews of the next episode, but we couldn’t help it after the dramatic developments. Episode 16 looks good and we shall be patiently waiting.