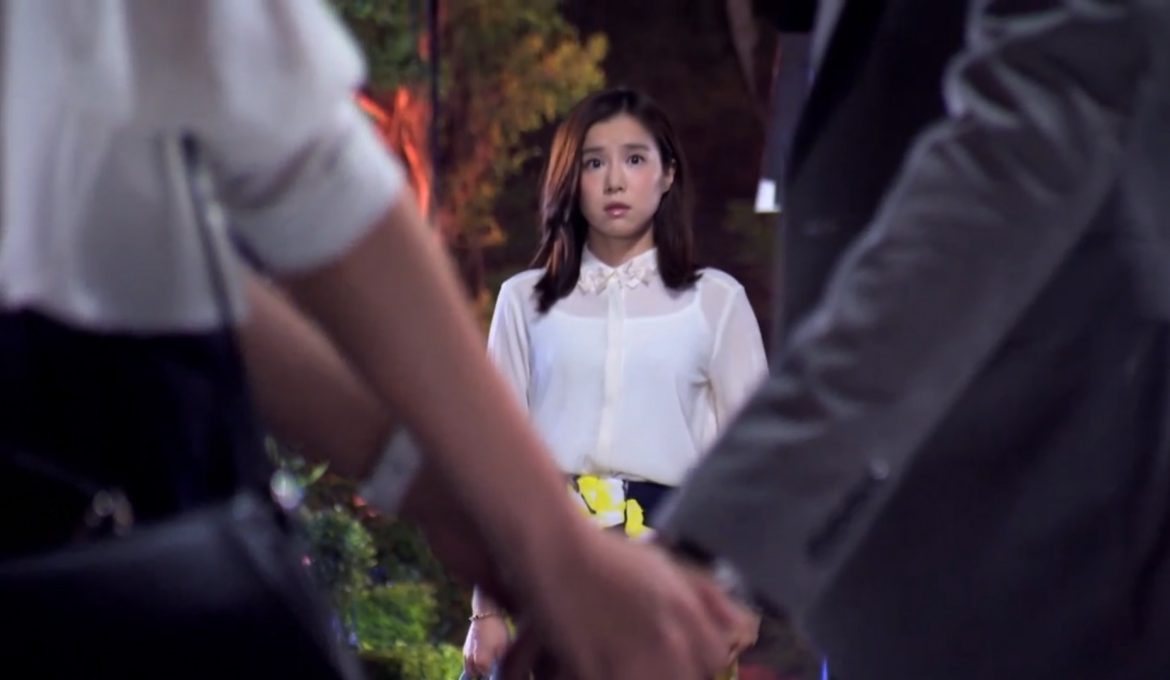 Guan Xiao Tong and He Zhi Yu finally meet face to face in Episode 9 outside Ji Jia Wei‘s apartment (He Zhi Yu had turned up worried about Ji Jia Wei being alone on the day that his mother left him many years ago when he was a child), but there’s not a lot of drama or tension between Guan Xiao Tong, Ji Jia Wei and He Zhi Yu yet. Ji Jia Wei still won’t hear her out or even be in the same place as her for very long; whilst Guan Xiao Tong handles He Zhi Yu‘s return with understanding. She even goes as far as introducing herself with a geniune smile during their second encounter at the cycle polo game.

From the looks of things, He Zhi Yu‘s return into Ji Jia Wei‘s life is not impacting the relationship between him and Guan Xiao Tong. Before He Zhi Yu had come back, Ji Jia Wei assured Guan Xiao Tong that if a person (i.e. He Zhi Yu) were to appear before them that his feelings for Guan Xiao Tong would not change. It looks true enough with the cold dismissive way Ji Jia Wei is reacting to He Zhi Yu and how he quickly come out of his thoughts about his ex to have Guan Xiao Tong back being the centre of his attention and preoccupation.

In Episode 8 when he meets her face to face for the first time since she left him at his friend’s wedding, he was in his thoughts momentarily when he and a Guan Xiao Tong was travelling back from the wedding, but he was back to focusing on every action of acceptance and word of appreciation Guan Xiao Tong sent his way.

In Episode 9, it’s the same thing. After another surprise encounter at a cafe (one which he and He Zhi Yu used to go to together), he was momentarily in his thoughts before he switched his focus to Guan Xiao Tong and he was back to his old self, playing around with her, trying to pull down Guan Xiao Tong‘s wall and get her to be more comfortable around him.

Ji Jia Wei‘s assurance, his focus on Guan Xiao Tong despite his ex being back might be a kind of hint from the writers that maybe we won’t see Ji Jia Wei sway between He Zhi Yu and Guan Xiao Tong. But then, he still hasn’t learned of the accident a year ago. If the series reveals that the car accident wasn’t actually serious and it wasn’t behind the reason He Zhi Yu disappeared a year ago, swaying between past and present loves might still be instore. We’ll have to wait and see. With Guan Xiao Tong being so rational as well as already being well aware of Ji Jia Wei‘s present feelings over the situation (through her chat with Ji Jia Wei‘s online identity, Wayne, on her blog), it might not be a too dramatic affair even if the series did go down that road.

But for now, Ji Jia Wei‘s attention and focus is still very much on Guan Xiao Tong. In Episode 9, Ji Jia Wei Seems to be mighty preoccupied with taking food and drink from Guan Xiao Tong. Not only must he take it, he must take a bite of/drink it before handing it back to her. First it was her cup of coffee then her ice cream.

When they were out earlier in the day, Guan Xiao Tong had gone to get his cup of coffee after Ji Jia Wei made a comment about buying only one coffee for herself. When she came back, he was drinking the cup she had been drinking. Guan Xiao Tong timidly tells him that the cup in his hands was hers (and in not so many words questioning why he drank hers). He playfully retorts, “I don’t see your name on it.” The old Guan Xiao Tong probably would not have had a bar of it, but the Guan Xiao Tong now gives in (Ji Jia Wei’s making progress!). She lets him continue drinking hers whilst she moves to drink the one meant for him. Ji Jia Wei doesn’t let her do that either and takes that cup from her, too. He argues that the second cup was bought for him (so she couldn’t just drink his). He hands back the cup that was originally hers, but not before taking one last sip!

With the ice cream, he and Guan Xiao Tong start off eating their own ice creams. In the middle of eating, Ji Jia Wei makes a grab for Guan Xiao Tong‘s ice cream, bent on eating hers. She does grab it back this time though to carry on eating what’s left of it.

Ji Jia Wei. We can’t help to think that he’s trying to see how comfortable she is with him by testing whether Guan Xiao Tong is okay with eating what he’s taken a bite from and sipping a cup he’s sipped from. Either that, or he really wants to kiss her and is settling for an ‘indirect kiss’. :oP :oP. The writers are pretty good with these Ji Jia Wei and Guan Xiao Tong scenes!

Cool episode. Looking forward to the next one!