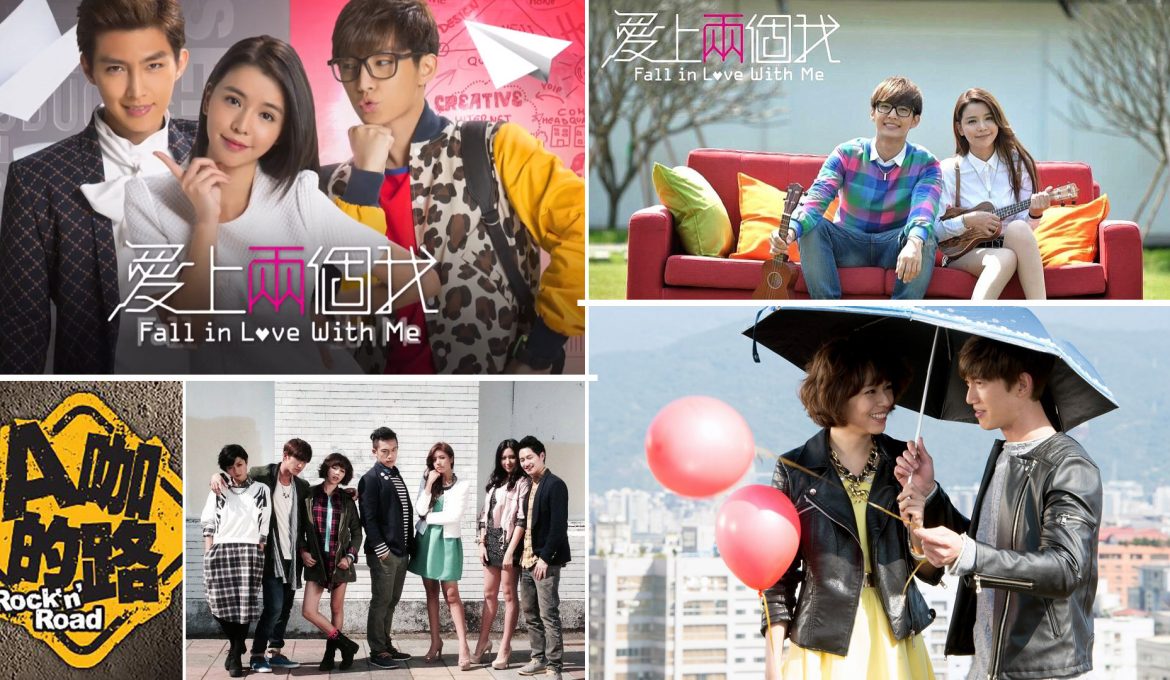 Taiwanese dramas, Rock N’ Road (starring Wu Kang Ren and Kimi Hsia) and Fall in Love with Me (starring Aaron Yan and Tia Li), are the two dramas we’re currently following. As it happens, these two dramas are also currently competing against each other for viewers, occupying the same time slot in Taiwan on Sunday nights at 10PM. The series winning out the time slot is Fall in Love with Me.

Fall in Love with Me is a great watch. Famous and arrogant advertising CEO Lu Tian Xing (Aaron Yan) taking on the guise of gentle-natured film assistant Xiao Lu to try help small advertising agency OZ Advertising that is owned by the late founder’s sister, Tao Le Si (Tia Li)—who despises the CEO but falls for his gentle-natured alter ego—there’s so much goodness in this kind of story. We are hanging out for the time when everything is revealed, when Tao Le Si discovers that the one she despises and the one she likes are in fact the same person, and for the drama to begin!

Rock N’ Road‘s story is less drama-filled; but it too has an element of discovery and revelation to its story which we love. Lin Wei Zhen (Kimi Hsia) is a former A-list child star with a long list of credits; but as an adult, she struggles to make it in the entertainment industry. She is someone with great potential, but her lack of understanding in how to showcase her talents stops her from being noticed and taken seriously.

Her chance comes when the theft of her late father’s song leads her to renowned BS Entertainment music producer, Zhou Shu Yu (Wu Kang Ren). Yang Jia Xin (Nita Li) who was eager to release a song written by her, steals Lin Wei Zhen‘s song and passes it off as her own for Zhou Shu Yu (her producer and boyfriend) to approve for her next album. A series of events involving Zhou Shu Yu finding out the song’s true owners being Lin Wei Zhen and her late father, him attempting to award back some credit to Lin Wei Zhen and delaying the release of Yang Jia Xin‘s album, results in Zhou Shu Yu‘s replacement as her producer.

The decision leads Zhou Shu Yu and Lin Wei Zhen to both resign from BS Entertainment. (Lin Wei Zhen had been given a position at BS Entertainment through Yang Jia Xin prior as a form of gratitude for allowing the use of her father’s song.) They join together with the hope of realising their own wants in life: Zhou Shu Yu‘s wants being to create music without creative restraints that come with working for large entertainment companies concerned more with financial returns than creating great works; and Lin Wei Zhen‘s is to become an A-list star so she is able to make her mother (and father) prouder of her as well as have her own dreams to return to the top realised.

Both the series are the kind that have the potential to develop into an exciting watch. But between Fall in Love with Me‘s story and Rock N’ Road‘s, Rock N’ Road wins our vote. There is a lot more excitement and anticipation seeing Rock N’ Road‘s story unfold—seeing Lin Wei Zhen reveal her potential and make it back up to the top; and seeing renowned music producer Zhou Shu Yu try help her and discover her talent that even he once doubted she had, all the while, have his dreams realised with her next to him.

Wu Kang Ren, this is the first time we have seen him in any series, but already we have become fans of his because of Rock N’ Road. (We have seen two episodes of Substitute Princess / King Flower which he stars in, but since we barely saw the series before watching Rock N’ Road, we won’t count it.) We can’t pinpoint what it is we like about his portrayal of Zhou Shu Yu; all we can say is that there is something about it that is quite absorbing. After Rock N’ Road, we will be on the lookout for Wu Kang Ren’s future projects for sure. We have a feeling we will like most of his projects (like how we had a feeling and ended up liking most of Jiro Wang’s projects and Joe Cheng’s).

Kimi Hsia, we will also be on the lookout for her projects. We really love her character, Lin Wei Zhen. The character she’s chosen to play is strong, optimistic, hard working and is actually quite aware despite her innocent and naïve appearance and manner. Because of how much we love Kimi Hsia as Lin Wei Zhen, we will be very interested in seeing what other characters Kimi Hsia will play in the future!

Rock N’ Road‘s style and music is another thing we love about the series. There is this rock-ish, nostalgic feel that we are really liking. The set, the wardrobe and track choices (we love Mayday’s You’re the One and Only and Jia Jia’s Happiness Coming!!) seem to contribute to this kind of look and feel. We love it.

This series is the kind that has us sad beginning the episode because when the episode plays its last scene, we will have to wait a week for the next episode. This is how good Rock N’ Road is so far for us. Rock N’ Road is a simple, linear story and comparatively less drama-filled than Fall in Love with Me, but Rock N’ Road‘s story, the compatible leads and its great style and soundtrack keeps us constantly checking for the next episode’s release!

Anyone watching Rock N’ Road? What do you think of the series? What about Lin Wei Zhen, Kimi Hsia, Wu Kang Ren and his character, Zhou Shu Yu? Between Fall in Love with Me and Rock N’ Road, do you prefer the former or the latter?