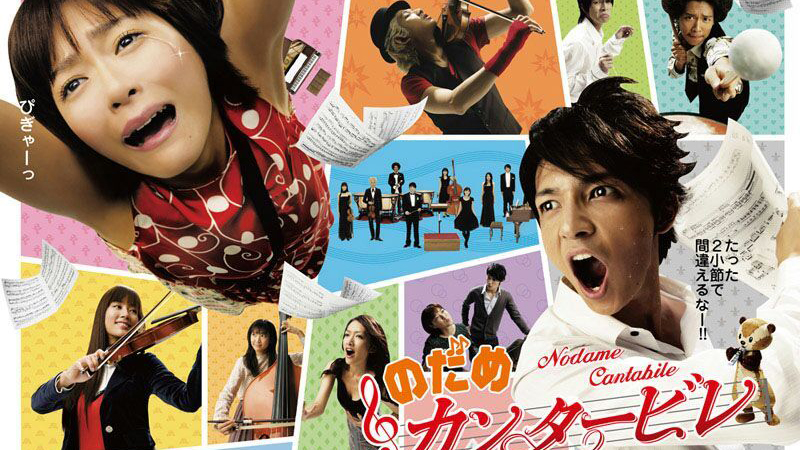 Even being far away, at the bottom of the southern hemisphere, we are still able to get quite a lot of access to Asian series. Having three free-to-air Asian channels available to us broadcasting Korean, Chinese, Hong Kong and Taiwanese dramas, online streaming, online stores as well as having friends who lend them to us we’ve been able to enjoy so many over the years. For our latest post, we thought we’d start a list of our all-time favourite Asian series.

Okay. This is the first one. This one we saw many years ago and it was a pretty popular one. We reckon there probably aren’t too many people out there who watch Asian series that haven’t heard of this series. It’s a Japanese series set on a campus of a music academy, originally a manga that was turned into a live-action series. (Can anyone guess?)

The first one on the list is Nodame Cantabile (Live-Action).

Based on the manga written by
NINOMIYA Tomoko / 二ノ宮 知子

Nodame Cantabile takes us into the world of Classical music. It revolves around Momogaoka College of Music’s top piano student Chiaki Shinichi and underachieving pianist Noda “Nodame” Megumi. They are both exceptionally talented musicians, but events in each of their pasts hold them back from realising their true potential in the world of classical music.

In Chiaki’s final year at the college, his path crosses with the eccentric Nodame. Together with a group of the college’s equally eccentric and passionate musicians they form the college’s second orchestra: the S-Oke. As conductor of the S-Oke, Chiaki learns the importance of appreciating the individual musical abilities of its members as well as to begin to truly enjoy music in all its forms. Meanwhile Nodame is inspired to take part in competitions and work towards performing on the same stage as Chiaki some day.

The two begin a journey together in which they start to develop and grow as pianist and conductor. They grow as people they each learn from, are inspired by and to deeply respect.

Eccentric in personality, anime fanatic, and extremely messy. Hidden behind all of that is a gifted pianist. She is able to memorise difficult pieces and give her music a quality that moves anyone who listens to her. However, she is not regarded as skilled in an academic sense: her performances are sloppy and have a tendency to diverge from the original score. She cannot read music well and rely on her acute hearing to play piano pieces, consequently placing her in the ‘underachieving’ group. Her lack of development is due to her dislike towards serious study of the instrument (which developed from an incident in her past which involved a heavy-handed piano teacher). In her current state, she does not stand a chance in piano competitions. However, taking part in competitions and becoming a professional pianist is not her main aspiration: her aspiration is to become a kindergarten teacher.

Skilled pianist and violinist, multilingual, popular with the female (and some male) population at the college. He is music focused, a perfectionist, and a harsh critic who can be rather insensitive to people’s feelings and circumstances. His dream is to lead orchestras on the international stages as a conductor. He is expected to realise this dream when he graduates by his peers. What he hides is his intense fear of flying and travelling by sea, effectively limiting his success to the shores of Japan. He feels trapped and unchallenged in a place he believes has offered as much as it can: he can do no more and learn no more.

Nodame likes Chiaki and does not hide it from him, even going as far as acting as his wife. Her interest in him developed after seeing him semi-passed-out in front of his apartment (which happens to be next to her own). He is the driving force in her determination to study the piano seriously again. She hopes to perform on the same stage as him one day.

Chiaki is drawn to Nodame—specifically to her piano. On the surface, his attraction goes only as deep as a love of her piano and wanting to see her potential develop; but when Nodame shows signs that she may leave behind her ambition of performing on the same stage as Chiaki (and by extension, him behind), he is genuinely troubled by the prospect.

No series makes us laugh as much as this one. It has this great ability to continuously serve us laughs. The humour isn’t the only great part of the series, though. We love how this series can hold our attention from start to end. Not one moment is a dull one: if it’s not the humour that keeps us watching then it’s the trials and triumphs of Nodame that have our attention; if not Nodame then it’s Chiaki’s explanations of the classical pieces being studied or performed (a lot of the time these pieces complement what is happening in the story, which make the series even more interesting as we try to see if there is anything for us to read into); and of course we can’t leave out the relationship between Chiaki and Nodame, they hold our attention as we watch for any development in Nodame being acknowledged by Chiaki.

Nodame Cantabile is a rare series—rare in the sense that it is probably the only series we can’t think of anything we don’t like. We’ve tried to think of things that we don’t like about the series, but we came up blank.