Home ⁄ Julia and Tania's World ⁄ More aftershocks! And You Can’t Judge a Shake By Its Magnitude 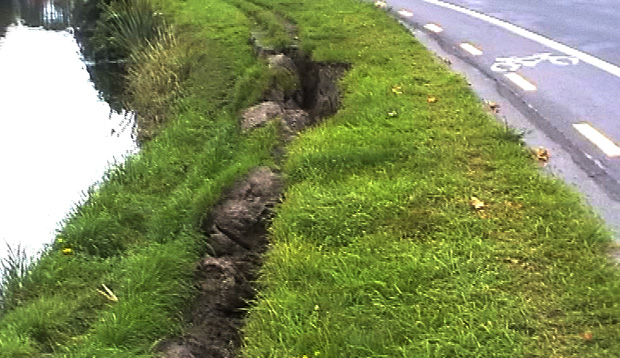 As the magnitude 5.6 jolt—or 5.2 as reported in many U.S. news sites who used the USGS data yesterday—was reported overseas on sites, people left kind comments of “stay safe”, “our thoughts are with you” on comment boxes; others felt sorry that Christchurch was hit with another aftershock. Then there are always one or two people who question why such a small magnitude “5.2” aftershock would even make the news, and refer to our building codes being of low standards. When we had our deadly 6.3 aftershock back in February 22, many did not discount that it was a sizeable shake; but there were also many who speculated that the reason to why so many of our buildings collapsed is due to Christchurch’s/New Zealand’s poor building standard.

We’re not sure why some people think New Zealand has poor building standards. Maybe these people think, since we’re situated deep in the southern hemisphere, pretty much isolated from the rest of the world, we must be this small, under-developed nation that have under-developed building codes. And the only reason any of our structures could possibily fall and crumble from such a “small” magnitude quake, such as a 6.3 or 5.5, is the result of poor building standards.

For people who don’t know, New Zealand has one of the strictest building codes in the world. They in fact follow similar guidelines used in Japan and California. Ever since Napier was hit with a massive earthquake that took hundreds of lives and caused buildings to collapse in 1935, New Zealand began looking at its designs and implemented codes that would increase the building’s ability to withstand large earthquakes. As New Zealand learned more about the seismicity of the country, revisions were made to its building standards to strengthen it even more. Legislation was further revised in 1984, again in 1992, and yet again in 2005 to make sure that, not only new buildings were built even stronger; but existing buildings were also required to be retrofitted to meet these new and stricter standards: these included not just buildings constructed of brick masonry; but also, and particularly, ones built before 1976.

The intensity and impact of earthquakes/aftershocks on the buildings cannot simply be judged by looking at its magnitude. The magnitude measures the energy that is released, but not how hard it shakes. To appreciate the true impact these quakes have, you have to take into account the proximity to the epicentre, the quake’s depth, and duration.

An example of how proximity affects the intensity felt, on March 20 we experienced a magnitude 5.1 aftershock, 10km east of Christchurch, 10km deep. This was felt very strongly. On April 30, we experienced a magnitude 5.2 aftershock, 60km north of Christchurch, 9km deep. This one was barely felt, barely noticeable in fact. Only the sound of a wooden knob at the end of a cord tapping against the window blinds was heard actually. The magnitude of the smaller aftershock was felt strongly, but not the 5.2. If this was reported with just the magnitude and not the proximity (or depth), one would think the intensity felt would be similar.

We don’t have a set of aftershocks we can use to illustrate the point of depth and intensity felt in the same way as the previous example, but we’re sure you can understand that a shallow earthquake/aftershock would be more intensely felt than one deep below the earth’s surface.

What is not reported as widely is how long these aftershocks last. The February 22 6.3 aftershock lasted a long time. Some people have said that it lasted a terrifying 60 seconds! When you couple this length of time up with the intensity of the shake (discussed later), the depth and proximity of its epicenter (which was recorded as 10km south east of Christchurch and 5km deep), maybe you’ll get a better picture of how intense and violent this particular aftershock was.

We mentioned the intensity of the shake in the previous paragraph. The figure that measures the ground movement during an earthquake is known as the peak ground acceleration (PGA), measured with the unit ‘g’ (the same ‘g’ as used in g-force figures). This figure gives off a better idea of the intensity at which the ground is shaking than the magnitude of a quake; and is a more objective measure of the felt intensity than the Modified Mercalli Intensity scale (MMI). If you want to learn a bit about it (like we did), USGS is a good place to visit. Wikipedia’s article on peak ground acceleration is another good place to read about it. You could try searching “acceleration due to gravity” and perhaps “g-force” too.

If you scroll down to the bottom of that same Wikipedia article mentioned above, there is a list of the strongest earthquakes in terms of peak ground acceleration. You will see that although the Christchurch February 22 aftershock measured only a 6.3 on the Richter scale, the peak ground acceleration was recorded at 2.2g. This is more than twice the acceleration due to gravity (1g = 9.81m/s^2 = Earth’s gravity) experienced during the quake. What’s more, a lot of this movement was in the vertical direction. This caused—what GNS Science calls it—a “trampoline effect”, where the layers of earth beneath the buildings were bouncing up and down like being on a trampoline: rock was falling faster than the soil at the top, and before the soil made it back down, rock went back up again, intensifying the shakes. A seismologist expert makes the comparison of the ground as accelerating faster than if one had dropped a rock from a couple metres up.

Study the list a bit more, you may notice how the PGA of the 6.3 Christchurch aftershock ranks second amongst all the quakes listed. Many other earthquakes which were of higher magnitudes didn’t experience the intensity of shaking Christchurch did. Chile’s February 27 earthquake in 2010 recorded an 8.8 magnitude, but its PGA measured only 0.78g; Haiti’s earthquake that occurred last year on January 12 was a magnitude 7.0, but the PGA was only a 0.5g. Scroll down to the bottom of the list of the 9.2 Alaskan earthquake in 1964 and the PGA is only 0.18g.

Then there’s the fact that buildings were already previously weakened by the September 4 Canterbury earthquake back in 2010 (and 5000+ aftershocks between then and February 22). The September earthquake didn’t quite make the same splash in the media like the February 22 did—despite it measuring 7.1 on the Richter scale. This main shock was 40km west of Christchurch, 11km deep, and lasted a very long 40 seconds. No lives were lost and the majority of buildings (even the old historic buildings and pre-1970s buildings in the CBD that weren’t retrofitted up to the standards of the stringent NZ building codes) withstood the shake.

As you can see, a number of factors determine how intense—how impacting a quake is: proximity, depth, duration, ground acceleration, the direction of the force played a factor in it; and having been hit months previously by a 7.1, that also played a factor in the destruction experienced in the heavily, internationally broadcasted February 22 Christchurch quake. The magnitude determines the amount of energy released during an earthquake, yes; but it doesn’t really give people looking in a true appreciation of how intense the shake really is, and therefore cannot appreciate the impact these aftershocks have on structures.

Seismologists say the aftershocks are supposed to decrease in size and frequency as time goes by, but we have yet to see it. They die down then a big one hits and we restart the process again. Before yesterday, we had around about three to six aftershocks a day. Following yesterday’s close proximity and shallow 6.3 magnitude aftershock, we spike right up to 67 aftershocks for the day. What’s more, seismologists are saying they aren’t ruling out more big ones.

This is a worry. These aftershocks are doing more damage to our buildings and family homes, continuously weakening the structural integrity with every hit. As these keep coming, they are slowly eating away at the positive, resilient spirits of people too; and the resolve to remain in the city. We do wonder if these aftershocks will ever stop…

Below are a few of the articles that talks about a lot of the things we mentioned in this blog. You will find articles mentioning the rare combination of things that intensified the effect of the February 22 Christchurch quake (this includes a brief mention of a hidden fault that was discovered that wasn’t mentioned in our blog (link #4)). If you’re interested, click on through!