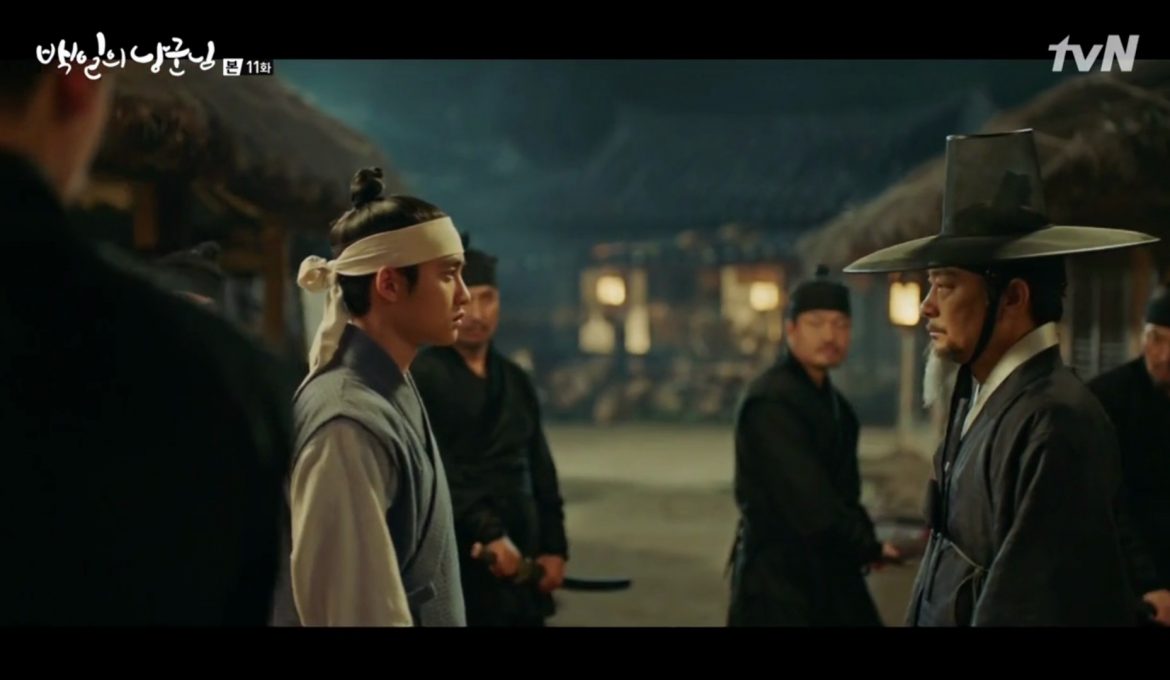 Won Deuk’s agreed to leave with Hong Shim and her brother. According to a shaman, she warns they had better run away quickly because there was a man with a sword dripping with blood out to kill Hong Shim.

Hong Shim and Won Deuk were very interested in hearing out the shaman at first. The shaman sounded like she was able to tell them where they should leave to live well. The shaman also said some very good things about Won Deuk, saying he was as noble and as pure as any man can get in the world and that Hong Shim should to be good to him. That hooked Won Deuk in. But when the shaman started saying Hong Shim might die, that had them put the shaman as a quack. The fact the shaman had told them they had met before on a windy day with snow or flowers falling was proof to Hong Shim she didn’t know anything.

The only thing is, the shaman is pretty accurate about the first meeting, about Won Deuk is and about them needing to take off as soon as they can. Vice Premier, who goes missing long enough to allow the King to make his announcement that he intends to install Prince Seo Won as Crown Prince, is heading their way.

With the rumour about the Crown Prince being found alive revealed to be true by Beom (one of Seok Ha’s men who the Vice Premier interrogated), the Vice Premier looked to be heading to Songjoo Village with the intention to take care of the Crown Prince once and for all. However, when he gets there and locates the Crown Prince under the identity of Won Deuk in the streets during the Dano Festival, he has his men not attack him, but kneel before him, revealing to Won Deuk his true identity. He tells Won Deuk, he can’t possibly let him through because he must go to the palace before addressing Won Deuk as the Crown Prince.

Hong Shim, who was with Won Deuk during the Dano Festival, has been kidnapped. At this point, it’s unknown who kidnapped her or under who’s order it was to kidnap Hong Shim.

Before all of this happened, Jung Jae Yoon’s been doing his investigations on the identity of Won Deuk. After suspecting Won Deuk might be the Crown Prince last episode, he goes to test his suspicions by having Won Deuk sign a second document under the reason of the first one having gotten wet from a spillage. He failed to get Won Deuk to write his name. Instead, Jung Jae Yoon got a tracing of Won Deuk’s handprint. This is the way signatures are for those who can’t write it seems.

So, it’s having Ae Wol hire Won Deuk to help her find a Dano fan she lost. Because Jung Jae Yoon isn’t able to recognise faces, he has Ae Wol meet Won Deuk, draw a picture of him so he could take it to one of the people he knows in the palace to confirm the drawing to be the same appearance as the Crown Prince. That person he takes the drawing to confirms the drawing, allowing to Jung Jae Yoon to finally discover the man he’s been interacting with in Songjoo Village is indeed the Crown Prince.

The Vice Premiere is brought down by the assassins we now know is sent by the King. The order to kill is not accomplished as reports reveal he made an escape. Despite fearing the Vice Premier will send his soldiers after him, he listens to Chief Censor’s words to stay strong and rid his fear as this is the only chance he has to achieve his plan.

The wait to hear Won Deuk say his answer to her question about whether he’d go with her gets Hong Shim so worried, she had tears in her eyes. Although he still never actually says “I will go with you”, he responds that the fact he said he wanted to stay by Hong Shim’s side, it means he will. Hong Shim wipes away tears and takes his hand, happy he’s chosen to go with her.

Hong Shim and Won Deuk meet a shaman on their way to find the others to let them know Won Deuk’s fine. The shaman catch their attention with some flattering words and is open to hearing some good fortune, but when she starts talking about the two needing to run far away else or suffer death, Hong Shim and Won Deuk were no longer happy to listen despite much of what she said being pretty true.

The Vice Premier apparently has escaped from the ambush. Still, the King decisively lets his ministers know he intends to install Prince Seo Won as Crown Prince. The announcement has one of Vice Premier’s men, the Minister of War, voice his opposition to the King making such a decision with the Vice Premier absent.

Jung Jae Yoon shows up at Won Deuk and Hong Shim’s. Hong Shim’s not happy to see the magistrate as she believes it was Jung Jae Yoon who encouraged Park Sun Do to shoot an arrow at Won Deuk. Won Deuk clears things up and reveals he was the one who challenged Jung Jae Yoon to do such a thing as a way to befriend the nobleman.

Jung Jae Yoon’s visit isn’t to see Hong Shim this time, but to see Won Deuk. He’s got a plan to prove his suspicions that Won Deuk might possibly be the Crown Prince. Still, Jung Jae Yoon can’t help to stare at Hong Shim for a short moment which has Won Deuk tell him he can stop staring after blocking Jung Jae Yoon’s view. Hong Shim happily lets Won Deuk put Jung Jae Yoon in his place, too. This scene makes her look like she loves being Won Deuk’s wife.

Jung Jae Yoon tries to get Won Deuk to sign his name on a document but get an outline of his hand like the way villagers who can’t write sign. Won Deuk’s decided to live as an ordinary villager, so of course he has to act the part. Jung Jae Yoon doesn’t get the proof he’s after, but right after that, Won Deuk displays a trait he’s seen the Crown Prince has when in thought. Jung Jae Yoon also found some books which look like they might be ones he transcribed.

Jung Jae Yoon sets Ae Wol on the case. He has her approach Won Deuk (and Hong Shim) under the guise of needing the Solutions Agency to find a Dano fan she lost. Intimidated by Ae Wol, Hong Shim puts up her hand to help instead, but it’s Won Deuk Ae Wol wants. So, Hong Shim’s left with no choice but let her husband go off with a beautiful woman to do the job.

Whilst Ae Wol is with Won Deuk, Jung Jae Yoon shows up before Hong Shim to point out that Hong Shim just might have developed feelings for Won Deuk. She still seems unwilling to admit her feelings as the mention of it has her skip the subject by apologising for getting worked up over the archery incident. As a way to showing how sorry she is, Jung Jae Yoon requests she help him out by accompanying him to the bookstore where Won Deuk was hired to transcribe novels. He learns through the bookstore owner that Won Deuk helped make copies of books in his store. He can indeed write.

Ae Wol returns and reports Won Deuk is no ordinary villager. He was able to tell a fake Dano fan from the real deal. She also provides Jung Jae Yoon a drawing of Won Deuk. This is the real task she was asked to do. Jung Jae Yoon needed Won Deuk’s identity confirmed and he will do it with a drawing which he will use to show to palace guard and friend, Kwon Hyuk, and have him confirm whether Won Deuk is the Crown Prince.

Hong Shim’s feeling insecure and worried he’ll leave her, especially with how she’s actually feeling quite happy. She tells Won Deuk not to recover his memory, not go anywhere and not get distracted. Otherwise she’ll grind him up like she was doing with the stone grinder. She tells him she’s not joking, showing him just how serious she was about not wanting him to leave her side. Won Deuk suggests signing a contract which Hong Shim thinks is a good idea. The kind of contract he’s thinking isn’t the ink to paper kind but a kiss. ^^ ^^

Won Deuk and Hong Shim prepare to say goodbye to their villager friends. Park Bok Eun and Gu Dol get surichwi-jeolpyeon (we think this was the type of rice cake Hong Shim was making) while Kkyeut Nyeo gets a pair of embroidered silk shoes. The gift has Kkyeut Nyeo immediately pick up that this might be a goodbye gift despite Hong Shim wanting to pass the gifts off as gifts given because of the upcoming Dano Festival.

Jung Jae Yoon gets his confirmation from Keon Hyuk that Won Deuk is the Crown Prince.

Hong Shim, her dad and Won Deuk prepare to leave. Won Deuk’s wanting to bring all the comforts he’s purchased, but as they’re going on foot, it’s just not practical to bring everything. Hong Shim’s dad dotes on Won Deuk and tells him he can bring whatever he wants as he will carry it all for him. Hong Shim wants Won Deuk to take what he needs. To get him to do that, she uses her brother to encourage him, saying that her brother doesn’t like materialistic people. He can’t lose favour with her brother, and so he starts removing. Won Deuk is gullible, but so adorable when he’s like this.

Won Deuk gets a bit of a scare when he thinks Hong Shim’s disappeared during a magic trick at the Dano Festival. She returns after a couple flaps of the cloth over the table Hong Shim was lying on.

Later in the night, Hong Shim really disappears. After a marriage proposal from Won Deuk which Hong Shim accepts and a kiss, Won Deuk looks up to admire the fireworks in the night sky, only to see her no longer at the spot she was standing behind him.

Shortly after Hong Shim disappears, Won Deuk runs into a group of assassins at the spot where Hong Shim dropped the flowers he gave her.

Won Deuk finally learns his true identity. He thought about the possibility of being from a noble family, but probably never thought he could be from the royal family! The separation between him and Hong Shim has just become all that more wider! : o( : o(.