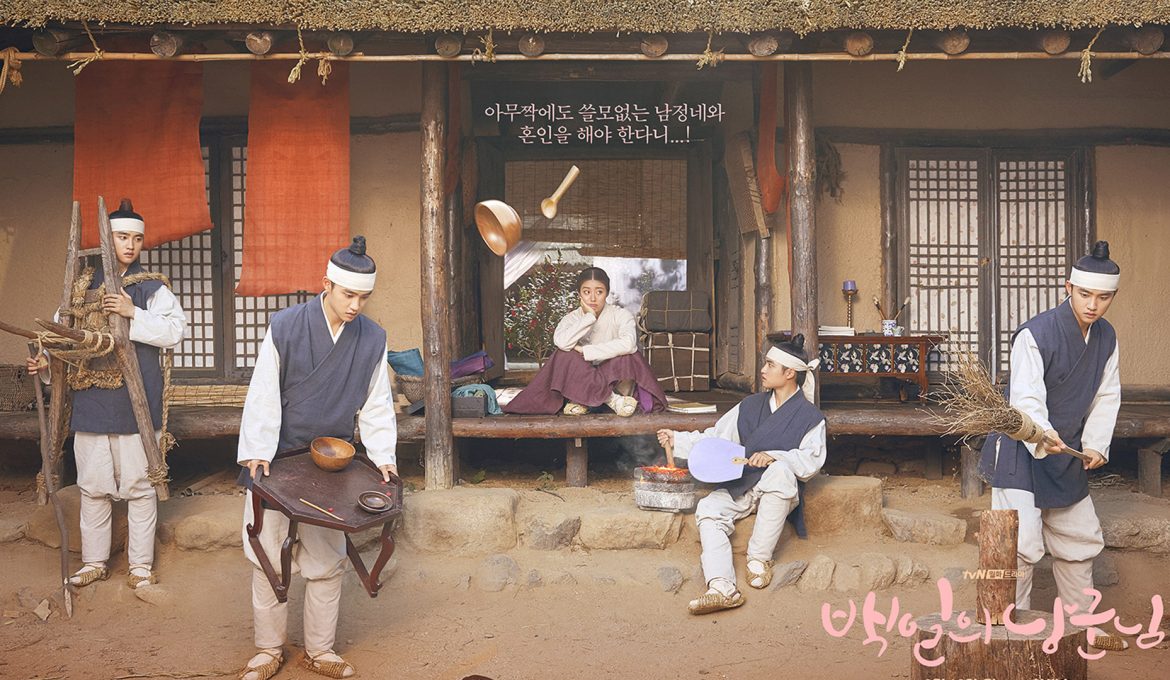 When we read that 100 Days My Prince was about a Crown Prince who forgets who he is and lives as someone else for 100 days, we knew we HAD to watch this drama. And it is as good as we thought it would be!

The Crown Princess had tried to pass the child off as Lee Yul’s by trying to get him to consummate the marriage. Little did she know, Lee Yul had already figured out her plan to use the night she hoped they’d spend together as the night the child was conceived. He rejects her, giving her no chance to save this situation.

The order to assassinate the Crown Prince is given by the Vice Premier. It doesn’t quite go to plan. In a chase through the forest, the assassins think they got Lee Yul when he is shot and forced over the cliff edge. However, the one they killed is actually his personal guard and friend, Dong Joo (Do Ji Han).

This is where the story begins. The Crown Prince becomes Won Deuk, a villager who’s come back from the military just in time to marry Hong Shim (Nam Ji Hyun). He shows up to save Hong Shim from having to become nobleman and ex-Minister Park Sun Do’s (Ahn Suk Hwan) concubine.

As an amnesiac villager, we see Lee Yul struggle in everyday tasks and live averagely. He may have forgotten who he is, but not his expensive taste! He acts like someone from a noble family and spends money like it’s no object. It leads the villagers to dub him as a totally useless man, not knowing just how super capable and reliable he really is because he’s actually the Crown Prince who’s highly educated and highly skilled in martial arts!

The fact Won Deuk is actually the Crown Prince doesn’t get revealed to them till Episode 12, but after a series of fails in doing the simplest of tasks, his useful, capable, reliable-self starts showing itself around Episode 5 and it’s awesomely satisfying. Out of nowhere, Lee Yul will recite and accurately interpret the meaning of poems revealing his educated background, precisely shoot an arrow or skillfully take down a group of thugs with his not-seen-before martial arts skills.

Lee Yul gets to reveal just how handsome he looks in hanbok, too, when he acts as a nobleman for a job Hong Shim took on from a client of her Solutions Agency wanting to make this woman’s lover jealous. Before learning how capable, reliable and how handsome he can look, Hong Shim saw Lee Yul/Won Deuk as nothing but a workhorse she needed to make useful to pay off the huge debt he got tricked into taking from a loan shark. All the while, Lee Yul’s heart seem to never forget his childhood love (that would be Yoon Yi Seo) and quite early on, his heart seems to recognise Hong Shim as Yoon Yi Seo and he develops feelings for her quite early on. But, this job Hong Shim had him take on actually made her worry that her husband might possibly listen to her and act as the woman’s lover till well into the night.

As Hong Shim start developing feelings, the past and present events threaten their happily ever after. In the past, Lee Yul’s father, the current King (Jo Han Chul), had followed advice from the Vice Premier to dethrone his brother because he was such a violent ruler. This had resulted in needing to kill Yoon Yi Seo’s father and everyone at Yoon family’s residence. Yoon Yi Seo and her brother, Yoon Seok Ha (Kim Jae Young), escaped being killed, in part, because of Lee Yul’s actions when he stepped in to order the Vice Premier to not go after her and her brother during the night-time killing.

There is also the matter of Yoon Yi Seo’s indirect cause of Lee Yul’s misery. Her brother was not only Lee Yul’s assassin, but her brother had committed an unforgivable act by loving the Crown Princess which is behind the order of Lee Yul’s assassination. Lee Yul doesn’t see Hong Shim being the indirect cause of his misery. This is all Hong Shim’s view and it’s what causes the strain between them, but as this drama is one that does end happily, the couple does get past the wrongs of the past and present and they do get together.

But, even when the drama finally moves back into the palace where it focuses on getting Lee Yul to discover everything behind the reason for the Vice Premier wanting to kill him, the drama remains light as the upper hand seem to always be with Lee Yul with loyal characters like Jung Jae Yoon (Kim Seon Ho) on his side.

The Queen (Oh Yeon Ah), who is the other side wanting to take the throne through her son Prince Seo Won (Ji Min Hyuk), did a bit of scheming; but again, it was pretty light with her most evil act being her use of talismans on the Crown Prince and the Crown Princess. Where other dramas made the talismans magical and having quite harmful powers, in 100 Days My Prince, the Queen’s use of them did little. The talismans were only used in the story to frame the Queen for the Vice Premier’s assassination of Lee Yul.

In the end, even the King, who looked like he had a desire to remain on the throne, revealed he didn’t covet the throne as much as we thought. The reason the King went along with the Vice Premier’s scheme to dethrone the previous King was because the previous King was a violent ruler. Half a year after Lee Yul comes back from the dead, the King expresses his desire to abdicate so his son could take over so the King could spend more time with the Queen.

Although it looks like it’s only the Vice Premier who’s hell-bent on obtaining the throne, even he seemed otherwise in the end. To save himself from his downfall, the Vice Premier could have used the blank piece of paper he had the King stamp his seal to ensure things went his way, but he didn’t. He used it for his children, the Crown Princess and his son, the Minister of Culture and Education, Kim Soo Ji (Heo Jung Min).

It’s a pretty happy kind of drama, simple in its plot in comparison to some other Korean historical dramas, but so, so good. It’s one of those dramas that does everything right in a really uncomplicated, concise, happy way that makes it such an addictive and entertaining watch. This drama made it onto the list of the highest-rated Korean dramas in cable television, ranking 5th (at present time of February 2019 according to Wikipedia). That’s how well 100 Days My Prince did, and we’re pretty stoked about that, since we think it’s pretty awesome!

Stick around for our 100 Days My Prince Recaps!!