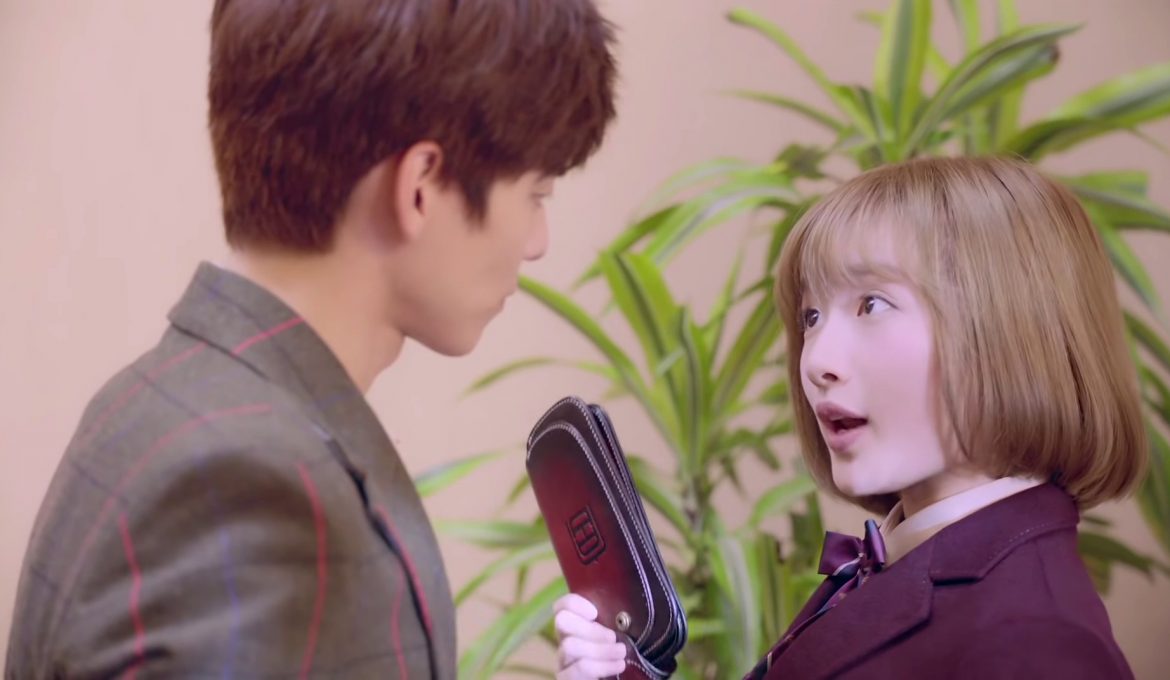 The first episode of this 2018 Chinese drama, Unexpected – 来到你的世界  (lit. Chinese title: “I’ve Come to Your World”), has a very fascinating start. Unexpected has the setup of a manga artist suddenly thrown into the world of his own manga. This manga artist is He Jie (Lin Bai Hong) and his manga is Crystal Love (水晶之恋).

He Jie gets pulled into the world of his manga after avoiding a collision with a truck and hitting a billboard advertising the manga. The billboard descends onto him and he comes to be under the water of Lake Crystal. There’s time for He Jie to swim back to the aperture leading to his world, but his conscience turns him away from the aperture and towards a young college girl unconscious in the water.

He Jie saves the college girl. The college girl is Lu Zi Xing (Li Hao Fei). In He Jie’s manga, Lu Zi Xing is the female supporting character who he describes as being a malicious person with many tricks up her sleeve.

“The most regretful thing in my life is drawing you. Don’t ever think about being the female lead.”

He Jie had enjoyed extreme popularity with his Crystal Love manga. For three years, his talent was also recognised with winning many awards and he was on the cover of magazines. That’s all the past when, before the moment He Jie entered into the world of his manga, he found out that the second installment of his manga is to be written by a fresh talent called Xiao Bai and the female lead character changes from Pei En Cai (Huang Yi Lin) to Lu Zi Xing without consulting him. Edits have already been giving to him, a press conference already held without his knowledge and then there’s the billboard advertising the latest installment of his manga that he veered into the pole of the billboard to avoid collision with a truck. It was already made and displaying out on the streets.

He Jie blames all of these unfortunate things that happened to him on Lu Zi Xing.

He Jie is enraged when he finds out that the girl he saved and is accusing him of being a pervert is the villain character, Lu Zi Xing, in his manga. The two come to be at Crystal City Police Station when Lu Zi Xing finds He Jie’s action of going in to perform CPR on her as indecent assault from a pervert. Lu Zi Xing denies jumping into the water requiring He Jie to save her through performing CPR. She says she’s a timid person who can’t swim or be near a lake. He Jie strangles Lu Zi Xing as he says Lu Zi Xing is lying about not being able to swim or go to the lakeside because she learnt to swim at the age of three, caught fish at the age of six and she works at a coffee shop by the lakeside. Lu Zi Xing is quick on her feet. She says He Jie knowing this much about her is showing himself to be a stalker.

This sees He Jie placed in another room and told to wait quietly. He is then informed by someone who goes by the name, Luo Ji—a head of the police department who knows everything about who He Jie is and where he came from—that Lu Zi Xing’s welfare is vital to his survival. In order for He Jie to return back to his world, he must complete a mission that has to do with Lu Zi Xing.

“You came into this world because of Lu Zi Xing. Your mission therefore has something to do with this woman called Lu Zi Xing.”

“As the writer of Crystal Love, you are brought into this world by the force of the malicious female supporting character, Lu Zi Xing, and her powerful resentment. Furthermore, your fate and her fate came to be tied together at the moment you entered.”

He Jie also has to achieve one other thing. The ending of Crystal Love is said to have seen a happily-ever-after for the male lead and female lead. Lu Zi Xing, the female supporting character, had a miserable end. Lu Zi Xing committed suicide at the moment the male lead and female lead characters exchanged their rings. And so, on top of his mission of changing the miserable fate Lu Zi Xing has at the end of his manga, He Jie must also have Lu Zi Xing say one line. This line must be exact. It can’t be a word less, a variation of it or spoken in a different language. The line He Jie must have Lu Zi Xing say is:

He Jie says the mission is out of his depths when handling woman and death are two things in the world he is most afraid of. Luo Ji tells him he has a special item that will provide him a bit of assistance. This help comes in the form of a magical pen that allows him to draw anything and it materialises into the real thing.

Offering Lu Zi Xing money is He Jie’s first attempt in changing Lu Zi Xing’s miserable fate. Looking for Lu Zi Xing’s home on Rainbow Road, he coincidentally finds Lu Zi Xing at Niu Sheng’s Noodle Shop where he stops to have something to eat. He Jie goes to Lu Zi Xing’s table after finishing paying his meal with some money he materialised through drawing a bundle of notes.

“I know all your worries and the origins of your worries. Also, I am the only one who can resolve your worries in this world. You want to rely on yourself? You can’t.”

“How are you going to resolve them?”

“I’ll give you money. I know you love money. You need money. Furthermore, I can give you all the things you want so long as you’re willing to listen to me.”

This first attempt doesn’t bring any results. Lu Zi Xing finds He Jie arrogant when she isn’t pleased to hear that he believes he can buy her with money. Lu Zi Xing tells He Jie to not harass her again. Otherwise, she will report him to the police.

He Jie’s next move is to make sure Lu Zi Xing doesn’t fall for the male lead, Gong Cheng (Huang Jun Jie). Gong Cheng is described as every girl’s dream. He’s handsome, smart and wealthy. He is the heir to a group called, Gong Group. Like Lu Zi Xing, he is a student at Crystal College. Li Zi Xing going to Gong Cheng is said to be what brings Lu Zi Xing to go on the path of a miserable end for her at the end of Crystal Love.

To stop this scene from eventuating, He Jie goes to make Gong Cheng become just another insignificant customer in the coffee shop whilst he, himself, becomes the person who makes the encounter with Lu Zi Xing and makes an impression on her.

He Jie further shows his impressive person to Lu Zi Xing when he helps her pay off the money her family owes to loan sharks. Lu Zi Xing’s father had brought the loan sharks to the coffee shop, telling them his daughter has the money to pay them back. He Jie presents a blank cheque to the loan sharks and says for them to fill in the required amount.

This brings in the next event in the manga. Lu Zi Xing attends a ball that He Jie says is one held by Gong Group as an event to bring Gong Cheng and Pei En Cai to meet and get to know each other. In the manga, it sees a missed dance between Gong Cheng and Pei En Cai and an opportunity for Lu Zi Xing to be a dazzling lead for the evening. Lu Zi Xing is told to have purposefully spilt red wine on Pei En Cai’s dress. This got her out of the way and allowed Lu Zi Xing to become Gong Cheng’s dancing partner for the evening. He Jie indicates he will change this.

“Watch and see how I manage you.”

So, in Episode 1, there’s this hate-hate relationship built between He Jie and Lu Zi Xing which makes the relationship side of things interesting. There’s also Lu Zi Xing coming across as quite the underdog. So, she’s someone who we are already rooting for to have a happy ending. We can’t see what that happy ending would look like at this point, though. This is also something that keeps us interested in the drama.

Being curious to see if the manga He Jie wrote is an actual manga, we searched and came across a 2002 drama of the same name. In English, it’s called Romantic Crystal Love. We didn’t go into reading too much about Romantic Crystal Love, but that drama and this drama is set in school and the male lead character and the two main female characters seem similar to the one in He Jie’s Crystal Love manga.

The developments in Episode 1 shows a lot of potential for a good watch. We are eager to continue onto Episode 2. We’re particularly curious to see the female lead character, Pei En Cai, enter. There were only mentions of her in Episode 1. So, Pei En Cai’s entrance is what we’ll be looking forward to seeing in the next episode. We want to see why He Jie describes the pairing of Gong Cheng and Pei En Cai as ‘sprinkling on sugar’ while he describes the pairing of Gong Cheng and Lu Zi Xing as ‘stepping on a mine’.