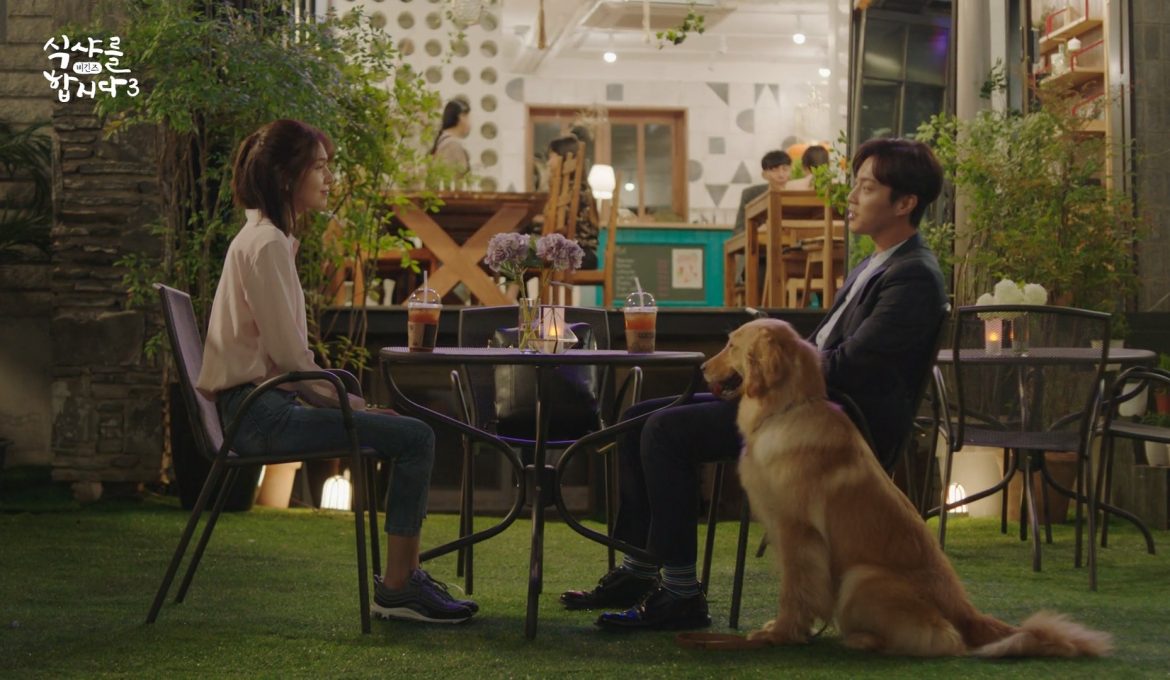 We watched the first Let’s Eat and really enjoyed that. Let’s Eat 2, we can’t say much about since we only clicked in for the first few minutes before clicking out. That’s not an indication that the second Let’s Eat was bad, just that it was a quick judgement of the opening scene we thought we’d leave it for another time. Clearly, we‘ve yet to go back to it. We might go back one day and watch it, though. Let’s Eat 3, we just finished watching, and it’s not how we would have liked things to go, but surprisingly we think we like it.

Before continuing, we should warn that if you’re in the middle of the drama and don’t want the story spoiled, we suggest to hold off reading further. There will be spoilers from this point on.

Goo Dae Young’s state looks like it has to with having lost his love, Baek Soo Ji (Seo Hyun Jin) in a bus incident two years ago. He appears to have lost all energy. At work as a financial consultant selling insurance, he stares blankly at the computer, completely not focused on his work. At home, he lays on his sofa staring at the ceiling with some drama in the background.

When we realised this character was from Let’s Eat 2, we had a sneaking suspicion we might not see a traditional happy ending where the two leads end up together early on. What made us think this is that it’s only been two years since Goo Dae Young had lost Baek Soo Ji and there’s an engagement ring on his finger.

We couldn’t imagine he could let go of Baek Soo Ji and fall for Lee Ji Woo in 14 episodes. Goo Dae Young was still thinking about the bus incident in Episode 2 and that ring didn’t come off his finger until the last episode. When he chose to no longer wear the ring, it was only after he forgot to put it back on in the morning. When he learned it went missing later in the night, he left Lee Ji Woo waiting on the side road to head back to the restaurant he thinks he left the ring before searching through garbage bags for it.

As much as it made sense, we so wanted the leads to get together. As it turns out, it was a love story 14-years in the making. Let’s Eat 3 reveals that Lee Ji Woo is actually Goo Dae Young’s first love, and he was hers. Back then, both had liked each other. It started with Lee Ji Woo liking Goo Dae Young early on before Goo Dae Young finally realises his own feelings for her just before he left to serve in the military.

The two never saw each other again each other after the military. Lee Ji Woo had kept in touch with letters for a while, but when her stepfather passed away, she stopped writing to him. Lee Ji Woo moved out of the apartment following the death of her stepfather, leaving him nowhere to contact her when he had a some vacation time to go visit her. Making it worse, when he asked his friends to find out what had happened to her, people in Lee Ji Woo’s class misinformed she had started dating. This all went back to Goo Dae Young, and although we don’t see much more beyond this part of the story, we’re assuming the two separate from this point on.

Lee Ji Woo is not only Goo Dae Young’s first love, she’s actually the one who got Goo Dae Young onto the path of a food connoisseur and becoming the popular blogger Mr. Let’s Eat. Before he met her, he seemed to know when something taste great, but why it tastes great, he had no idea. He also didn’t know how a dish should be eaten in order to bring the dish to even greater heights of deliciousness and enjoyment. It was Lee Ji Woo who had enlightened him, showing him and his three university friends how to enjoy all the food and drinks they had during his university days. The way he likes to talk and explain the dishes in front of him is all thanks to Lee Ji Woo.

It makes us wonder if there will be a fourth installment. The story feels like it could be a set up for another installment. But then, Let’s Eat installments have so far never had the same female lead character return. So, if there was to be a Let’s Eat 4, we might only see a little flashback of how the two parted ways before the new female lead character becomes the new woman in Goo Dae Young’s life, just like how we saw a little flashback of how Goo Dae Young lost Baek Soo Ji in this drama before making Lee Ji Woo be the new woman in his life.

Nonetheless, here’s hoping. We think Lee Ji Woo deserves to be Mrs. Let’s Eat. After all, everything started with her, and it feels like it would make things come full circle with a fourth installment seeing the two finally get together. Romance dramas should all be like that : oP : oP.

But if things turn out that there is no further installment to Let’s Eat or Lee Ji Woo doesn’t return as the female lead character if there were one, Let’s Eat 3 would still be worth watching. Goo Dae Young’s recognition of his feelings for Lee Ji Woo back in his university days is still quite a satisfying sight to see, despite it not being his present feelings.