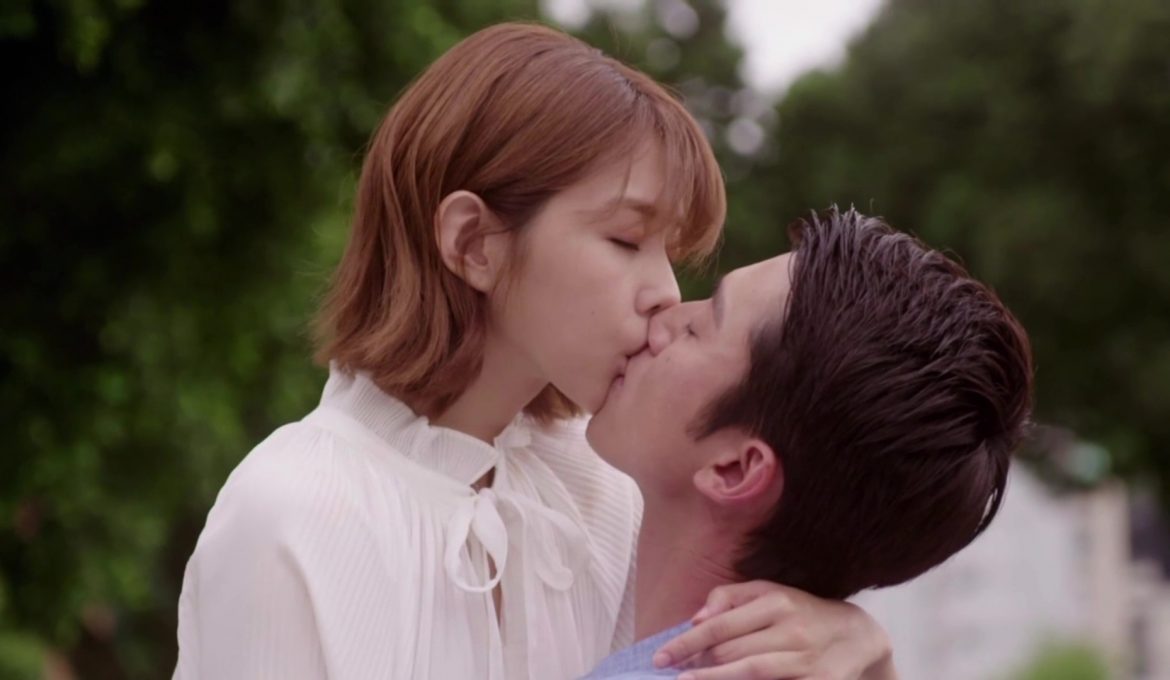 Final episode of The Perfect Match. It continues with Wei Fen Qing and Huo Ting En being separated—separated by the misunderstanding they have of the actions of the other. It’s the only thing stopping the two having a happily-ever-after with all other obstacles cleared for them.

Wei Fen Qing thinks Huo Ting En doesn’t want to see her. A third visit to where she had found Huo Ting En’s food truck, she finds it’s no longer situated there anymore. This has Wei Fen Qing believe she had overthought the secret message she had believed Huo Ting En had sent her when she went to buy his curry sandwich from his food truck. The pottles of seasoning grouped in 5319 wasn’t his message saying “My heart remains the same” or “I still love you” when he grouped five pottles of seasonings labelled, 5,1,9,2,0, on his preparation table.

Huo Ting En thinks Wei Fen Qing doesn’t want to have anything to do with him.

A male stranger calls Peng Xiao Bin’s phone to let him know he had found Huo Ting En’s phone that Huo Ting En didn’t know was missing until the call. This stranger informs Peng Xiao Bin the woman in the picture on his phone—that is, Wei Fen Qing—was not willing to make the call to return the phone.

Mr. Huo, tell me: selling this Jiamei Chicken, is it not to force Miss Wei to come out and see you? Can you tell me your true motive?

You clearly said you didn’t want to see me. Why, then, did you use a secret signal to tell me 51920 (I still love you/I have loved you all this time)?

That’s because… the person who couldn’t let go of you is me. Okay. I did wrong. Mr. Lawyer, what you said is right. I did this because I have some remaining feelings towards Miss Wei Fen Qing. I hoped, I hoped and maybe expected that one day she’d come eat, know about the feelings I have towards her and come and look for me.”

Huo Ting En lets Wei Fen Qing know why he hasn’t looked for her when Wei Fen Qing asked why it had to be her who looks for him.

Wei Fen Qing still asks Huo Ting En why he hadn’t looked for her because she feels Huo Ting En should know about the fact of this incident between her dad and his stepfather being a misunderstanding.

“My mum already said it. It was a misunderstanding. Your dad didn’t cause the death of my dad. Didn’t I tell Little Xiao Bin to tell you? Why didn’t you come back and look for me?”

Ah Wei also tells Wei Fen Qing that she can be the one to look for Huo Ting En.

“If he won’t come look for you, we can go look for him. Who said guys have to be the one to make the first move? Isn’t that right?”

“Have you ever thought that she has changed herself for you? Have you changed yourself for her? You haven’t. I know the difficult road Wei Fen Qing went on. What about you?”

Peng Xiao Bin asks Huo Ting En to have more courage, let go of his pride and allow himself a chance to obtain happiness.

The mention of seven days, Huo Ting En asks Wei Fen Qing to allow him seven days to win her back.

“Seven days. Chairman, please also give me seven days. Give me a chance to win you back. I realise I was wrong. I shouldn’t have left you alone. I was so selfish. What happened in the last generation has nothing to do with us. I’m sorry. It was my ego that caused all the trouble.”
“On the first day I came to know you, you had already completed me. You’ve made my life complete. I’m sorry. Give me a chance. Just me one more chance to let me win you back.”

“You spoke too many words. There’s no need for seven days. I can agree to it now.”

The end of The Perfect Match!

We find we’re again indifferent to this final episode. There wasn’t anything we particularly liked or disliked. The series as a whole: we are disappointed. The point where Huo Ting En gets kicked out of the Huo family, it had gone downhill for us. This was from Episode 17 onwards.

Before this point, we were enjoying the series. Though story and drama was on the light side, we felt there was something there in the story for us to keep watching. We think the many funny and refreshing moments between Huo Ting En and Peng Xiao Bin were what kept each episode fun to watch and had us continue on to the next episode.

When we first heard that Wu Kang Ren and Ivy Shao were going to be paired up and play the lead characters in this series, we were very excited. During the first half of the series, we thought there were some cute moments for their characters. There were some cute interactions between them as chef and apprentice. But, it didn’t get beyond that. We never really were convinced Huo Ting En and Wei Fen Qing were a couple that matched.

They didn’t match up to any of the previous pairings we’ve seen the two actors in.

Ivy Shao’s, Ye Zhen Zhen, with Marcus Chang’s, Chen Che, in Back to 1989 is still our favorite pairing for Ivy Shao. Mentioning the pairing, we can still remember how sweet the two were! Makes us want to watch Back to 1989 to see the pair again!

For Wu Kang Ren, there are so many! We’re huge Wu Kang Ren fans because there are so many dramas with pairings with him that we totally love! There’s Wu Kang Ren’s Ouyang Tai with Nikki Hsieh’s Jin Da Hua in Princess’ Stand In. So, awesome this pairing was because he is a second male lead who actually had characteristics of a lead who has a lot of screen time with the female lead! Wu Kang Ren’s Zhou Shu Yu with Kimi Hsia’s Lin Wei Zhen in Rock N’ Road. So, so, so cute they were! We liked Wu Kang Ren’s Sun Yan Jun with Lorene Ren’s Mo Han in The Crossing Hero. This couple was surprising, but they were awesome, too! We also liked Bai Zong You with Jade Chou’s Li Yu Hua in What is Love. Who doesn’t love a cocky player who becomes a one woman man?

So, The Perfect Match didn’t end well for us. It’s so sad because we really were expecting to have watched another great Wu Kang Ren drama by the end of the series. But, it didn’t turn out that way. We couldn’t connect to the story or the characters in The Perfect Match.

We hope to see Wu Kang Ren in a better written drama soon. Ivy Shao and Ben Wu as well.