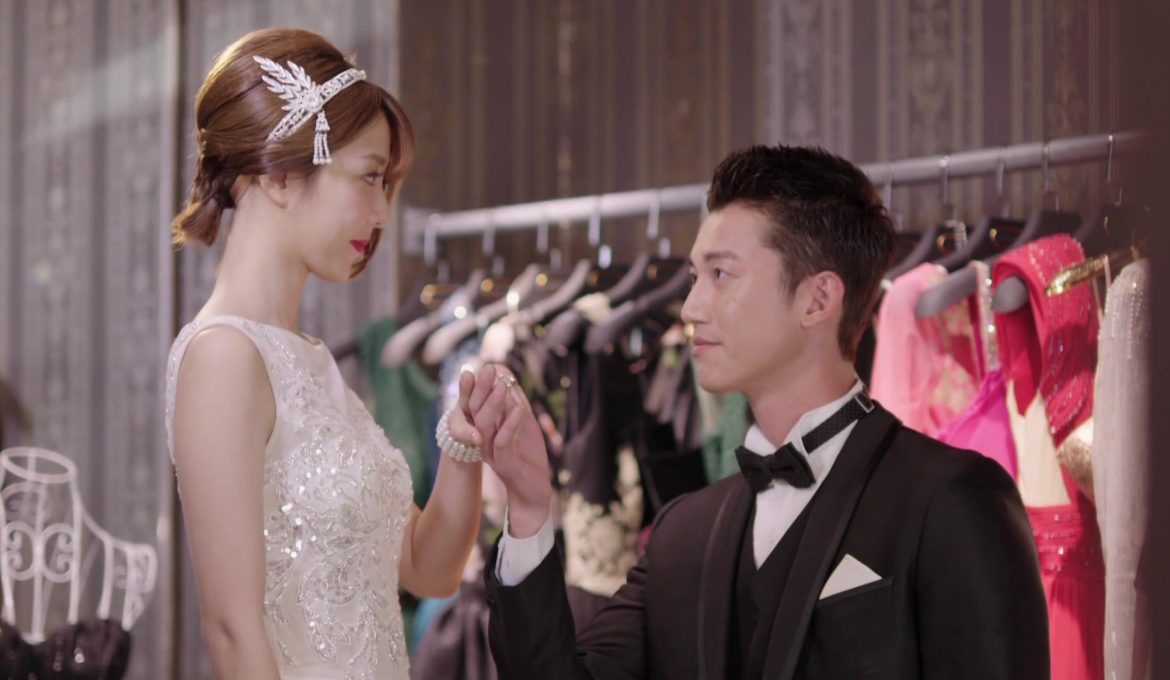 A different atmosphere from the last episode. It’s still got the funny comedy that we’ve been seeing in the previous three episodes, but it’s got a bit of dramatic and seriousness to it. It was quite refreshing feeling a slight change of atmosphere in the episode. Although, we did find the episode having quite a period of lull and so it was somewhat slow-moving to begin with.

The situation in the first half focused on Huo Ting En waiting for Wei Fen Qing’s call to tell him whether her choice is going to be La Mure or the night markets. This comes from Huo Ting En overhearing the night market crew talk about ways to use Huo Ting En and La Mure to sell their food.

In between these scenes is talk of President Wang’s birthday wine party that was hinted in Episode 3. We see Huo Ting En eating lunch and having a casual talk about the wine party with his mum and Huo Tian Zhi. Meng Ru Xi and Wei Fen Qing come into their conversation.

The outfit choosing scene was not really interesting. We see Wei Fen Qing try out some pretty dresses and Huo Ting En trying out odd-looking suits. The final outfit each choose to wear were very elegant, but very normal and safe.

We were indifferent to the dance scene between Huo Ting En and Wei Fen Qing that came in to help train Wei Fen Qing to walk on heels that she wasn’t used to walking in.

The episode then picks up in excitement around the middle-end section of the episode. Challenges that fall on Wei Fen Qing have always been interesting for us. And this is the situation closing the episode. The end scene, we can’t say we know for sure what the result will be, but it sure feels like President Wang is going to break out into a—”Hou hou mei ahhhhhh! (It’s so gooooood!)” exclamation. Well, we’re expecting something like that. It sure feels like he’ll break into one of those exclamations. Haha.

We said in our previous episode’s recap that we were underwhelmed by Ah Wei’s character because he hasn’t appeared enough and doesn’t stand out.

In this episode, Ah Wei still doesn’t really appear much, but he sure does stand out. It looks like his story is about to come in. With Ah Wei being briefly shown in a rather stylish attire and not his usual apron over comfortable working clothes, and how he seemingly knows his wines, he’s looking to be someone more than he appears to be. Ah Wei’s hiding from a person like Meng Ru Xi when he sees her in the night market and Meng Ru Xi becomes teary after verifying it was Ah Wei she saw earlier.

He also has the ability to obtain tickets to President Wang’s birthday wine party that Huo Ting En and Meng Ru Xi are invited to, simply by going to the company and asking to meet with President Wang.

Huo Ting En is extremely nervous and jumpy around Meng Ru Xi. He’s constantly trying to make people come back so he’s not alone with her. We find out that Huo Ting En’s lack of interest in Meng Ru Xi is because he wants to have the freedom to love. Meng Ru Xi is his mum’s choice. When talking to Peng Xiao Bin about choosing Wei Fen Qing to go to the wine party with him, Huo Ting En made it seem like Wei Fen Qing is someone who’s conveniently there who can help him stop his mum from telling him to be with Meng Ru Xi.

We quite like the pairing Ah Wei and Wei Fen Qing. In this episode, we had a small moment of second male lead syndrome. Ah Wei really does think about and care about Wei Fen Qing a lot.

Wei Fen Qing initially declines Huo Ting En’s offer to carry her on his back, but she takes up the gesture when Huo Ting En say he’s simply being a comrade of hers. He has her remember her words earlier in the day of not abandoning comrades to understand his current action.

Some amount of time carrying Wei Fen Qing and supporting the box of eggs in the bad weather, Huo Ting En finds continuing on in this way isn’t a solution. He suggests for them to take a rest at a pavilion he’s able to see nearby.

They reach the pavilion and Huo Ting En seems to need the much needed rest as he sits down, puffed. Meanwhile, Wei Fen Qing looks on with a concern in her expression. It seems as if the only solution is to continue in this way. However, they hear the sound of a motorbike. Wei Fen Qing quickly goes and gets the attention of the motorcyclist. She’s surprised when she finds the motorcyclist is Ah Wei. Ah Wei explains, it’s that he knew it was going to be difficult up in the mountains and worried Wei Fen Qing would get lost so he came to check.

Wei Fen Qing sees Ah Wei as a true comrade who comes when she’s in trouble. It’s a tacit understanding between them, Ah Wei calls it. He says this smugly facing Huo Ting En.

Wei Fen Qing asks Ah Wei to quickly take Huo Ting En down the mountain so Huo Ting En can return back to it with the Reishi eggs needed for tonight’s service for VIP diners. Ah Wei doesn’t want to, however. He’s more concerned about Wei Fen Qing’s competition. Wei Fen Qing tells Ah Wei Huo Ting En must be there in order for her competition to take place. For the sake of helping Wei Fen Qing realise her dreams, Ah Wei agrees.

While Ah Wei makes his long trip back with only the umbrella Huo Ting En had given him, Huo Ting En and Wei Fen Qing returns to La Mure on Ah Wei’s motorbike and the gear he had on him.

Huo Ting En walks off frustrated after hearing Wei Fen Qing’s disappointing answer, ‘Yes. If you force me to choose’ to his question of whether it was that she’d rather choose to give up the opportunity to work at La Mure and stay at the night market to be with her night market family.

It was a long night of waiting for Huo Ting En. He wished to receive a call or message from Wei Fen Qing to hear her say she will return to La Mure. However, he only received a message that told him she wasn’t coming into work the next day because she was going to take care of some other matter he couldn’t see as more important than the current matter of returning to La Mure.

The next day, Huo Ting En finds out the matter she was taking care of is the one he was concerned about. Wei Fen Qing packs up her night market stall and closes business for good. She wishes to create dishes that can be called her own and not one that sold through using another’s reputation.

The episode closes with the wine party. It’s a wine party VIP, President Wang, has thrown for his guests to celebrate his birthday. Huo Ting En and Wei Fen Qing attend. Peng Xiao Bin is in attendance and so is Huo Tian Zhi. Yang Yu Qing (Li Xing) is introduced. She is Huo Tian Zhi’s girlfriend, fiancée and assistant.

Huo Ting En takes the time to teach Wei Fen Qing a bit about wine and food by having her try the foods on the table and getting her to see what foods go well with the glass of white wine she has in her hand.

She tries a cream tart and comes to offend President Wang when she comments it has a weird taste to it. It offends President Wang because the food he provided for his guests at this wine party are all fresh and of high quality. However, Huo Ting En confirms there is an odd taste to it, explaining that the high quality cream is delicate in nature and due to some unfortunate event during either its making or when it was being transported here, its taste altered in a way that made it not taste like the high quality product that it is.

Wei Fen Qing’s incredible sense of taste impresses President Wang and his guests. Yang Yu Qing makes a suggestion to have Wei Fen Qing show more of her abilities. She seems very curious to know the level of skill Wei Fen Qing has in cooking when she wishes her to cook a simple dish to replace the one she had commented as tasting odd.

It’s a suggestion Wei Fen Wing isn’t able to refuse and get out of. It becomes like a test that tests her knowledge of wine when the dish must also be accompanied by President Wang’s white wine. At first, Wei Fen Qing struggles to come up with a dish that could accompany the wine. But then, she remembers the previous night when she was eating some salty snacks and she felt particularly refreshed after drinking a beverage that Ah Wei had brought over. The beverage has similarities to the white wine.

The dish that Wei Fen Qing presents to President Wang and his guests is a version of Taiwanese Salty Fried Chicken. Wei Feng Qing explain she had chosen to make the dish due to the refreshing tropical sweetness and sourness of his white wine. President Wang tries it with his white wine. He’s taken by the taste: “What is this taste?!” he says.