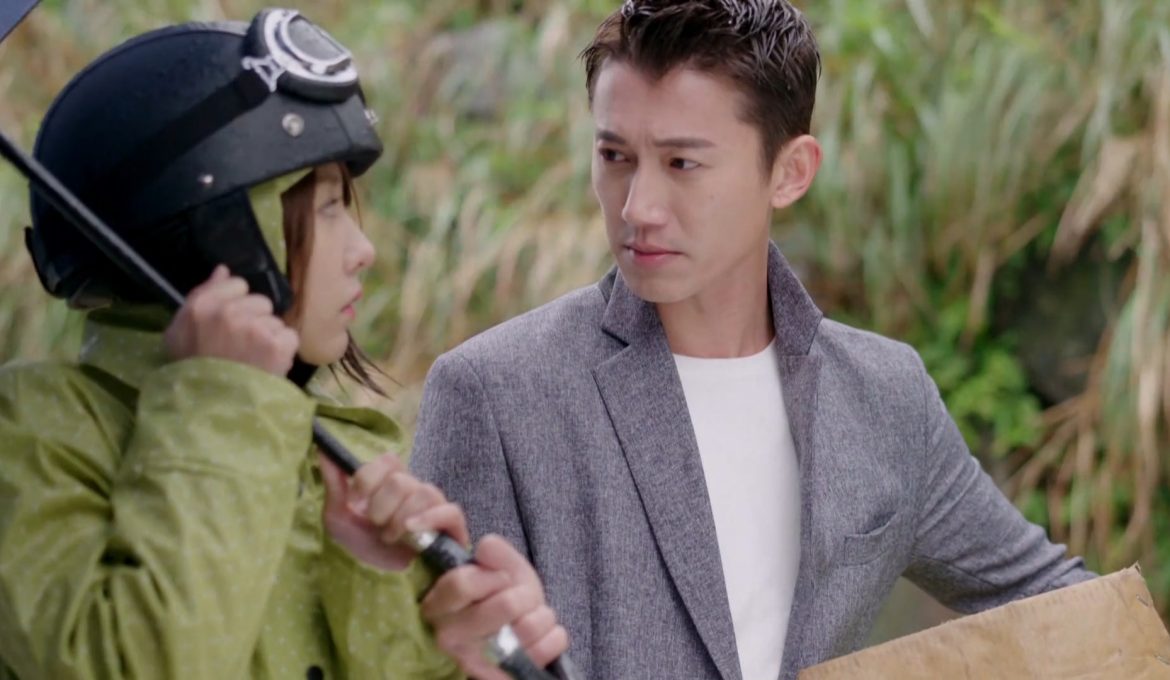 So much going on in this episode!

We learned that Wei Fen Qing is scared of the dark because the light turned off after hearing her father had passed away.

President Meng will have Huo Ting En become a son-in-law and Meng Ru Xi is happy about this.

Huo Tian Zhi supports this. In this episode, we saw Huo Tian Zhi send flowers and a card to Meng Ru Xi in Huo Ting En’s name. Huo Ting En isn’t interested, though. Meng Ru Xi is looking like someone Huo Ting En has to be nice and polite to. She is very important in his line of work, after all. Her word is very powerful with her being an influential food critic. Huo Ting En doesn’t seem to like owing favours to Meng Ru Xi, either. This episode had him owe another one to her and he complains about it aloud to himself. Aw. :o( :o(.

We feel Ah Wei isn’t appearing enough and not standing out enough. He’s a main character who’s very much in the background. Peng Xiao Bin is a supporting character, but he’s appearing a lot more and stands out much more than Ah Wei at the moment. We’re quite underwhelmed with the Ah Wei character.

The night market side of the story makes an appearance. They have a situation with their gas supplier being taken by a loan shark and Huo Ting En helps free him. Great action this part was. It was exciting action watching Huo Ting En go faster and faster as he stabs a table knife in the spaces of his fingers as a bet to free the gas supplier!

The main focus of this episode continues to be the continuing situation of Huo Ting En teaching Wei Fen Qing how to make his Curry Lobster. Amongst this is Huo Ting En getting more intrigued by Wei Fen Qing! :oD :oD.

Episode 3 was another good episode. There were some relatively serious moments, but there were lots of funny moments. We’re actually amazed how situations transition from serious to funny so seamlessly! There’s the opening scene and also the one where Wei Fen Qing gets angry because Huo Ting En was about to throw her father’s notebook. The scene that followed Wei Fen Qing getting angry at Huo Ting En was Wei Fen Qing laughing at Huo Ting En’s pant-less right leg and boxers showing! It’s nice that the series is keeping this light and positive.

Huo Ting En apologises to Wei Fen Qing for turning off the lights. He’d only wanted to play a bit of a joke on her. These words (and possibly also the place having brightened up after Peng Xiao Bin turned it back on) brings Wei Fen Qing out of her fear. She’s not impressed with Huo Ting En’s joke and deals him a solid elbow to his chest.

Huo Ting En gets dealt another painful attack when his hand unintentionally lands on Wei Fen Qing’s chest after she saves him from falling to the ground. She flips and throws Huo Ting En to the ground for his indecent touch.

This was a result of a collision that occurs from Wei Fen Qing storming into the dining area and Huo Ting En making his way into the kitchen. Wei Fen Qing was not happy to have found their work agreement contract lying on the kitchen countertop and thought it was Huo Ting En’s way of letting everyone know she was afraid of the dark. She had misunderstood, though—as Huo Ting En clarified after being flipped and so harshly tossed to the ground. He’d left it there so she could see that he has signed the contract and is agreeing to teach her how to make his curry lobster.

The evening’s events play on Huo Ting En’s mind later in the night when he’s about to go to bed. He’s beating himself up for thinking about the close contact from the collision and the hand on Wei Fen Qing’s chest. Wei Fen Qing also seems to have been affected by the evening’s events as well when she dreams of the night she had been informed of her father having passed away after being in a car accident. This dream showed a young Wei Fen Qing snapping to hug the furniture below in fear and crying following the lights turning out after Wei Fen Qing took over the call that her mother took. With her mother having left for the hospital with a young boy (little brother, maybe??) right after hearing the news, Wei Feng Qing was alone at home at the time.

Wei Fen Qing fortunately doesn’t catch onto the less-than-decent thought that is going through Huo Ting En’s mind. She only wonders why Huo Ting En has placed the lobster he’d been holding so close in front of her face after he shook the thought off and turned his head the other way to cool off.

Back to La Mure, Huo Ting En sets out a test in flambé making for Wei Fen Qing and the staff. Wei Fen Qing must do well in order to have the chance of obtaining a special training session. But she fails this test on a lack of knowledge on wines. Wei Fen Qing is asked to make another. She does. Before she does, she studies and makes notes on wine in her father’s notebook which she noticed lacked information on them.

Huo Ting En spots Wei Fen Qing with her father’s notebook and he’s not happy about it. After the brief meeting he has with Meng Ru Xi who had come to La Mure to let Huo Ting En she loved the flowers and card she received from him (but was actually the doing of Huo Tian Zhi), Huo Ting En goes to Wei Fen Qing. He confused why she’s learning through her father’s notebook instead of learning through the environment and the ingredients he provided her.

Though Huo Ting En realises he has been in a better situation than some, he expresses that it hadn’t felt like that. Sitting at a desk and looking at a picture of his family#8212;one showing a family unit that is different from the picture-perfect family, Huo Ting En expresses how it has been difficult for the last ten years. He hasn’t been the least bit happy.

The episode closes with a situation of La Mure’s supplies of Reishi eggs found broken in the storeroom. Without them, the crew are unable to make egg tarts for their evening service. Wei Fen Qing is accused of breaking them as she was the one who went into the storeroom. With Meng Ru Xi’s help in the background, Huo Ting En successfully obtains supplies of these special types of eggs from a supplier in the mountains.

However, Huo Ting En has difficulty returning to La Mure with them. Huo Ting En’s car doesn’t start after a reckless motorcyclist crossed his path and caused him to crash into a rocky face to avoid the motorcyclist. It’s also raining and very windy.

Wei Fen Qing had also gone up to the mountains to obtain supplies of the Reishi eggs. Huo Ting En meets up with her on the road when he went to make his way back on foot with the box of Reishi eggs in arm. Wei Fen Qing isn’t able to provide them both transport though. She crashes her motorbike to the side of the road when Huo Ting En went to stand in front of her path, calling her to stop and she veers off the road to avoid crashing into him.