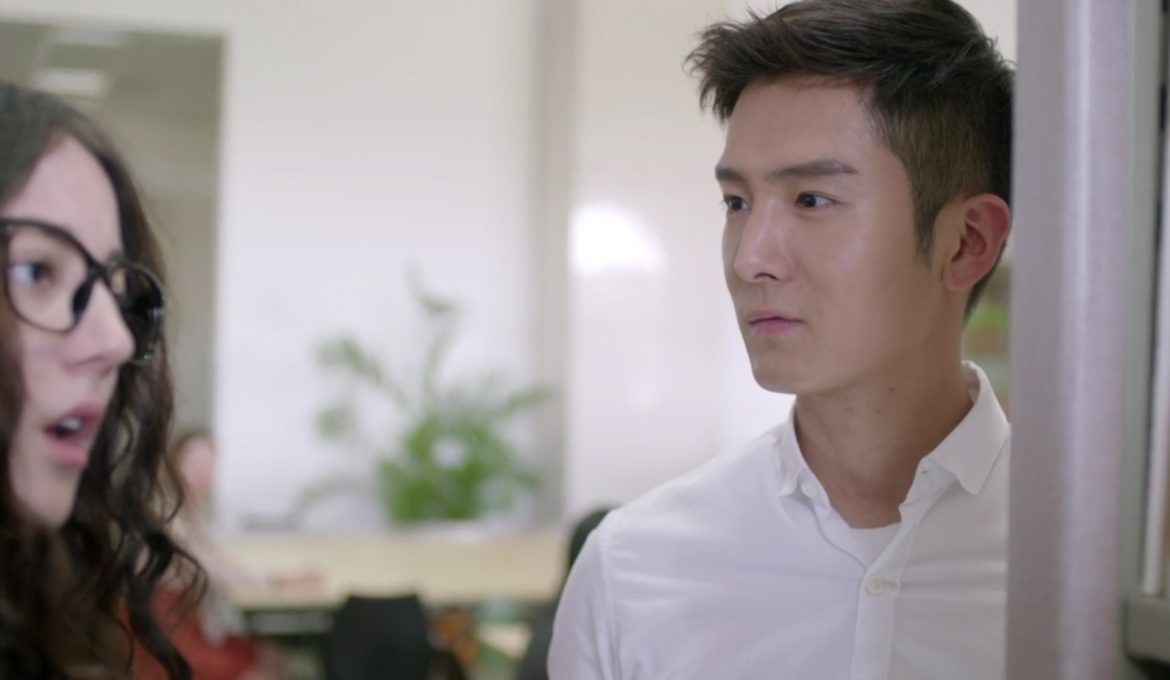 We last said that we weren’t sure how we’ll go with Pretty Li Hui Zhen, but we’ll probably finish it. We’ll change that to very likely we’ll have no trouble at all finishing it, because after having watched nine episodes, we’re finding Pretty Li Hui Zhen pretty great. We were worried that the character personalities changed a bit too much, that the main character relationships were a little different and the toned-down, different style of humour might make the drama not as great to watch; but, not the case. There’s less of a gap between the Korean original and Pretty Li Hui Zhen. Character personalities and relationships are more like the ones in the Korean version. The humour, though toned down, is as great. Story-wise, it’s following very closely to the Korean original, which we have no complaints!

And so, onto the story so far…

Li Hui Zhen’s plan to get Xia Qiao to pretend to be her and cut ties with Bai Hao Yu by telling him she’s leaving to Denmark to study doesn’t go as planned. Days after sending photos of her in Denmark, Bai Hao Yu spots Xiao Qiao at the airport and she is left to explain how she did end up going to Denmark and was in Denmark until not long after she ran into him. Finding the story difficult to continue, she just tells him straight that she is a liar and that the reason she told him such a story about Denmark is she felt embarrassed to tell him about her being a hotel worker, especially after seeing how successful and handsome he’s become.

As Bai Hao Yu runs after the fake Li Hui Zhen, feeling offended Xia Qiao doesn’t see him the way he sees her, he makes it known how unimpressed he is of the real Li Hui Zhen. He scolds her for not being prepared in team meetings, for presenting minutes from Immortal team meetings that aren’t up to standard, for not being hardworking enough and wasting time because of her incompetencies. What he doesn’t know is that she takes on quite a bit of other people’s workload and works lates, past when everyone (except her team leader who she sometimes helps) has left the office.

Another unfair scolding is a mistake she makes with sending him to the wrong airport, causing them to almost miss a meeting with a very hard to get guest from overseas. Bai Hao Yu has this habit of not listening whilst he’s busy reading. This is why he often bumps his head into doors and drinks from decorative glasses containing flowers. Because of this trait of his, he failed to tell her it was the wrong airport.

After he unfairly scolds Li Hui Zhen for going to the wrong airport, Li Hui Zhen tells him like it is. She tells him that he’s the one who’s wrong since she asked him three times what airport, but not once did he correct her. She doesn’t spit out that it’s because of his tendency to block out everyone and all his surroundings when he has his eyes on his tablet, but she does point out he has this rude way of speaking to people and if he had spoken to her properly, she wouldn’t have driven to the wrong airport.

It takes him a day to see it, but he realises that she was right. The waiter who served him coffee both times even told him: when he’s reading, he doesn’t hear people talk.

So, the drinking from a flower glass finally comes in. Not as funny as in the Korean version, but it’s good to see not every funny scene was cut out. We wouldn’t imagine this particular scene would be cut out since, it is so important to show how zoned-out Bai Hao Yu can be, but we still have a feeling other less relevant comedic scenes will be cut out judging by the more toned-down humour this drama is going after.

But, geez, how can Bai Hao Yu not know he’s drinking from a flower glass? Doesn’t he feel that rose against his face? Coffee shouldn’t be like this. XoD XoD.

Episode 9 shows development between Bai Hao Yu and Li Hui Zhen. Bai Hao Yu smiles! And it’s all because of Li Hui Zhen. This happens in the library where both Li Hui Zhen and Bai Hao Yu are. Li Hui Zhen is there studying up on fashion. After being told she was incompetent by Hao Yu, she’s been working hard to improve. Bai Hao Yu is the reading his tablet. After getting up to head off somewhere, Bai Hao Yu, in his usual zoned-out fashion, ends up making his way towards a bookshelf. Li Hui Zhen, who’s been watching him the whole time, gets up and rushes up from her seat to save Bai Hao Yu. She then she goes on to rambling about how she was looking out for the bookshelf and not him. She tells him that had she not looked out for the bookshelf, he would have broken the bookshelf and then what would become of people who rely on the books which the bookshelf holds? They wouldn’t be able to learn. This seem to amuse him as he lets out a smile.

The scolding from Li Hui Zhen seems to open him up to a trait of Li Hui Zhen to ramble on. He seems to like that she tried to hide her care behind that ramble of hers. We really like this scene. We just wish that Bai Hao Yu displayed a subtler smile, though. The smile was wide and it was held for quite a long time. It sort of stuck out too much. Just the day before he was scolding her for the airport mistake. Before that, he’s been criticising her work. There was just a hardly noticeble scene where he was actually happy with Li Hui Zhen’s efforts with preparing some documents and an idea she casually offered, but it was the usual straight, unimpressed expression from him. There was just a bit too much contrast between scenes for such a smile.

We love this part of the story. Nothing non-work-related can pull him out of his world when he’s busy reading his tablet, but the moment it’s anything to do with Li Hui Zhen, he’s brought out immediately.

Li Hui Zhen appears to come before work. He’s often seen on the phone with his friend. (We’re not sure if he is his friend or someone else. If he’s the same character as the one in the Korean version, it should be his psychiatrist, but we’ll refer to him as his friend). In his calls to his friend, he’s either talking about work or Li Hui Zhen. When he has to talk about the both, he would talk about Li Hui Zhen first. His friend seems to suggest that work is usually Number 1 in his books, but ever since he’s found Li Hui Zhen (or who he thinks is Li Hui Zhen), Bai Hao Yu’s put Li Hui Zhen matters first.

The issue leads to Xia Qiao facing the fact that she isn’t Li Hui Zhen. During this whole time, Bai Hao Yu is there for her to make her feel better. He saves her from being taken advantage of by a man at a bar after she went ther to have a drink. He wrapped her wounded hand after she threw a wine bottle at that said man at the bar. Then he took her to a playground to cheer her up. But in every occasion he was with her, he mentioned shared memories he thinks he has with her. She was made to reminisce about the old times. None of which she could take part in since she wasn’t Li Hui Zhen.

She’s starting to like him, but he’s not hers. he’s Li Hui Zhen’s. Yup, it’s the start of a love triangle!!

Lin Yi Mu is revealed is not just an editor at Immortal. It’s not revealed who he is, but he’s apparently rich. His place of residence is at the presidential suite at the hotel Xia Qiao works. There, he’s known as the guest 8646, which refers to the suite he is staying in.

And there you have it, the main developments for Episodes 5 – 9.

Li Hui Zhen turned out to be a nice version of Kim Hye Jin. She doesn’t have that geeky, subordinate-like aura that was felt in the first for episodes. Since then, she’s developed to be someone who’s bold and won’t take crap from anyone when she knows she’s not the one in the wrong. She speaks her mind, too. There was a scene where she got so fed up with Bai Hao Yu’s attitude she lets it all out, calling him a three-year-old brat before imitating him and calling him strange for forcing people to present all their ideas in three seconds—a command he accompanies with an hour glass. Then she makes fun of how his mouth doesn’t even move when he says all of this. Hahaha. Love!

Li Hui Zhen is Charlie Chaplin. We didn’t know why Li Yi Mu called Li Hui Zhen Charlie initially. In the Korean version, Kim Hye Jin was nicknamed Jackson (as in Michael Jackson) for her white socks and Dr. Martin shoes (we think that’s what they were); but, Charlie for Li Hui Zhen? We must have glazed past the scene where Li Yi Mu made the initial reference, but it seems it’s in reference to the famous Charlie Chaplin! What an interesting choice! We like it.

What we also like is the Charlie Chaplin-style dance Li Hui Zhen does in the office, an additional scene to the Chinese version. It has Li Hui Zhen take out a glittery blue hat and scarf and start dancing during a lunch break which had everyone out of the office dance. This scene was pretty random and doesn’t add to the story much, but it make Li Hui Zhen come off quite odd but oh-so-intriguing. Hopefully Bai Hao Yu thinks so, too, when he walked in on her in middle of the dance, and it kicked of his own intrigue in Li Hui Zhen somewhere deep down. :oP :oP.

Xia Qiao doesn’t come off as someone who looks down on Li Hui Zhen anymore. They come off as more equal now and we can now see how these two can be best friends. Xia Qiao is pretty, but she’s quite quirky. She talks quite loudly at times, her face contorts into funny expressions, she floats around like a buzzy bee using her humidifier like a buzzy bee. It’s like she has a tiny bit of Kim Hye Jin’s personality. She’s quite cute sometimes.

Bai Hao Yu, we’re getting used to him. At times he still can be hard to watch as his expressions are quite flat. Maybe that’s the whole point. Li Hui Zhen did say he scolds without his mouth moving. Maybe expressions are supposed to be subtle.

So, nine episodes in, we’re really looking forward to seeing more episodes. Pretty Li Hui Zhen is good. It probably still has something to do with the fact we know what’s to come and are just patiently waiting for the story to get there, but the Chinese version is doing a nice job following closely to the original (it’s the kind of remake we like) all the while adding a dash of their own styling to characters and using a different kind of humour to the drama that is toned-down but still does its job in the comedy department.