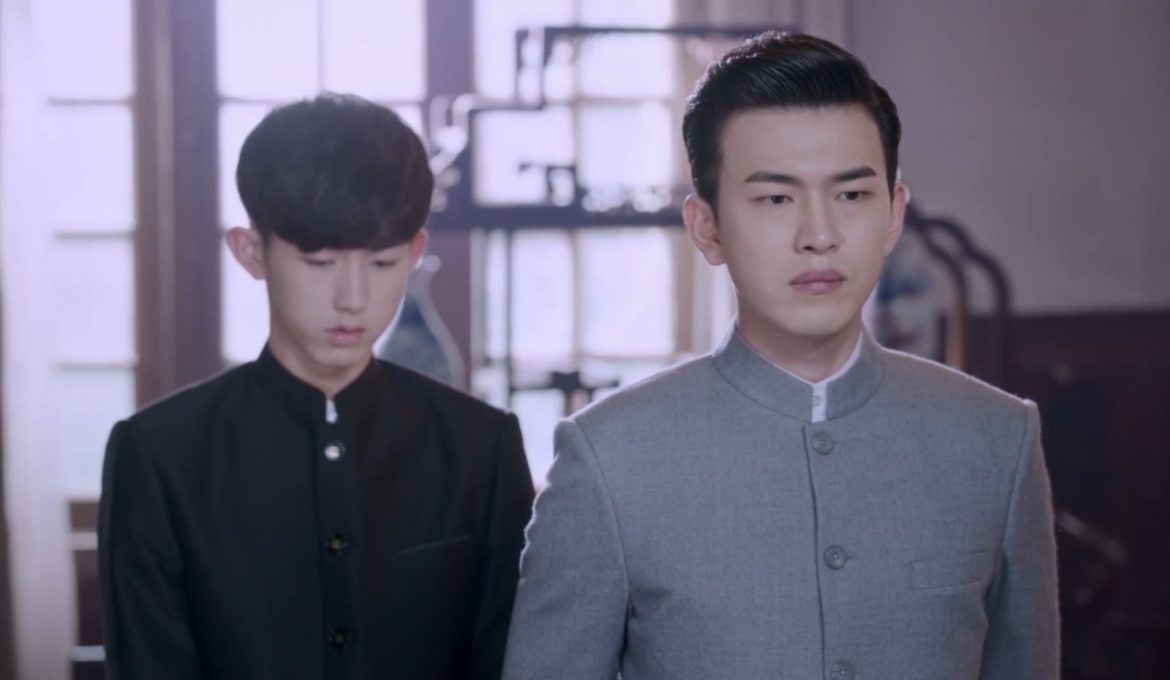 Episode 19 spent concluding the situation of Song Bai and Xin Song Bai as well as building more on the love triangle between Chang An, Qi Bai Cao and Fang Ting Hao. As we enjoyed the fight scenes of the final round of the Singapore Yuan Wu Dao competition and the continuing development for Chang An and Qi Bai Cao which is subtle, but good, this episode went by pretty fast for us and we enjoyed it a lot.

Xin Song Bai was strong throughout the final round of the Singapore Yuan Wu Dao competition. They had each Song Bai team member battered and struggling to keep up and fighting, but the result is Song Bai taking the win. The win was first through taking Xin Song Bai’s female fighter out. This gave Song Bai an advantage of three against two.

However, Ye Chong does get defeated. An attempt to help Qi Bai Cao out, Fan Xiao Ying tried to attack Ye Chong from behind as he focused his attacks on Qi Bai Cao. The attack failed. However, the continuing motion forward of her failed attack helped make Ye Chong go off-balance and it caused him to unknowingly walk out of the fighting area and allowed Song Bai to take the win.

So, Song Bai gains back their hall with the win. Later on, the rivalry of the two sides of Song Bai gets resolved after Fang Ting Hao takes a visit to Song Bai Hall in search of more answers to hopefully answer the questions the Song Bai gang had about why Song Bai’s old hall master had chosen to give Song Bai to Lu Fei Yu’s side. Fang Ting Hao succeeds in finding a missing portion of the will. What was written was a desire for both Song Bai halls to be one Song Bai and continue the spirit of Song Bai, ending the rivalry between the two sides of Song Bai.

Qi Bai Cao became uncomfortable around Chang An when he went to her in her hotel room to apply medicine on her for the bruises she sustained in the fight.

Qi Bai Cao was initially fine when Chang An sat down next to her on the bed to help apply medicine. But when the TV in the room showed scenes of the moment of their kiss in the couples event, it brought Qi Bai Cao to remember the confession Chang An made to her and she went to do it herself.

Fang Ting Hao caught this rejection of help outside. He was pleased by it and was convinced Chang An isn’t Qi Bai Cao’s choice. He smugly apologised to Chang An for misunderstanding the closeness he thought was there between him and Qi Bai Cao. He’s also no longer bothered or angry over the kiss between Chang An and Qi Bai Cao that he saw on display monitors in the hotel when he expressed how he now realises it was nothing more than one for the event to pay for accommodation and expenses. Fang Ting Hao further concludes the kiss to be simply etiquette just like how such a kiss can be outside of China.

Chang An seemed to have disliked Fang Ting Hao’s deduction and calmness about the matter. He told Fang Ting Hao the kiss he gave wasn’t etiquette. He left after that. No retaliation came from Fang Ting Hao.

But we can’t really tell what’s going on in Qi Bai Cao’s head. Every time she sees that kiss she had shared with Chang An, it looks to be embarrassment or more likely she’s beating herself over having allowed the kiss to happen instead of maybe rejecting it. Also, in this episode, she was shown to love the gift Chang An gave to her that she displays in her room. She spent time looking at it with a smile. Then, there was a frown. It’s seemingly because Chang An’s figure was missing. We can’t tell if that’s a good thing or a bad thing when we don’t know if she’s frowning because Chang An’s not there along with the others or she’s troubled by what to do about Chang An’s confession.

But at least she’s troubled by Chang An and the confession instead of rejecting straight away. She seems to be unable to stare Chang An in the eye now. Back at Song Bai after the competition, in her training with Chang An, she gets told off by him for not doing so. He told her she must look at her opponent in order to anticipate their move and know their thoughts to block them.

This brings in a nice scene where Chang An saves Qi Bai Cao from falling to the ground after his kick makes Qi Bai Cao lose balance.

The result of the save is another time-stopping moment for the two when they lock eyes with each other. This makes us believe Qi Bai Cao may possibly like Chang An, but she doesn’t know it herself yet. The time they remained in that position was already quite long, but we wonder how long it would have gone on for had Fang Ting Hao not come in and interrupted them. Yup. Fang Ting Hao does interrupt the moment and he was understandably not impressed when, back in Singapore, she had told him Chang An was just her instructor.

Not only that, Qi Bai Cao had tried to terminate her agreement with him to be his 3-month-girlfriend during that talk in Singapore. But of course, Fang Ting Hao was again persistent and asked that Qi Bai Cao give him the full three months to move her heart that he found to be like ice.

So, Fang Ting Hao returns to seeing Chang An being a threat when they return back to Song Bai where that heart of Qi Bai Cao’s that he had described as ice is melting before Chang An. Oh, it’s so sad for Fang Ting Hao. But we have to say Fang Ting Hao does come off a bit too strong. When we saw him put a hand over Qi Bai Cao’s mouth because he wanted to stop her from trying to terminate their agreement, the action took us back.

We haven’t been appreciating the pairing as much as we’re thinking we should. These two do look cute together. We do like Lu Fei Yu as well. He’s a cute character. So, it’s a shame that Lu Fei Yu is out of luck in getting Fan Xiao Ying.