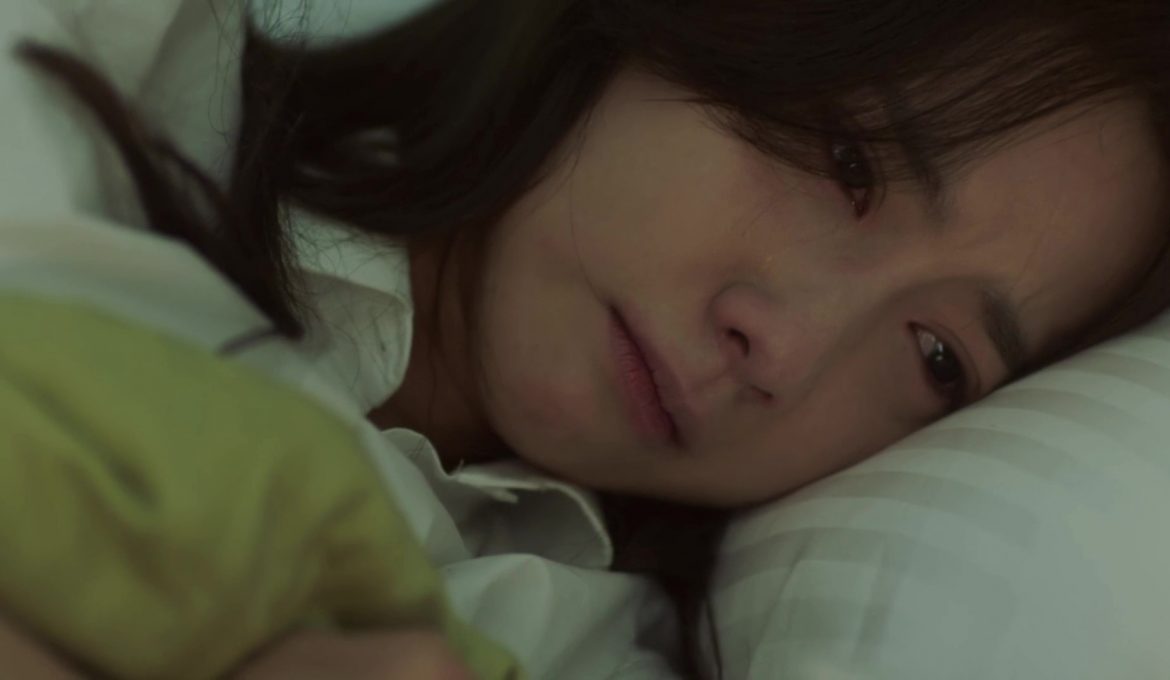 Kim Je Ha is uncharacteristically anxious when he gets Ko Anna to JSS Headquarters to be treated. To think that because of his lie about her dad having sent strawberry ice cream to her, she could have died.

As the medical chief works away at stabilizing her condition, Kim Je Ha hovers around Ko Anna, unable to turn his eyes away from her the whole time. He only leaves the room after the medical chief tells him he was being in the way.

Kim Je Ha makes his way to Chief Joo, angry about his call to cancel the ambulance. The person who actually made the call isn’t Chief Joo, though, it was the President. Chief Joo has him see that in this world, it’s better to leave her to die than have her existence exposed. Ko Anna seems to have even come to this conclusion: her reason for eating the strawberries was her attempt to commit suicide because, as she expressed to Kim Je Ha before falling unconscious, she realised she was the bad person in this whole situation. She was the hindrance in her dad’s life. And so, if he wants to keep her from dying then all he can do for her is protect her with all his might.

Kim Je Ha catches up with Song Young Choon after visiting Chief Joo. He is worried for Ko Anna as well and seems to know a little about the complicated relationship between Choi Yoo Jin, Jang Se Joon and Ko Anna. Up until this point, Ko Anna has only ever been addressed by her first name. Song Young Choon makes her last name known and reveals that the name belongs to a man from America called Ko Am Wook. Ume Hye Rin married him after she became pregnant with Ko Anna. He affirms Ko Anna is Jang Se Joon’s biological daughter and only Ko Am Wook’s daughter legally.

Song Young Choon tells Kim Je Ha that Ume Hye Jin turned up before Jang Se Joon with Ko Anna in her arms, after which they pretended to be a happy family behind Choi Yoo Jin, who he was already married to.

Ko Anna recalls more about the night she found her mother unconscious on the floor. As she lay asleep in the hospital room, she remembers the attacker that was in the room and he was out to kill her. With his identity continuing to elude her, she continues to believe he must be related to Choi Yoo Jin.

Upon waking up, Choi Yoo Jin feeds Ko Anna a different story, putting the cause of her mother’s death back down to her and her mother’s alcoholism. She tells Ko Anna that her alcoholic mother made it so easy for a young child to give her mother sleeping pills, and so it wasn’t her that killed her mother, but Ko Anna. That attacker which Ko Anna brings up as having recalled being there to kill not only her mother, but also her is answered with telling Ko Anna that her memory was lying to her.

Choi Yoo Jin also tells her that the dad she thinks is controlled by her actually doesn’t want to see her. His ambitions of wanting to be re-elected will have him remain this way. Choi Yoo Jin uses this ambition and greed of her dad to bring in yet another attack on her mother, saying that she may be a good mother to her, but to Jang Se Joon, she was blackmailing him using Ko Anna.

Kim Je Ha, who stood outside this entire time, steps in to stop Choi Yoo Jin from causing Ko Anna anymore distress. Choi Yoo Jin pulls the brakes and listens. (She must be remembering that Kim Je Ha still has that email he could send out to the world at a touch of a mouse. Probably helps that he’s part of Choi Yoo Jin’s inner circle.) Choi Yoo Jin gone, Kim Je Ha tells Ko Anna not to cry before telling her he will bring her dad to her.

Kim Je Ha heads off to Jang Se Joon’s assembly to see that he comes with him to see Ko Anna. Before that happens, a staged demonstration plays out in the assembly. It comes after receiving news that Choi Yoo Jin successfully persuaded an unnamed politician (we think he’s a politician) to allow Jang Se Joon to join his party.

How this staged demonstration helps Jang Se Joon is still developing, but after the fake distain towards Jang Se Joon, he manages to drum up yet another occasion where people are cheering and chanting his name by the end of it all. He does so by having the demonstrators appear angry over his disillusioned views (whatever they are—maybe the ability to challenge status quo) and having them pelt him with eggs which crack all over his face. This gives him the opportunity to appear sympathetic to their protests as well as announce a strict investigation of International Finance Group and promise to allow a full search and seizure of his home, office and election office to quash any suspected corruption.

Jang Se Joon returns to his dressing room where a real attack on him is attempted. It’s an attack on his credibility and image, much like the one in an earlier episode where a group of masked men stormed the company building to try film him with a woman after being drugged. In the dressing room, the woman who has been tending to Jang Se Joon attempts to drug him as well, but doesn’t get as far. The skilled bodyguard that Kim Je Ha is, arrives and stops her.

The police, which are said to be on Park Kwan Soo’s side, seemed to be in on the attack on Jang Se Joon, too. He and Kim Je Ha are chased down the hallway before Kim Je Ha (with some help from Chief Joo and the JSS men who blocks the police from giving further chase) manages to help Jang Se Joon escape them.

This has Jang Se Joon let in how one wrong word spoken could result in Choi Yoo Jin hiding Ko Anna away from his sights forever. He admits his greed had caused him to lose his morals and the people he loves. But he can’t stop now, because in order to escape the hold Choi Yoo Jin on him and his daughter, he must gain the ultimate amount of power. In order to gain this ultimate amount of power, he can’t see Ko Anna and risk saying the wrong thing and having Choi Yoo Jin catch on to his intentions.

Arriving by his daughter’s side, he lets out nothing to create any suspicions in Choi Yoo Jin who he knows is watching him and Ko Anna from Cloud Nine through the CCTV cameras installed in the room. He pretends to be an inattentive father who has no idea she had a strawberry allergy. He makes it so he comes off exactly how Choi Yoo Jin had painted him—someone who sees her and her mother as unimportant, burdensome fragments of his past. He tells her to forget about the matter about her mother being killed and makes sure she gets the picture that she and her mother are less important than the things he’s trying to do for the country.

That does it. That has Ko Anna believe the words Choi Yoo Jin said about her dad. She turns away from him, sobbing. Jang Se Joon’s display seem to have Choi Yoo Jin fooled as well. “To think I hinged my fate on scum like you,” Choi Yoo Jin is heard saying before we see her laugh and seemingly cry. Off to the side, Chief Kim is seen watching her, seemingly quite concern by the slight off-kilter nature of her laugh.

All the characters are flipping again. Choi Yoo Jin came off as a victim in the last couple episodes, but in this episode we are reminded of the things she does to ensure things go according to her way. She was generous in Episode 6 when she offered to allow access to information he really wanted to know. This episode, she’s going around saying hurtful things to Anna.

The introduction of Ko Am Wook feels like a hint to the mystery behind the attacker’s identity. Could it be that Ko Am Wook is the one who tried to kill Ume Hye Rin and Ko Anna? Maybe Choi Yoo Jin wasn’t behind it at all. But then, there’s still that mental instability she was said to have earlier in the episode. She seems to be a bit unstable again in this episode.

Jang Se Joon’s been quite despicable the last couple episodes and came off as someone who only cared about getting presidency. He still has the same goal, but he’s justifying it with how since he started, he can’t stop as that would ensure loss of Anna. It’s hard to tell what’s truth and what’s an act with him, though. Jang Se Joon is great at putting on a show.

We have a feeling he’s up to something with that declaration of allowing himself to be investigated and demanding International Finance Group to be investigated, too. It’s like he deliberately did this to ensure Choi Yoo Jin and his opponents are all exposed and he come see up on top.

Park Kwan Soo, minus ordering Raniya’s death, he hasn’t done anything else bad. He’s got the police on his side, he was seen sipping tea with a monk at the temple, is he actually the baddest of the bad? He was seen giving money away to district councillors, since, so he probably is quite corrupt, but he doesn’t come off any worst or better than Choi Yoo Jin and Jang Se Joon.

No one’s coming out as the winner when it comes to who’s the bad guy. Maybe the whole point is not to have a bad guy, but to make them all victims of their own situation.

Guess we’ll find out once Ko Anna is exposed to the world. The colours will probably show then. Looks like it won’t be long. A couple of girls was seen capturing a photo of Anna in Episode 6 (this scene was too obvious) and in this episode, her photo is going up online again.