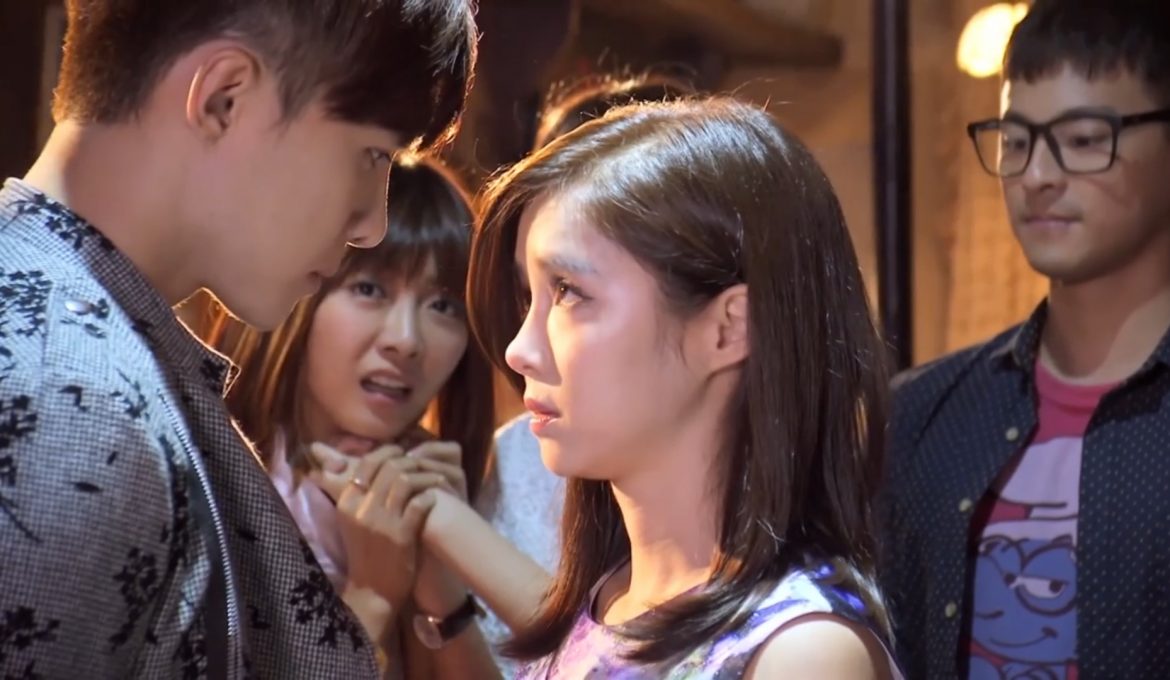 Last episode, Ji Jia Wei was upfront about He Zhi Yu having caused him to disappear. This episode, he’s up on stage singing to apologise Guan Xiao Tong again, recognising and expressing how he let her down in words.

As soon as Ji Jia Wei hears from Xiang Zi Yan‘s own mouth that he likes Guan Xiao Tong (as well as a criticism that Ji Jia Wei failed to protect her and that from now on he will protect her), Ji Jia Wei quickly takes action to make sure she knows how truly sorry he is about missing the radio appearance. He has his colleagues bring Guan Xiao Tong to a restaurant where he stands on stage to sing and express the things he wants to say to her through the song. He then apologises again for being late and having let her down and even wronged her for the scolding she suffered from the radio producer. He tells her that he wants her to promise him to get angry, but not to ignore him. Unbeknownst to him, the whole performance and his words were recorded and broadcast live to all the listeners of Love Zero Distance (the radio station he was supposed to have appeared on with Guan Xiao Tong), helping him complete the final part of the show which he failed to do previously.

Such scenes can be cheesy and cringy, but not this one. We really like it because it comes from a character who is so honest, upfront and genuinely sorry. Xiang Zi Yan really will not be much of a threat if Ji Jia Wei continues to react so perfectly. If we go by Jia Wei‘s latest words vowing he will not allow Xiang Zi Yan the opportunity to get in between him and Guan Xiao Tong, Xiang Zi Yan might just come in and then go right back out again. It’s hard to see Xiang Zi Yan getting a foot in when Ji Jia Wei is so honest, proactive and resolute.

We’ll have to see if Ji Jia Wei can remain resolute and unaffected, though, because He Zhi Yu who we thought was taking a back seat in the story is still very much in it with the introduction of a new arc involving the return of Ji Jia Wei‘s mother mid-way through Episode 14. Out of the blue, Ji Jia Wei‘s mother shows up at his apartment during his dinner with Guan Xiao Tong. Initially Ji Jia Wei is not pleased about the sudden return. It takes a visit to an orphanage with Guan Xiao Tong, her insight on the situation and meeting a little boy (who Ji Jia Wei comforts) for him to see the courage it took for his mother to see him after having left him when he was a boy. It’s after this realisation, he and Guan Xiao Tong looks for his mother to enjoy a day out together. Here, Ji Jia Wei learns that his mother only had the courage to return to him because of He Zhi Yu. He Zhi Yu found his mother whilst she was in America and it was her who made all this possible!

What we think could come from He Zhi Yu and the return of Ji Jia Wei‘s mother might not come about, like using it to hold Ji Jia Wei against his wants and getting in between him and Guan Xiao Tong. The writer(s) might use this to tell a different story and head in a direction different to the typical. But still, did they have to use this way to keep He Zhi Yu in the story and continue making Ji Jia Wei feel sorry for her and indebted? It’s probably the first time Murphy’s Law of Love used a cliche move in the story. We don’t hate it, but if they were going to keep He Zhi Yu in this way, it would have been better if it had somehow shown us that she had contact with Ji Jia Wei‘s mother and that this was coming. That way, we wouldn’t have gotten our hopes up for her exit and the release of Ji Jia Wei from the burdens he’s been feeling since her return.

Oh well. We’re not sure what we should be looking forward to or be excited about at this point, but we still have hope that the writer(s) will come up with something to wrap it up over the next six episodes. We shall wait to see what the next episode brings.

For the time being, lets enjoy the scene where Ji Jia Wei sings for Guan Xiao Tong! We found a clip of it on YouTube. The song is GJ’s (Jiang Zhou Jia), “Want to Say“. Danson Tang’s version is pretty awesome don’t you think? We’ve known about the actor since They Kiss Again (2007) and have seen a couple more dramas where he played supporting roles in Hanazakarino Kimitachihe (2006) and Summer X Summer (2007); we know that he’s a recording artist as well as a model and an actor; he’s also sang the end credits for The X-Family where he’s also a part of its main cast with Jiro Wang, Aaron Yan and Calvin Chen; still, we’ve never heard him sing until watching this scene. He’s got a really nice voice! Love!