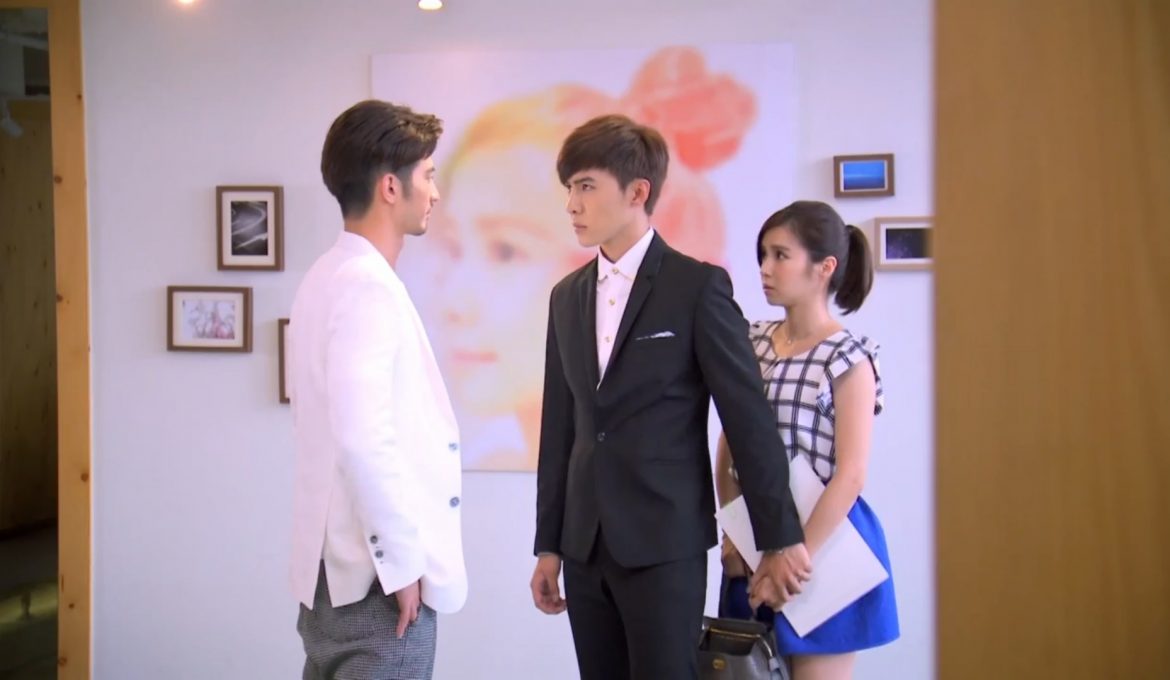 Although we’ve learnt not to predict how things will go on Murphy’s Law of Love (since the series often stops short or doesn’t actually go where we think it will go), it was still a worry that Ji Jia Wei‘s discovery of He Zhi Yu‘s car accident would bring about drama angst. We don’t mind a bit of drama angst, but not the long drawn out kind and not the kind where one of the lead characters is suddenly confused about their feelings and start to go back and forth between the old love and the present love. No need to worry about Ji Jia Wei doing that because he is honest about it all and remains committed to Guan Xiao Tong.

When he and Guan Xiao Tong finally catches up with each other outside Guan Xiao Tong‘s home the same night he stands her up, Ji Jia Wei immediately apologises to her before telling her honestly that he had completely forgotten about his promise to appear on the radio show with her because he found out about He Zhi Yu‘s car accident, and she was the reason for his disappearance. He, once again, is 100% straight and truthful with her. Love!

Guan Xiao Tong, she was very awesome, too. There she was, stood up, yelled at by the radio show producer because of it and then finds out that the reason behind it all was because of Ji Jia Wei‘s ex, anyone would feel down and insecure. Not Guan Xiao Tong, though. She was more worried about his distress after the revelation. She tries to comfort him and offers him words of encouragement despite having experienced a pretty disappointing evening herself.

The next day, Ji Jia Wei calls He Zhi Yu to meet together to talk and clear things up. He lets her know that he found out about her car accident, that he feels terrible for the misunderstandings he had since her return, and regrets he wasn’t there during her pain and sincerely wants to offer his help in her recovery because—in his words—anyone seeing her state would feel bad; but, it is the end for them and he wants her to tell herself this. (Ji Jia Wei was looking for a peaceful ‘divorce’, putting to practice the same process which his Renew Agency of Divorce uses for his clients it seems.) He Zhi Yu, feeling disappointed and seeing his offer of help as just a means to try make himself feel better about the situation, declines his help and tells him she would do this on her own, ending their relationship on a note no better than before.

With that, it looks like that might be it for He Zhi Yu‘s side of things. We’re not sure if He Zhi Yu will come back in later episodes and create a new set of problems for the main couple, but at this point, it looks like her part in getting in between the main couple is over with no drama angst developing from it. We really like how quickly this was taken care of by the writer(s).

Next up is Xiang Zi Yan‘s turn to take over and get in between Ji Jia Wei and Guan Xiao Tong. He comes out of the shadows in style in Episode 13. Xiang Zi Yan reveals himself to be Taiwan’s talented and renowned chef, and the chef behind the ReFOODLution event which aims to provide people (particularly children in remote areas who don’t receive a lot of love) an enjoyment of eating healthy but still delicious food during a press conference held at his restaurant. With Guan Xiao Tong amongst the press, he makes his first move towards expressing his feelings for her, giving her hints as he talks to the press about a girl being behind the inspiration for the project, needing to express his love for something (or someone) bravely as well as making a reference to a piece of artwork which features the girl who inspired him and is used in all the ReFOODLution promotional posters—a piece of artwork which he calls, “First” (as in “first love”). The message is received and Guan Xiao Tong soon connects that she is the girl in the artwork, the girl he once told her was a very, very important person to him.