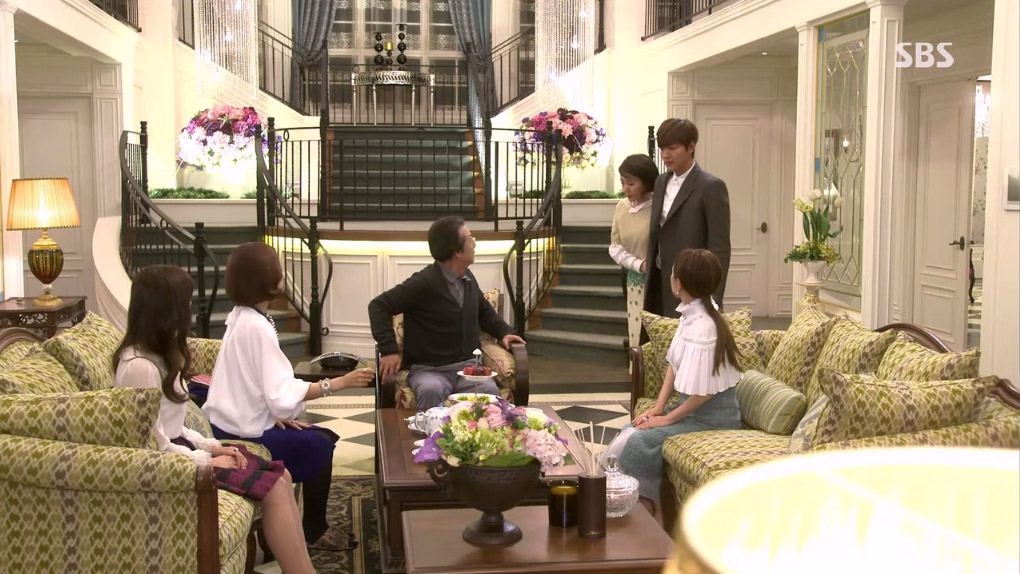 These two episodes focused a lot on the reality of the situation. If Cha Eun Sang continues with Kim Tan whilst he continues to proceed with the arranged marriage, the outcome would become exactly like the family arrangement Kim Tan‘s father has in place. Like history repeating itself, Kim Tan would be his father who has two women by his side: Yoo Rachel the wife, and Cha Eun Sang the mistress.

Cha Eun Sang is reminded of the reality of the situation again through a dunking in the swimming pool. Choi Young Do appears to be saving her from falling into the pool below, but then lets her go with a smirk. He tells her that Kim Tan may appear to be holding on to her, but eventually he will let go. Choi Young Do can be so thick-skinned: he likes her, but isn’t afraid to be mean and harsh to her.

Cha Eun Sang vows that she will take revenge on him for the incident, but she retracts it when she realises the hard time he is having with the situation involving his family and Yoo Rachel‘s family as well. His father’s marriage announcement to RS International‘s, Lee Esther, is the talk of the school. The announcement sees Yoo Rachel upset and Choi Young Do feeling embarrassed. Her concern for Choi Young Do‘s feelings (over seeing Yoo Rachel being comforted by Kim Tan) surprises him.

Choi Young Do continues to look into Cha Eun Sang‘s background—not to threaten Cha Eun Sang with the information he finds out—but to use it to threaten Kim Tan with. He tells him that if need be, to protect everything, he will reveal the information to everyone—that he is seeing Cha Eun Sang who is scholarship student and has a housekeeper as a mother. Kim Tan retorts that he may be an illegitimate son, but he is still the second son of Jeguk Group and has the backing of his father. It would seem three years ago, Choi Young Do missed the chance to have one last meal together with his mother because of the same fight he had going on with Kim Tan; and seemingly this fact was behind him losing his mother.

Cha Eun Sang is found out by Han Ki Ae that she has been seeing Kim Tan. After being caught in his room and scolded for daring to enter it, Cha Eun Sang decides she has gone as far as she can go with Kim Tan. She moves out of the house and rejects Kim Tan‘s plea to hold onto him.

The rejection results in Kim Tan and Cha Eun Sang being not on speaking terms, but he’s yet to give up on Cha Eun Sang and begins his plans to lean towards her. He requests Jeong Ji Suk to arrange a dinner between his family, Yoo Rachel and her mother at his family home. Jeong Ji Suk agrees: seeing this opportunity as another good way to let Han Ki Ae know her place in the family—a mistress, who will never be a part of the family tree. Jeong Ji Suk‘s plan to show Han Ki Ae her place fails when Kim Tan drags his mother out to the family room and reveals that, it is true he is the second son of Jeguk Group‘s Kim Nam Yoon, but he is not the son of Jeong Ji Suk but the son of Han Ki Ae.

We’re curious with what Choi Young Do‘s next moves are. Yoo Rachel and her family knows, but the school still doesn’t; so Choi Young Do still has some leverage against Kim Tan.

Kim Won was revealed to not have as low of an opinion of Kim Tan as he was seen to have. Jeon Hyun Joo, the girl Kim Won has been seeing, reveals that Kim Won has made comments about how loving and honest Kim Tan is, how tall he’s grown and that he has the same eyes as he does. Kim Won sounds almost proud of Kim Tan. He also isn’t impressed with the way his father is dealing with Jeon Hyun Joo. Maybe Kim Won will start seeing Kim Tan‘s efforts to change and clear the mess. The fact that Kim Tan revealed his true family background and risked everything, maybe Kim Won will see that Kim Tan is truthful about not wanting to take the President position at Jeguk Group that he has tried so hard to prevent Kim Tan from obtaining? Perhaps these two brothers can band together and create a situation where they both get what they desire since their wants don’t actually conflict with each other.