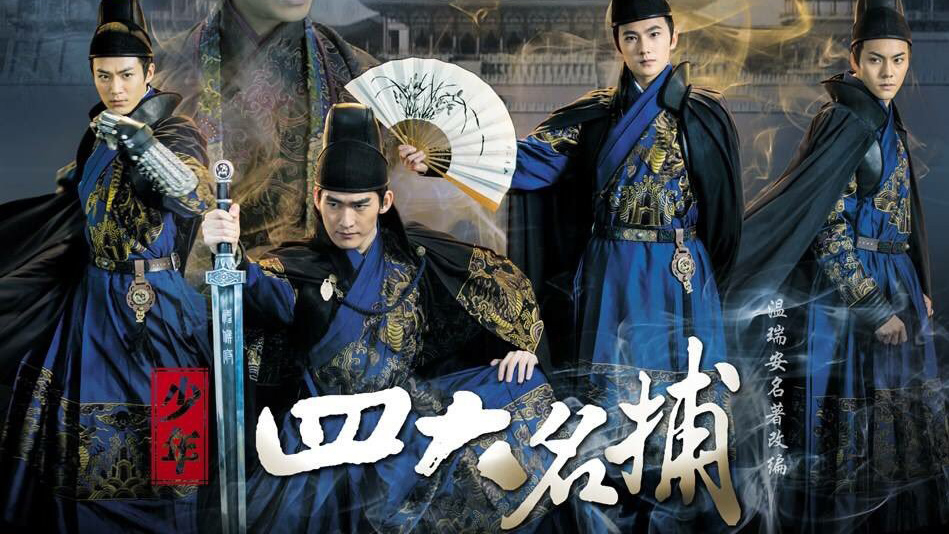 The Four / 少年四大名捕 is a Mainland Chinese Wuxia-detective series based on the Si Da Ming Bu novels by Woon Swee Oan (also known as Wen Rui’an), a Hong Kong-based Malaysian-Chinese poet and writer. We came into this series especially for Chinese actor Zhang Han (Shan Shan Comes to Eat) and Taiwanese actress Janine Chang (You Light Up My Star), but ended up genuinely engrossed in the story, watching episode after episode.

The series tells a story of the Devine Deputy Bureau‘s The Four Infamous Deputies—Cold Blood (Zhang Han), Heartless (Yang Yang), Chaser (William Chan) and Iron Fist (Mao Zi Jun)—and their head, Zhuge Zhen Wo (Howie Huang), who all work for the Emperor to protect the Capital City of the Ming Dynasty from the terrors created by The Four Great Villains, evil-doers and sects who seek revenge or power.

The drama begins with a threat from The Four Great Villains who were captured and supposedly imprisoned and sealed off from the world forever, but their great magic allowed them to escape. Now free, they set out to battle The Four Infamous Deputies to create a distraction for a power who can mass-kill in a short time, leaving only a wound on the victim’s neck that quickly heals.

Meanwhile at the Chu Mansion, Chu Ying Xue (Janine Chang), is chosen by the Emperor to enter his palace as one of his ladies-in-waiting. Against her will, she is drugged to set off towards the palace by her stepmother. When Chu Ying Xue (as well as the other ladies-in-waiting) manages to escape from the watch of the escorting soldiers, The Four Infamous Deputies are put on the case. She is found and captured by Cold Blood who has no intention of letting her escape despite her attempts. Fortunately for her, she is spared after the other deputies sympathises with her and convinces Cold Blood to let her take refuge at their Devine Deputy Bureau and serve as a maid under a new identity of Chu Li Mo.

Chu Li Mo is soon discovered to have mind-reading abilities, a skill that is key to saving Cold Blood (who has desires of revenge against those who murdered his parents and everyone in his Wolf Tribe) and curing the wolf poison which threatens to take control of him, turn him into a wolf and threaten the lives of everyone around him.

The story continues with a series of crimes/cases which The Four Infamous Deputies must solve, most of them linking to An Shi Geng (Mickey He), the Royal Lord who seeks revenge on the Emperor for taking the life of his beloved Butterfly Dance (Li Yi Xuan) and overthrow him.

For people not used to watching the fantastical, superhuman strength and abilities that defy the laws of physics in Wuxia dramas, the series can be a turn-off and a reason to stop watching. The bright red blood that look like red paint, the characteristic stream of blood that always drip down from the corner of defeated opponents, the obvious use of flying rigs against a green-screen as well as heavy use of poisons (some of them quite conveniently thought up) to intensify the story might cause a few eye-rolls, too. But don’t let the style stop you from watching and chasing down The Four because peel off the fantastical part of The Four and you’re left with a very addictive period-action-melodrama with nice romance arcs filtering through.

With us, we used to enjoy quite a few Wuxia dramas in the past, but it’s been quite a long time between Wuxia dramas. It didn’t take a lot to adjust to the style and characteristics of Wuxia dramas again, but we did remind ourselves that Wuxia is a style and we should expect heavy green-screening and fantastical elements heading in. With that in mind and out of the way, we found ourselves totally back into watching Wuxia dramas as we were totally loving the special effects, the martial arts, the flying people, the story, the plotting, and all the characters with their epic powers.

Chu Li Mo scenes are a favourite of ours. She’s a spunky character. She’s fun to watch. We also love seeing her being rescued by Heartless and supported by deputy head Zhuge Zhen Wo when the maids, including the head maid, bullies her in the initial episodes.

Cold Blood‘s cold, dismissive attitude towards Chu Li Mo and watching him thaw is another part of the series we love watching. The relationship develops the usual way as other series, but with the added danger of Cold Blood‘s wolf poison, it makes this romance arc a bit more interesting to watch. As long as Cold Blood continues to habour and desire revenge (which he does), the wolf poison will become stronger and render him unable to keep himself at bay and attack and kill Chu Li Mo, Heartless, Chaser, Iron Fist—anyone—without second thought.

There’s just a lot to keep things interesting, and eyes and ears watching and listening. Good conflict; cool battles; rootable characters; interesting relationships between not only the main characters, but also supporting characters. The series also does well adding just the right amount of Chu Li Mo and Cold Blood moments before moving off them to focus on the cases, evil doings, or the other romance arcs involving the other deputies which are handled equally well. The balance is fantastic. We never expected to be so excited about this series, but The Four caught us! It’s such an awesome, awesome watch! Addictive. (Zhang Han and Janine Chang are also very cool in this one!)

Give this Wuxia series a try! Let us know what you think of it.

Extra fact: The Chinese series is one of several adaptations of the Woon Swee Oan novels and comes after Hong Kong’s 2008 TVB series, The Four. The Chinese version of The Four is a 2015, currently airing, drama (broadcast date: 17 March 2015) with a production year of 2013.