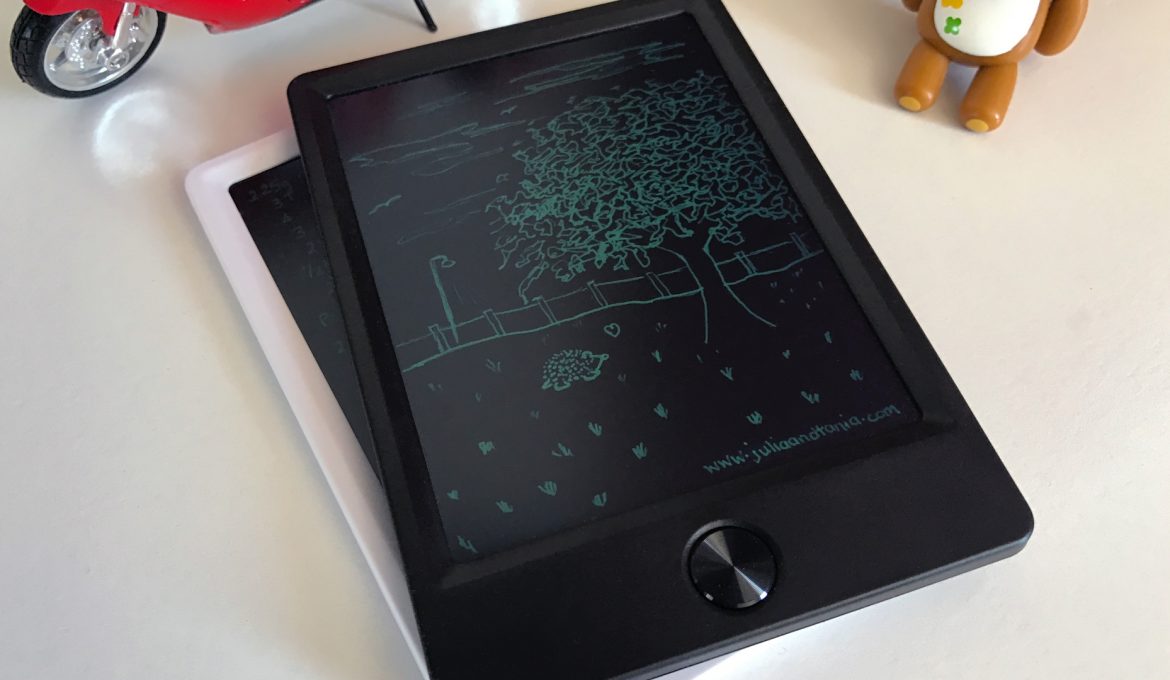 With these LCD writing boards, we find they are a great little board for jotting down a recipe or a shopping list. It’s also handy for a quick note to someone, for brainstorming for maybe a craft, a design or getting a story idea down that might come to you in the middle of the night.

They are great for times when a scrap paper or memo paper cube is preferred over reaching for a cell phone or a tablet to write simple notes, ideas or a list of things. A cellphone or tablet is sometimes too much of a hassle to get a note or list down quickly. In some occasions, it’s a bit of a nuisance to read from a cellphone or tablet, too. To write or read the note on a cellphone or tablet, you have to unlock it, find the note writing app, open the note writing app then write the note or read the note you wrote. There’s also the auto-lock that you have to contend with. It’s annoying during those times when you’re referring to the note you’ve written or pondering what else you should write on that note you’re writing in your cell phone or tablet, but the note has disappeared from the screen because the auto-lock has activated and the device has turned off.

Made out of ABS plastic, the board is light and is a compact size that allows you to slip into a handbag or in an apron pocket. The specifications for the LCD writing boards we bought are:

The writing colour is green. Writing with a light pressure, you get a thin and light writing. Putting a bit more pressure, the writing is thicker and bolder in appearance. You can write pretty small and it’s still very legible.

Readability of the writing on these LCD writing board screens is very good under normal lighting. In low lighting, like pen ink on paper, it is a bit harder to read what’s written on the screen. If there is a light shining on it, it isn’t so good.

We’ve tested to see if taking the battery out will cause any contents to get wiped out when the battery is removed. It doesn’t. Any writing on it is still there after removing the battery.

We’ll probably update this post on what happens to the cleanliness of the writing screen with each subsequent writing and erasing, though. We’d imagine the effect would be the same as a chalkboard where with each subsequent writing and erasing, the board gets dirtier and not be as black and clean with it having a buildup of the remnants of the previous writing. We feel this might be what will happen to the LCD writing board screen as it gets written and erased more and more. We’re seeing very faint writings that we’ve previously cleared creep to the surface and become very faintly visible on the screen. We found this happening when there was something written on it and we haven’t cleared the screen for a while. So far, these faint writings can be rid of by pressing the erase button. After clearing the screen of all contents, the screen is good as new, ready for more writing.

With these LCD writing boards, you will have to be mindful of where you’re putting them, especially if you’re taking it out with you and storing it in a bag with other objects that can press the erase button. With nothing protecting the erase button, you could accidentally press it and clear the screen of any content that’s on the writing board.

We purchased these LCD writing boards from Aliexpress for about US$4 and we think they are well worth the purchase. We don’t think we could buy 50,000 pieces of scrap paper or memo paper cubes for just US$4! Even if these LCD writing boards falls well short of the 50,000 erases, we’re still very happy with the purchase. It’s something we use quite often to jot ideas down that we later transfer to another device. We also use these boards to write a recipe down. We do like to bake and it’s just more convenient to use these LCD writing boards to get a recipe down and read from it. There’s no need to unlock a device or worry about the screen turning off in the middle of baking.

So, the LCD writing board is a nice, compact, light and handy stationery gadget that is an alternative to paper in moments where you just need a piece of scrap paper or memo paper cube!