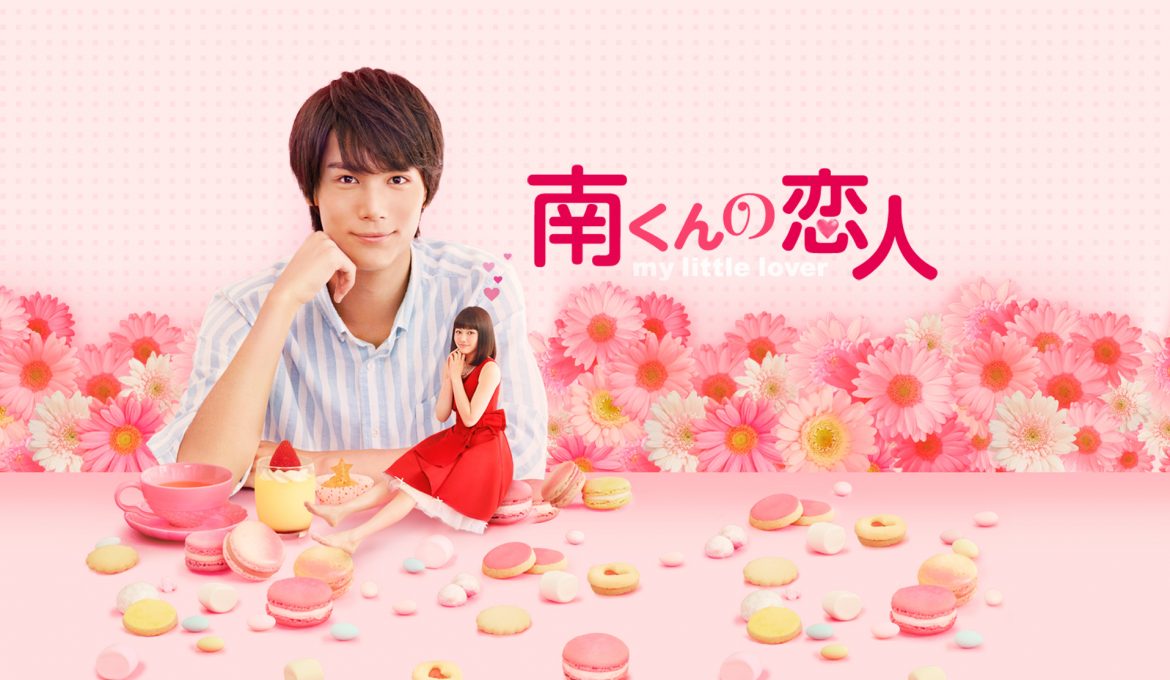 Horikiri Chiyomi wanders over to the creek, tripping over a rock and falls onto her hands and knees into the water. There she spots a shoe floating the water and the One-Inch Princess riding the shoe. Minami Shunichi runs over to Horikiri Chiyomi, checking to see if she was alright.

They move to rest underneath a cave, talking about the way One-Inch Princess floated. Young Minami Shunichi then confesses his feelings to Horikiri Chiyomi: “Chiyomi, I like you a lot”, to which Horikiri Chiyomi reciprocates: “Me too. I like you a lot Minami-kun“. He asks her if they should stay together forever. Horikiri Chiyomi is surprised by the question, but she agrees after Minami Shunichi presents her a flower crown. They make a pinky promise before the two marvel at a colourful rainbow that suddenly appear before them over the sky.

One-Inch Princess, the rainbow, the promise which Horikiri Chiyomi made with Minami Shunichi, were they real memories or fantasy?

Horikiri Chiyomi, grown up, wakes from her dream, questioning the accuracy of her childhood memories. She sits in front of her computer, using her thoughts as material for her online novel. Which part of it was fantasy? Which part of it was real memories? “Did the One-Inch Princess really exist?” she types. “Was the beautiful rainbow and illusion?” Hearing a door slide outside, she peers out her window to see her childhood friend run towards the seaside practicing Kendo. Sadness apparent, she asks, “How about the promise I made with Minami-kun?”

Horikiri Chiyomi and Minami Shunichi used to be close, but after his father left him when he was a boy at school, their friendship deteriorated. Now as 12th grade students starting a new year, he ignores her. When they cross paths, he walks straight past her without greeting. In a class vote for Female Class Representative he backs Nomura Sayori‘s suggestion to let her stand as Class Representative since Horikiri Chiyomi was hesitating in accepting the responsibility after winning over Nomura Sayori by a vote.

As she goes in her way, strong gusts and rain has made its way in. The strength of the wind picks up her umbrella and blows it away. Horikiri Chiyomi chases after it as it heads towards the seaside before stopping just outside the cave she and Minami Shunichi rested after looking for the One-Inch Princess that day in her childhood memory/dream. As she notices the cave, her umbrella is picked up by the wind again and blown away.

With the rain continuing to fall heavily and lightning flashing, Horikiri Chiyomi takes refuge in the cave. She makes a move to make a call, but she drops it into a puddle of water, causing the her phone to die on her. Unable to leave, she huddles herself and wishes to go back to how they were then. She wants to be small again.

The next morning, Horikiri Chiyomi became small again. She became the One-Inch Princess. She is shocked before she gives a smile: everything that she remember, everything that was in the dream was real. She did see the One-Inch Princess which meant that Minami Shunichi‘s promise was also real. Reality then hits her again, she was now not much bigger than the handmade rabbit Takagi Riku (one of her friends and admirer) gave her. “No way!” she screams.

We discovered the drama late last year, about three or so episodes in so we’re a little late to the party. We felt like watching a Japanese drama since most of the time we watch mainly Taiwanese, Korean and Chinese dramas and decided to give Minami-kun no Koibito: My Little Lover a go. The bright pink promotional poster for the drama looked good and the story about a girl turning into a small 15-centimeter person looked interesting. Despite it being a drama probably targeted towards a younger audience, we actually enjoyed this Japanese manga-turned-live action quite a lot.

It has a simple plot and a bit cliche in its set-up, but the story of a friendship between two children souring after one of them decides to not speak to the other anymore has us watching with interest to see what happens in the present. Add the element of one of them being turned into someone no bigger than 15 centimetres and that Minami Shunichi will end up taking care of her.

We’ll be looking forward to seeing how Horikiri Chiyomi and Minami Shunichi‘s relationship will develop when he takes her home. They were once childhood best friends so it should be interesting to see whether or not he’s really let go of their friendship and no longer care for his childhood best friend, as well as whether he’s locked away any kind of feelings for her all this time.

Seeing Horikiri Chiyomi small and navigating around this now very, very huge world of Minami Shunichi‘s room should be fun.

It’s a really short drama, with only 10 episodes, so we are a bit worried about the pacing. In the past, we found that things moved along so fast that it made the drama feel choppy. We hope it’s not the case here. We’ll have to watch and see.