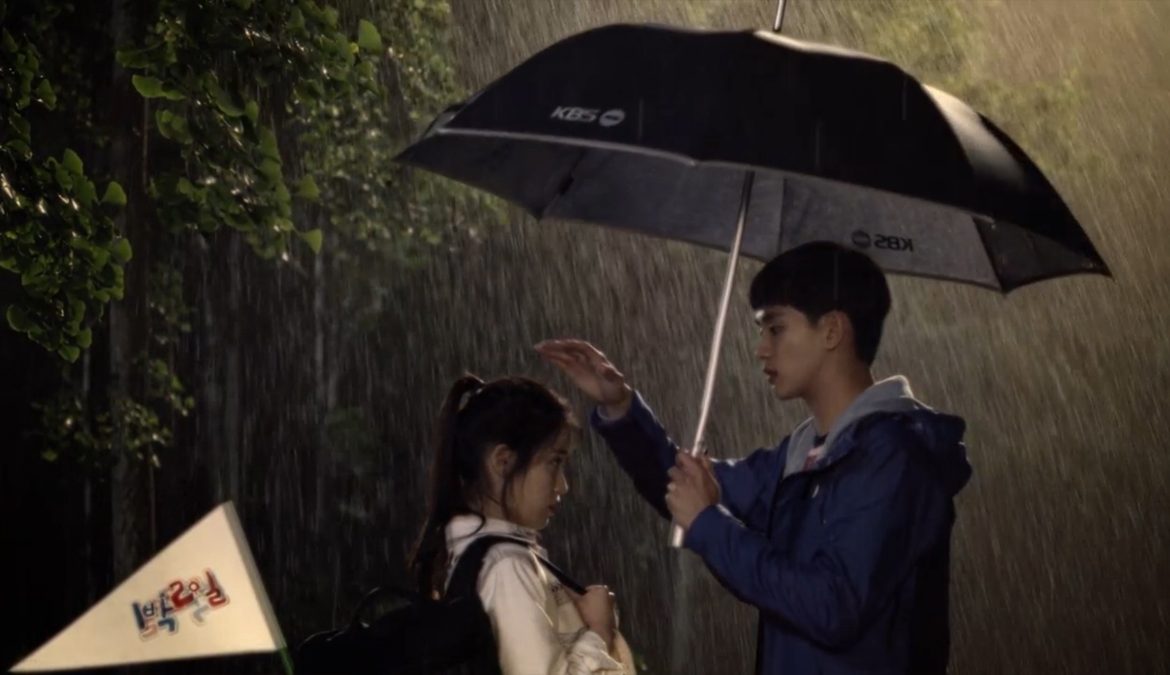 The Producers continues to be really entertaining! We love so much about the series!

There’s a lot of deadpanning and character quirks that constantly makes us laugh. There’s also subtle sound effects in the background that help add to the comedy as well. There was one scene in Episode 3 that cracked us up. It was the scene with the video call scene between the Chief Producer, Kim Tae Ho (Park Hyuk Kwon), and JYP Entertainment’s CEO. Kim Tae Ho wishes to cast Suzy for Ra Joon Mo’s failing show and makes the request. But when he does make the request, the image of JYP Entertainment’s CEO lags, jumps and freezes. After several moments of trying to have the technician fix the connection, the image of JYP Entertainment’s CEO starts moving again. Kim Tae Ho makes the request again. Yet again, the video stalls. In the end, the request never gets through as Kim Tae Ho must leave the video call after he got called out to handle something. We find out that there was actually nothing ever wrong with the connection. It was the JYP Entertainment’s CEO acting like there were connection errors so he could dodge answering the request: after Kim Tae Ho leaves the room, he immediately comes back life and talking to his ‘partner in crime’ technician on the other side of the video conference with no lags, jumps or freezing in video at all! It was too funny. It’s still so funny thinking about the scene even now!

There was quite a funny scene in the opening of Episode 4 as well. It’s where Baek Seung Chan is at the door of Ra Joon Mo’s apartment, drunk. He had bought hotteoks for Tak Ye Jin. After what seemed like a whole lot of hours having gone by since he bought the hotteoks (it was light when he bought it and was dark when he made it to the apartment; he also had a meeting with Cindy and an after hours drink with his superiors prior!), he’s making true of his promise of buying her hotteoks and hands them to Tak Ye Jin’s. He then gets unbalanced from his drunken state and requires support from Tak Ye Jin’s shoulder. When Baek Seung Chan returns back up, he readjusts himself: suddenly, we see a difference in the way his eyes look. We don’t know if this was on purpose or even something that was supposed to be comedy in the series, but we were laughing!

In our first post on Episodes 1 – 2, we found Kim Soo Hyun’s character, Baek Seung Chan, and IU’s character, Cindy, interesting. After watching Episode 3 and Episode 4, we’re adding Gong Hyo Jin’s character, Tak Ye Jin, as interesting as well. We loved Gong Hyo Jin in Pasta and Master’s Sun, so Gong Hyo Jin was one of the reasons we chose to watch The Producers (Kim Soo Hyun was the other and the story sounded interesting). Why we find Gong Hyo Jin’s character in The Producers interesting is the fact that she is headstrong, tough, confident and has the respect of the people around her. But, because she is so strong, she has the problem of keeping men interested in her and staying around. In addition, the one that she has her eyes on, Ra Joon Mo, doesn’t seem to see her as a woman as well. And so, we’re rooting for Tak Ye Jin for this reason and we hope to see Ra Joon Mo slowly see Tak Ye Jin as someone he’s interested in.

Ra Joon Mo, one of the four main characters in this series, he’s not standing out as much as the other three characters. There hasn’t been many things interesting about this character. We only know that he is a program director helming a show that is up for cancellation. But this situation of Ra Joon Mo’s, his show being up for cancellation, it is quite a driving force for character and relationship developments in the series. So, he’s quite central to the story in that way, but the character just doesn’t stand out. Maybe, later on, his character will get more interesting when the series starts focusing on his character.

Cindy, we’re really liking this character in the story. She is getting even more interesting after four episodes. She is said to be slowly gathering anti-fans, seemingly lonely and she is the unpopular one amongst other celebrities. This episode sees her agreeing to participate in Ra Joon Mo’s failing reality show, 2 days 1 Night. The cast members of the show had to choose the person they’d like to partner up with. For the event where a cast member doesn’t get chosen, they will have to partner up with one of the crew members of the show—that person being, Baek Seung Chan. No one chooses Cindy and she ends up hike up to the filming location with Baek Seung Chan whilst the other cast members get driven to the filming location. Cindy takes it well though as she does it and we don’t see her throwing a fit behind the scenes for such an embarrassing scene. We love that Cindy is a character that doesn’t take herself too seriously. And we love that this character who’s at the top and in the spotlight is being portrayed as being someone that people in the industry don’t like. It means we will be seeing potential for her character to grow into someone that (hopefully) people can’t help to like!

The relationships that’s developing in The Producers, very entertaining and awesome!

We love the scenes between Baek Seung Chan and Tak Ye Jin! They have been very entertaining and there have been some nice moments between them. What makes this pairing so great is that, where Ra Joon Mo and (seemingly) every other guy feels like Tak Ye Jin doesn’t need to be treated like a lady because she’s so strong and knows how to change a light bulb and is able to carry heavy boxes, Baek Seung Chan sees Tak Ye Jin as a lady and does assist her in lifting heavy boxes and help her get parked cars out of her way when they block her. We actually ship this pairing. There’s been scenes where we wonder if Baek Seung Chan might be noticing Tak Ye Jin or if it is just him trying to figure out whether Ra Joon Mo is being a two-timer or not. We’re sure this pairing will just be a superior-subordinate/older sister-younger brother-type relationship, but we do love the interactions between these two characters. Not only that, seeing two top actors acting opposite each other is a feast for the eyes! :oP :oP.

We can’t wait for next week’s episodes!