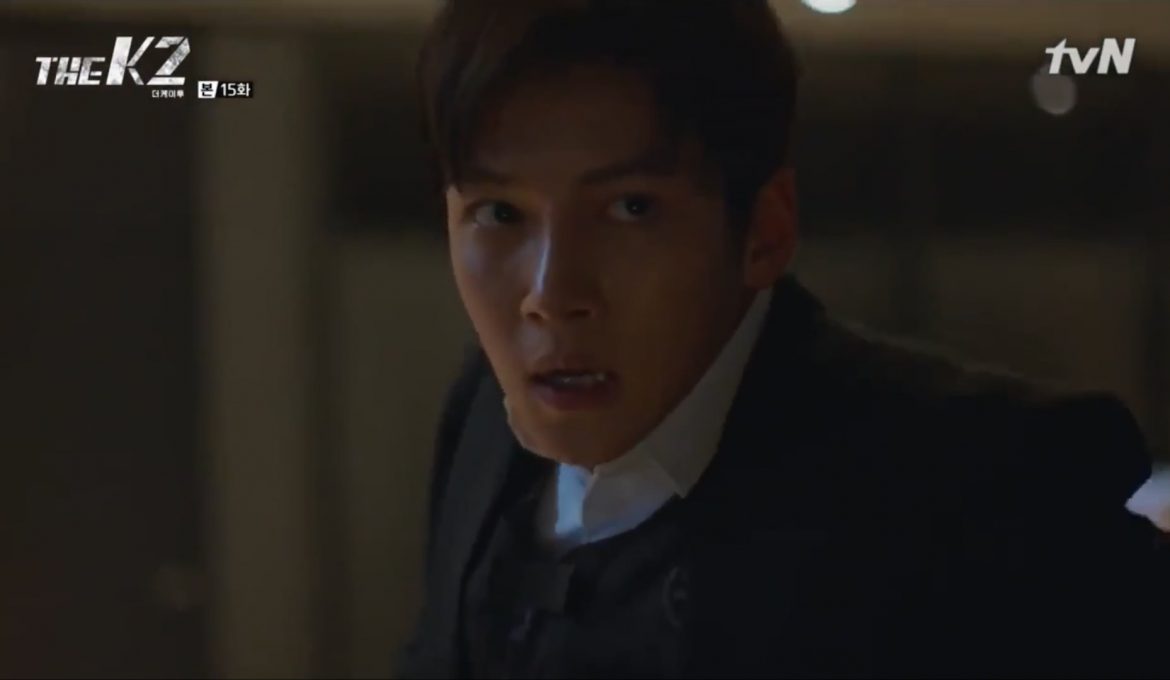 The story passes without any suspicion from Park Kwan Soo. As far as Park Kwan Soo understands, it all makes sense because Kim Je Ha is a mercenary working for him and only cares to be paid that sum of money he was promised.

So, Kim Je Ha is escorted out of Cloud Nine to retrieve the memory card without a fight. Choi Yoo Jin, though, is left in the room to stand her ground. Just before Kim Je Ha had left, he had given some words of advice to Choi Yoo Jin: he thinks she should leave Cloud Nine and Mirror behind and free herself from a slave-like existence which the place apparently creates. He believes that if she could leave it all behind (and let go of that power which she’s trying to keep through it), she might become a bit happier than she is how.

Choi Yoo Jin isn’t willing because Mirror is her. Kim Je Ha interprets that to mean she can’t bring herself to give up the incredible power Mirror provides her. She doesn’t deny it. But it’s also because of the power Mirror provides its owner, she can’t simply give it up to just anyone. If anyone experiences it first hand, they’ll become greedy and want it for themselves. The fact that Choi Sung Won is after Mirror despite holding so much power already as a chairman of a conglomerate suggests Mirror is even more powerful.

Choi Yoo Jin was going to bank on Choi Sung Won being forced by his own men to diffuse the bomb or go down with Cloud Nine like a captain goes down with their ship.

Waiting for the time Choi Sung Won’s men to turn against him didn’t take much it seems. Shortly after Kim Je Ha was reported to have left the building (never to return to Cloud Nine ever again, Kim Je Ha had told Choi Yoo Jin), all Choi Yoo Jin had to do was offer a billion dollars to his two men in the room to shoot Choi Sung Won, and within seconds, they had their guns trained on him. The rattled Choi Sung Won managed to save himself by reminding the two men and Choi Yoo Jin he was the only one who knows the pin to diffuse the bomb, that once he’s gone and is moved from the bomb, the bomb would detonate.

Not one to let anyone off lightly (unless you’re Kim Je Ha), Choi Yoo Jin has the JSS President keep his word. She tells him to die right then and there on the spot. His head falls in dread, hesitating to do it, but, no doubt, he knows Choi Yoo Jin isn’t playing around and won’t give him another chance after this. So, after being pressed for an answer to whether he will do it or not by Choi Yoo Jin, the JSS President takes a gun from the pocket of one of Choi Sung Won’s men and shoots himself in the head.

Kim Je Ha’s in pretty bad shape. A couple blows to his gut sends him to the ground, unable to do much about the hitman who’s looking to shoot him at point blank range. Kim Je Ha knew he’d be in trouble and had requested Choi Yoo Jin send Chief Joo after him before leaving Cloud Nine. So, fortunately for Kim Je Ha, Chief Joo shows up right on time to take the hitman out from behind, killing him.

Park Kwan Soo, who was left waiting on the phone whilst the hitman was supposed to see that Kim Je Ha is taken care of, is left shocked to hear the one to bring the memory card is Kim Je Ha not his hitman, and he wants that money Park Kwan Soo promised ready and waiting for him. Obviously, Kim Je Ha has no intention of going there to hand over the card for some money. He just wants to make Park Kwan Soo know he’s alive, his hitman is dead, and for him to start being afraid, because he’s coming after him.

With Cloud Nine and Mirror in danger of going to Choi Sung Won, or being blown up with Choi Yoo Jin in it, Kim Je Ha now wants to use the memory card not against Choi Yoo Jin to protect Ko Anna from her, but to bring down Choi Sung Won and Park Kwan Soo.

Seemingly the threat of Choi Yoo Jin is no longer his greatest concern. After what transpired in Cloud Nine, Choi Yoo Jin’s demand that Ko Anna get on a plane and leave the country turned out to be the one good thing Choi Yoo Jin did for Ko Anna (this was something Kim Je Ha acknowledged when he asked about her following Choi Sung Won’s storming of Cloud Nine). With Ko Anna about to board the plane and on her way out of the country, neither Park Kwan Soo or Choi Sung Won should be able to use her as a hostage.

Choi Sung Won and Park Kwan Soo are more of a threat than Choi Yoo Jin now. If they got their way, Choi Sung Won would be equipped with an amazing amount of power to use however he wishes, while Park Kwan Soo would become president. Or Choi Yoo Jin will go down with Cloud Nine and gets killed while holding onto that power she won’t let go.

In Kim Je Ha’s view, instead of using this card to ensure not only his and Ko Anna safety, but allow Jang Se Joon to become president, the contents in the memory card needs to be revealed to the world so Choi Sung Won and Park Kwan Soo can be stopped and Choi Yoo Jin can be saved.

We can’t help think Chief Joo’s got his own interests in mind. Both these options on what to do with the memory card relates to Chief Joo’s career aspirations. Becoming a Blue House security chief, serving the president is pretty much guaranteed once Kim Je Ha hands over the memory card. Never mind the real possibility Choi Yoo Jin will go down with Cloud Nine and die: “Je Ha, for the greater good, sometimes…” he began saying in response to Kim Je Ha’s mention of Choi Sung Won getting Cloud Nine, or Choi Yoo Jin being killed along with Cloud Nine. He no longer sides with Choi Yoo Jin now that her power and her life is under threat. Jang Se Joon is a better bet to achieving this dreams.

Jang Se Joon tries to convince Kim Je Ha, saying that he’d be lower than a puppet president without the memory card now that Cloud Nine is under threat of being taken over or being blown up. He’d be a scarecrow. Jang Se Joon isn’t wrong since, without the power of Choi Yoo Jin’s Cloud Nine and Mirror which keeps people like Choi Sung Won and Jin Han Group from obtaining too much power, and the information in the memory card which controls the presidency, he doesn’t have all that much power behind him at all.

That reason doesn’t float with Kim Je Ha. He doesn’t see why he’d be concerned with being either when what he needs to be is a father to Ko Anna. Still, Kim Je Ha does end up handing the memory card over, “I’ve grown sick and tired of you people” he tells them (maybe he sees a slight point in Jang Se Joon’s argument after all) before leaving the car to go after Park Kwan Soo.

Kim Je Ha had originally wanted to use the card to protect Ko Anna from Choi Yoo Jin, but it looks like he thinks it’s safe to go after Park Kwan Soo on his own with explosive left behind by the dead hitman and not worry about something happening to Ko Anna. Just to be sure though, he gives Ko Anna a call. He’s not able to connect to her phone, but he thinks nothing of it, seemingly thinking she’s boarded the plane and has turned off her phone.

That’s what’s happened, but just as the plane prepares to take off, Police shows up requesting Ko Anna get off the plane. It’s a request which comes after Park Kwan Soo learns of Jang Se Joon coming into possession of the memory card after Kim Je Ha left it to him. Jang Se Joon tells his political rival he wants to meet with him and the consortium to discuss.

This consortium consists of a number of powerful members including Choi Sung Won, the Jin Han Chairman, Kim Suk Han and (we think) the President. Park Kwan Soo don’t appear to be a part of this consortium, but he and the Consortium seem to be all involved in the Kumar oil and gas development fraud one way or another.

What a scheming, double-crossing, despicable man Park Kwan Soo is, sending Choi Sung Won in with a bomb he can’t diffuse! At the same time, we got to give it to Park Kwan Soo for coming up with such a great way to take out all his rivals, problems and threats to his claim on the presidency in one go! He can get rid of Cloud Nine, Mirror, Choi Sung Won, Choi Yoo Jin, the memory card and Jang Se Joon with one explosion.

We just hope that Park Kwan Soo doesn’t get his way, like maybe Cloud Nine being situated at the bottom is bomb-proof. Maybe the live streaming of the situation in Cloud Nine can be used later, once all the Good Guys get out of the place will bring Park Kwan Soo to justice.

We really hope the good guys include Choi Yoo Jin because there’s a couple more hints that she might not be responsible for Ume Hye Rin’s death. The JSS President was said to have “taken care” of the Ume Hye Rin incident under the ex-chairman’s orders. (We’re assuming the ex-chairman is Choi Yoo Jin and Choi Sung Won’s father.) So, the JSS President’s involved somehow. Near the end of the episode, Ko Anna also finally remembers who that man who was at Ume Hye Rin’s place that night: it was JSS instructor Song Young Choon! It makes sense why he comes off as knowing a bit about the situation whenever he mentioned it.

Please let it be that Choi Yoo Jin is a good guy. And we don’t know why, but we have this worry that she might die. She did give off the impression she can’t be without Cloud Nine, Mirror and the power it gives her. So, we hope she lives and doesn’t choose to go down with the ship and choose to take Kim Je Ha’s advice to leave it all behind and live a happier life.