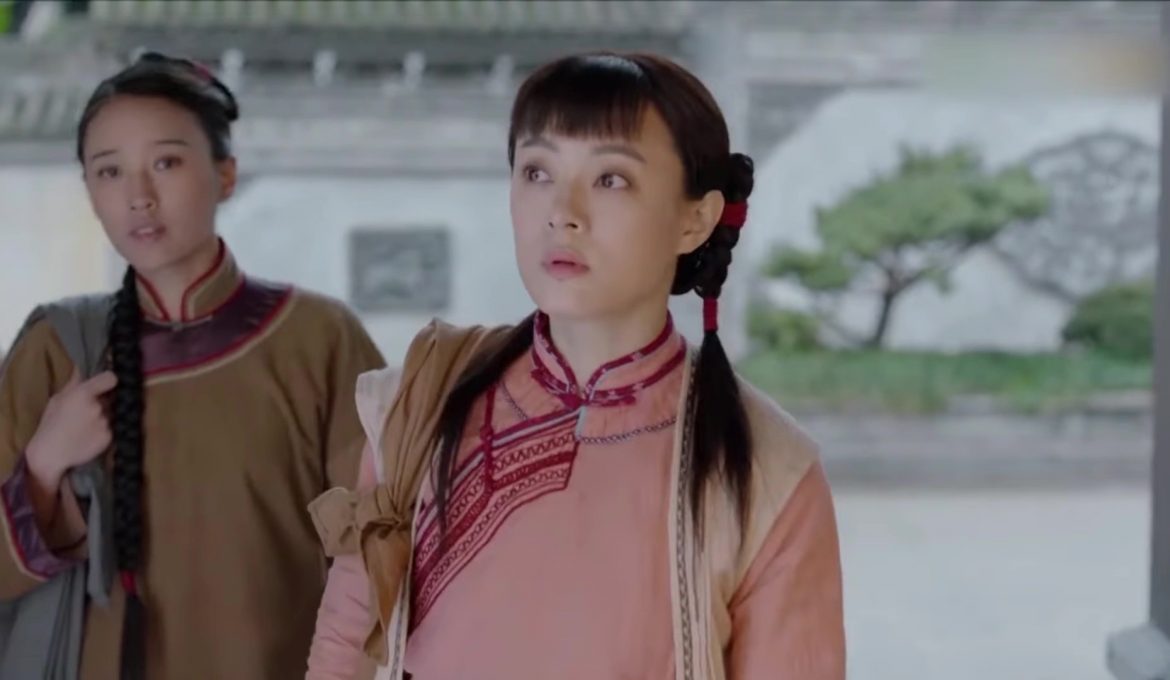 It’s been a long time since we’ve watched a drama set in the Qing Dynasty period. Our last one was My Fair Princess. One of the reasons we haven’t been inclined to watch dramas set in the Qing Dynasty is because of a very superficial reason – the unique hairstyles. The half shaved heads doesn’t make us click. We’re more inclined to watch something set in the Ming Dynasty (Iljimae Chinese version, The Four). We’ll probably watch dramas set in Tang Dynasty, too, but we can’t think of one we’ve seen on top of the head. We know, the hair doesn’t have any influence on how good the story is, but it has stopped us, but it will stop us no more!

Thanks to a friend’s recommendation, we’ve gone back to including dramas set in Qing Dynasty, ditched our superficialness and clicked on Nothing Gold Can Stay / 那年花開月正圓, which we heard is doing extremely well with Chinese audiences. Our thoughts? We’re still trying to get a feel for the story, but it looks like the story is going to be surrounding business, trade and political power possibly. There are suggestions of conflicts/developing conflicts between long time partners as well as long time rivals.

Origins of female lead character, Zhou Ying (Sun Li), is unknown. We can’t quite see what will become of her in the future episodes, but it looks like she might look for Wu Pin (Peter Ho) for help if that business card he gave her is any indication of things to come.

We can’t imagine a romance arc between Zhou Ying and Shen Xing Yi (Chen Xiao) coming in at the moment, but the two are interesting. Zhou Ying’s lowly status but strong, crafty character is going to be great against the spoilt, demanding young master of a wealthy household.

Now, onto the recap!

Nothing Gold Can Stay Episode 1 Recap

Surrounded by a large crowd of Jingyang folk, female lead character, Zhou Ying (Sun Li), and her father put on a performance to gather gratuities from the crowd. This performance involves her father exhibiting Kung Fu skills inherited from Shaolin and Wudang, and having his daughter swing a guandao (a type of blade used in martial arts) into his abdomen without causing injury. The display has a member of the crowd call the act fake: after all, his daughter is the one swinging the blade and he questions the amount of strength his daughter actually used. The member of the crowd then suggest the spectators leave.

This member of the crowd appears to be some critical, doubting spectator, but he’s actually part of the act. His role is to come in, call out the performance as a fake before going in to have a swing at Zhou Ying’s father and causing an accidental fake death. The fake death would then cause the crowd to sympathise with the deceased father and daughter and offer plenty of gratuities.

This act works like a charm. The crowd fill their dish with money, enough for the father, daughter, doubting spectator and their friends to enjoy a good meal.

Main character Wu Pin (Peter Ho) makes his entrance into the scene next as a bit of a gullible businessman. An opportunistic Jingyang folk purposely throws himself in front of Wu Pin’s cart, claiming his cart had run over him and caused a broken leg.

Standing amongst the large crowd that’s gathered is Zhou Ying and Du Ming Li (Yu Hao Ming). Zhou Ying will be using this act against him for her own gain later. But for the meantime, Du Ming Li enters to expose the opportunistic man for the liar he is.

Du Ming Li gives the opportunist a strong kick at the shoulders to release his hold on Wu Pin’s leg. The man is then sent running on his clearly very good legs after Du Ming Li prepares to send another foot flying towards his abdomen.

Wu Pin thanks the stranger who just came to his aid and reveals that he was aware of the man’s blackmailing intentions, but he just didn’t have any idea of how to deal with him.

The two part ways, but not before Wu Pin requests to know Du Ming Li’s name. Maybe he’s looking to pay him back in kind. Du Ming Li tells him what he did is no big deal and his name isn’t worth mentioning.

Zhou Ying appears in front of Wu Pin now, pretending the opportunistic man before is her brother in order to get some taels out of him. She apologises for her brother’s behaviour—behaviour which she says he hasn’t displayed for a couple years—and offers him her jade necklace as compensation for what her fake brother took.

She tells him a sob story about her dad having passed away, her mum being ill and her brother having gone days without food. It has Wu Pin seem to patronise her with a question about her origins. This question allows her to go into another sob story about having experienced drought in her hometown which is why she left in order escape famine.

Wu Pin sends her on her way then, showing her the direction her brother went. He advises her travel ahead and ask others for further directions. It prematurely ends the conversation, not allowing her to achieve her goal.

Zhou Ying makes a move to leave, but an idea to prolong the meeting seems to hit her. She turns back around and tries selling him her jade necklace. He rejects needing such an item. This has her make up a story about needing some teals in order to get the doctor to treat her mother. Sympathising with her, he gives her five teals. He doesn’t take her jade, though. He tells her to keep it since it‘s an heirloom that’s been handed down to her. Taking his sympathy up a further level, he even offers her his business card, telling her she should contact him anytime she experiences any difficulties in the future.

Wu Pin escapes being tricked by a man claiming a broken leg from being run over, but he doesn’t manage to escape the great acting skills of Zhou Ying. He’s seen hopping back into his cart and pitying her: he makes a comment to his aid about how honest she is unlike her (fake) brother. If only he knew how wrong he is.

Returning home to her father, we learn Zhou Ying’s been sold to the Shen Household because her father’s already managed to gamble everything they just earned away.

The Shen Household is the second wealthiest household in Jingyang and the household male lead Shen Xing Yi (Chen Xiao) is from.

We also learn the man she calls her father isn’t her biological father. Her origins isn’t actually known by her. His story about where he had found her seem to change. He’s told her she was found in a wolf’s den before and comes from a wealthy family, but sitting together presently, he tells her he found her during a flood, inside a wooden tub. Her foster dad could be purposefully hiding the truth from her or he truly doesn’t know her true origins.

The Good Samaritan who came to Wu Pin’s aid on the street is revealed to be Du Ming Li, a business owner Wu Pin is connected through a previous dealing via his assistant. Du Ming Li had opened a business (apparently called Longshenghe) some fortnight ago which had Wu Pin send congratulatory couplets via his aid.

Wu Pin discovers their connection during their second meeting at his place, which sees Du Ming Li pay a visit out of courtesy following receipt of Wu Pin’s congratulations.

In this meeting, Du Ming Li’s revealed to be a Jingyang native who moved to Beijing at the age of eight. He goes on to talk about Longshenghe as being owned by Bei Le Ye. Du Ming Li simply helps look after Longshenghe.

Du Ming Li moves to ask if Wu Pin has any interest in taking on some business in this area. Wu Pin is interested: he’s interested in all business. This leads Du Ming Li to reveal a case the government is investigating, and it has to do with people called Hu Xue Yan, General Zuo and Wu Wei Wen.

His advice, stay far away.

Zhao Ying enters the Shen Household, Qian Hong introduced as possible love rival or is she?

With a group of other ladies, Zhao Ying enters the household belonging to Shen Xing Yi. She is greeted with an argument near the entrance. Qian Hong (Niki Chow) , a woman who claims Shen Xing Yi had promised her marriage, is being asked to leave by Shen Xing Yi’s older brother. She won’t leave though and insists he ask Shen Xing Yi to come out and see her.

Shen Xing Yi looks to have gotten himself into this unintentionally and couldn’t handle the aftermath, requiring his older brother’s help to send Qian Hong away. It started with Shen Xing Yi spending 1000 teals on listening to her song all because he was competing with some person called Ma Hong Cai who offered 800 teals. Shen Xing Yi’s higher offer led to her wanting to be together with him.

Shen Xing Yi rejects such suspicions. He considers his relationship with and Ma Hong Cai a close one.

Walking past the scene at the entrance, Zhao Ying and two other ladies are brought inside. They are told about the positions the three need to fill, one of which involves being Shen Xing Yi’s servant—a position Zhao Ying takes as other positions are taken up by the other ladies first.

With Shen Xing Yi having been lectured by his brother about Qian Hong, he’s not in a good mood. It’s further aggravated when Shen Xing Yi unwittingly grabs a hot tea cup Zhao Yi delivers, causing him to lash out at her.

Zhao Ying is quick though and manages to dodge his swipes at her before she lands a strong kick to his chest, sending him flying.

Their first meeting is not a good one, but she might possibly have redeemed herself a little when she helps him sooth the pain from the beating he received as punishment from his father for spending 500 taels on a woman. (Shen Xing Yi’s older brother lied to his father and said 500 taels instead of the actual 1000 taels.)

Ending the episode, Bei Le Ye receives a rejection to cooperate in the form of a type of Oolong tea from Fujian. Fujian is where General Zuo is at the moment and so a gift of tea from Fujian is read as a message from Wu Pin that he has decided not to collaborate with Bei Le Ye. Seeing that to be the case, Bei Le Ye sings that he will mess the hell out of them.