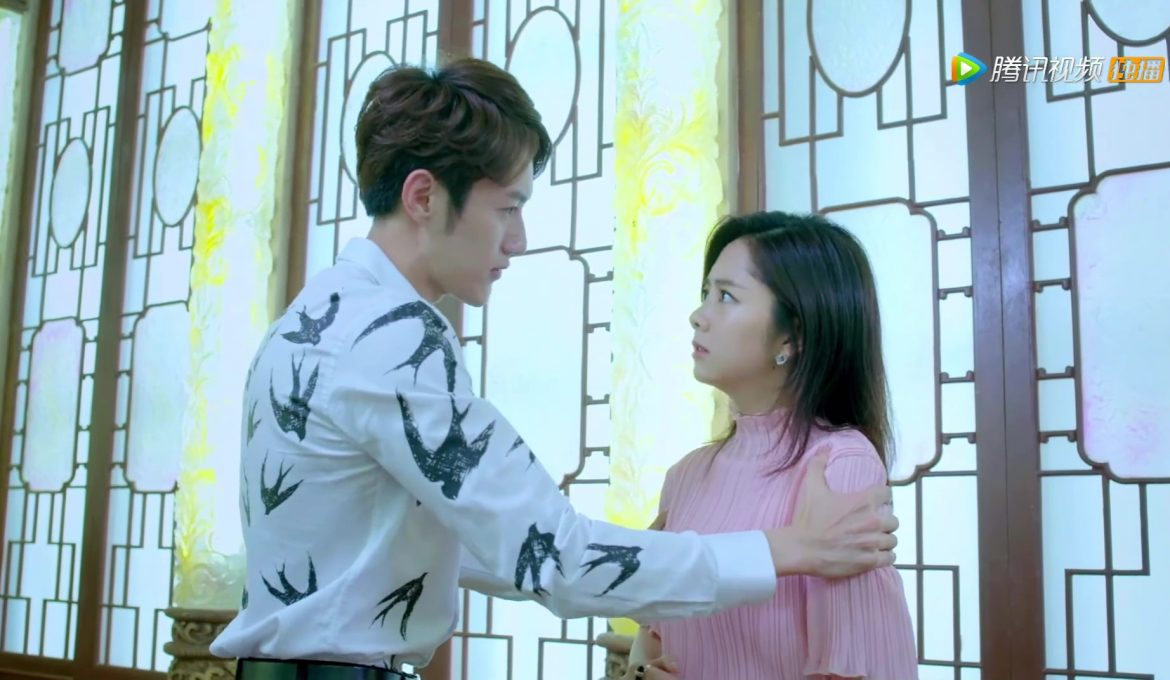 This episode has us get to know a bit more about Gu Cheng Ze. We see he has a traumatic childhood experience. We see Gu Cheng Ze getting Li Yan Shu thinking about why she let him, a guy, come into her room and sleep on the same bed overnight. Maybe this is the episode’s way of showing us that Li Yan Shu has started to like Gu Cheng Ze, but unaware of it herself. It’s very hard to tell. It’s a topic that the episode talked about and we found it interesting. :o) :o).

For a time, Gu Jin Yun isn’t being a meanie to Li Yan Shu. That’s quite refreshing to see. We see him spend some time wondering if Li Yan Shu still has lingering feelings for him. But, he goes back to being his difficult self and giving Li Yan Shu a hard time come the time when Hai Lian Na begins working with New Face.

Many things developing in Episode 9. We’ll see what they all build up to later on. :oD :oD.

“Where exactly is CEO?”

Gu Cheng Ze not turning up to work has Secretary Gao thinking about him from his time at work through to his evening out with his colleague after work. Gu Cheng Ze is looking to be spending his night inside his car, parked outside the hotel he had found to have standards too low for him to stay at. Li Yan Shu is also with Gu Cheng Ze in the car. She’s hungry. Gu Cheng Ze has the rule of no eating in the car. But, he makes an exception this time. Li Yan Shu asks Gu Cheng Ze for some money to buy food. He hands her a note and allows her to go get some food from a convenience store in the vicinity to bring back to eat.

“He’s pickiest with what he eats. If he doesn’t know the origins of it, he won’t touch it.”

There’s nothing except food from unknown origin. Gu Cheng Ze refused to eat the food that Li Yan Shu came back with from the convenience store even as his stomach was rumbling. But, after some time, Gu Cheng Ze isn’t able to stand the hunger anymore. He dives into the snacks of unknown origin.

“I don’t know if CEO slept well last night or if he’ll come into work today.”

“Other than his own place, even if it’s a five-star hotel, he’ll barely manage to fall sleep.”

Gu Cheng Ze slept in a hotel utility room in the same bed as Li Yan Shu last night. He collapsed after the rain and thunder brought on memories of a traumatic event that took place in a similar weather event during a time in Gu Cheng Ze’s childhood. Gu Cheng Ze slept well, but he’s shocked to find himself waking up in a substandard bed and room. He demands Li Yan Shu to tell him how he got there. Of course Li Yan Shu tells the truth. It was with his own legs. However, Gu Cheng Ze doesn’t believe it. Li Yan Shu decides to say, with the rain being particularly heavy, she was worried he would get a cold from sitting in the car. She asked the reception lady to knock him out and carry him into the room. This is a lie and it dehabilitates Gu Cheng Ze.

Li Yan Shu returns back to the office by herself. She gets news about Hai Lian Na’s agreement to working with New Face.

“It’s the contract to have Hai Lian Na as spokesperson. We received it ten minutes ago. Hai Lian Na has signed and agreed.”

Gu Cheng Ze’s rude, but truthful words made Hai Lian Na have a change of heart. Li Yan Shu shows the contract with Hai Lian Na’s signature to Gu Jin Yun. She gets a response she didn’t expect to come from him. Gu Jin Yun congratulates her.

Gu Jin Yun’s mind is on the photograph Li Yan Shu’s mother showed him in his meeting with her earlier. This meeting had given him two pieces of interesting information. The first one is that the person who he thought was Han Jun Yao’s mother—gathered from a past introduction at a parents day in class at school—was actually Li Yan Shu’s mother. Her reason for coming into Sheng Hong looking for him was to ask for his help in getting in touch with Li Yan Shu who hasn’t been picking up her calls. The second piece of interesting information was that he may still currently be someone important to Li Yan Shu.

“This child, Yan Shu, she has very few things she treasures. But I found this photograph stored alongside the things belonging to her deceased father. I feel she definitely doesn’t see you as a regular friend.”

Li Yan Shu brings Gu Cheng Ze some medicine for his upset stomach after some words of criticism from Secretary Gao about how poorly she looked after Gu Cheng Ze on the business trip she went on with him that he annoyingly didn’t.

“Had the CEO taken me on the business trip, such thing would definitely not have occurred.”

On the trip back home, Gu Cheng Ze had to ask Li Yan Shu to do a stop at a restroom. He had diarrhoea. The snacks Gu Cheng Ze had snuck to eat the previous night seemed to be the culprit.

Li Yan Shu gives Gu Cheng Ze instructions on how much to take of the medicine for his upset stomach—eat more if it’s relatively bad and less if it’s not so bad. She suggests for Gu Cheng Ze to take some and attempts to get a bottle open to have him take some medicine, but Gu Cheng Ze doesn’t pay much attention to this gesture from Li Yan Shu. He continues working on his laptop and ignores Li Yan Shu’s request for him to help her open the bottle.

“Who got scared to the point of coming into my room?”

“A certain someone who’s usually looking aloof and unapproachable was like a little kitten when the thunder sounded last night.”

“Do you have delusional disorder?”

“Do you have amnesia? Last night you came to my room. You slept in that utility room for the night.”

“That utility room, that sanitary condition, I won’t go there not even in my dreams.”

“Furthermore, a guy going to your room in the middle of the night, why didn’t you refuse?”

“Don’t tell me you’re secretly in love with me?”

This question stumps Li Yan Shu at the time Gu Cheng Ze asks. Later on, over at Gu Cheng Ze’s neighbour’s place, she comes up with the reason of Gu Cheng Ze being her boss. She can’t push him out to get wet in the rain. She’d have to pack up and leave the next day if she had pushed him out into the rain. Gu Cheng Ze was also vulnerable like a stray cat or a stray dog. She’s a good person who feeds stray cats and dogs. These are the reasons Li Yan Shu gives. But, Li Yan Shu seem unsure about them even after giving them. She also seem unconvincing to Gu Cheng Ze’s neighbour who listened and observed her with some amusement in his expression.

“You were with me because of money back then. Then why did you keep this photo? According to your mother, this was stored with your father’s things.”

“Gu Jin Yun, even if I continue to keep this photo, there’s still nothing between us. So, don’t keep coming at me with your feelings.

“Even if I was the one who was in the wrong originally, I intend to be in the wrong till the end. Keep your distance from me.”

The photoshoot ends with an accident when Li Yan Shu, not happy with another one of Gu Jin Yun’s commands that troubled her to do another trivial thing, puts too much force into holding the ladder Hai Lian Na was climbing up for the photoshoot. Hai Lian Na becomes unbalanced. Li Yan Shu cushions Hai Lian Na’s fall. Li Yan Shu’s leg gets injured.

Gu Cheng Ze hears the news from Secretary Gao. He gets information that Hai Lian Na has some scratches, but is fine. She’s gone to the hospital for a checkup. Gu Cheng Ze enquires about Li Yan Shu’s state.

“What about Li Yan Shu?”

“Because she got fallen on, her injury is more serious. She’s been taken to the hospital.”

Gu Cheng Ze therefore isn’t able to take a visit to see Li Yan Shu at the hospital. In the meeting, Gu Cheng Ze types and deletes messages to Li Yan Shu. He’s not quite sure what message is best to send to Li Yan Shu. He deletes “Are you okay?” and “Is your injury okay?” The heated debate that’s going on around Gu Cheng Ze between the department heads becomes too rowdy for him. He slams his phone on the table and exclaims, “Enough!”

Moments in The Fox’s Summer – Episode 9