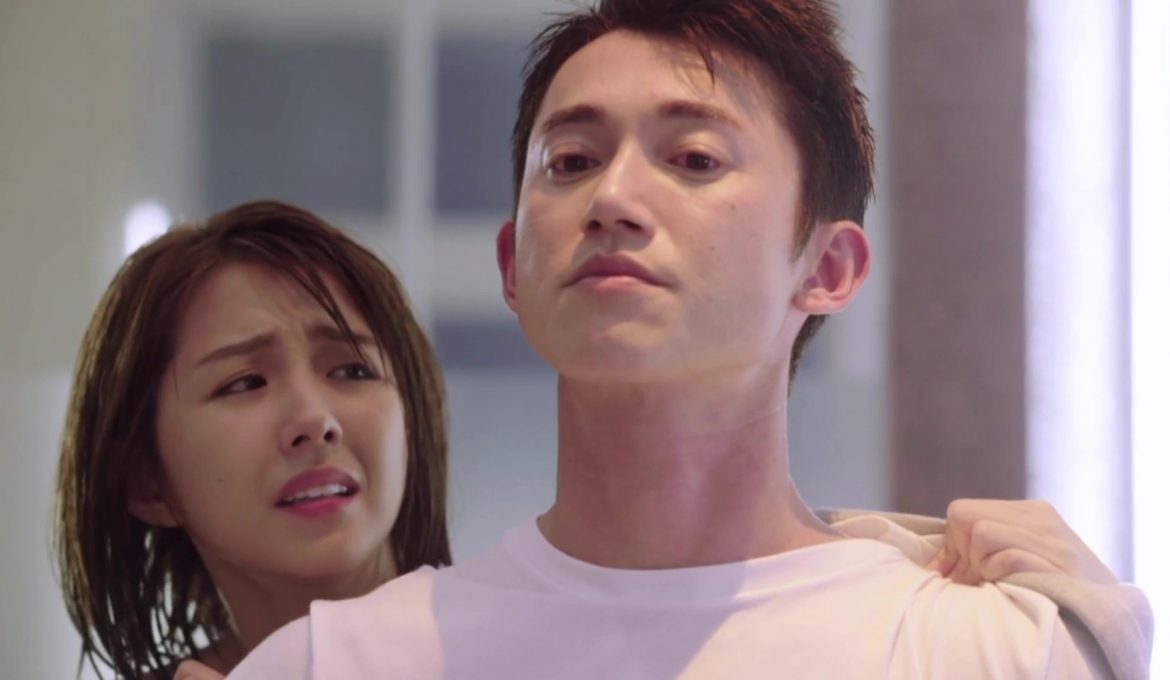 Such a fun episode!

We’re in the Huo residence for the majority of the episode. It’s lots of funny and cute moments between Huo Ting En and Wei Fen Qing. There’s the continuing competition between the mothers. It’s the light and entertaining kind that we find like. :oD :oD

We like what seems to be coming next. Seems really fun!

“Even if I agree, my mum definitely won’t. It can get pass me. But it won’t get pass my mum.”

When Wei Fen Qing arrives home, she finds packed suitcases. She thinks her mum is going abroad. However, they are hers.

“Qing Qing, when you arrive at the Huo household, make sure you are careful with what you say and do. Don’t go say anything wrong. Most of all, adjust that bad temper of yours.”

“Sis, you must do your best. As soon as you marry into a wealthy family and become an upper-class woman, you’ll be living it up!”

“We maybe… most likely… probably… definitely will never break up. So, just accept me.”

“Fine. No problem. In that case, Ru Xi will also move in.”

“I’ve already agreed for you to be a special guest on her programme. When she moves in, it’ll be convenient for you both to discuss about programme details.”

Grandma Huo agrees to allow Meng Ru Xi to move in. Gong Mei Li doesn’t find it a particularly good idea, however. Grandma Huo changes her opinion upon Gong Mei Li’s objection. She finds Gong Mei Li makes a valid point. They’d be short of rooms and would be poor hosts when guests come if Meng Ru Xi moves in as well. She then settles on an idea where both Meng Ru Xi and Wei Fen Qing can move in without a shortage of rooms.

“Fiancée, you two sleep in the same room.”

Convinced by Grandma Huo, Gong Mei Li is on the side of keeping Meng Ru Xi away from getting any opportunities that could bring Huo Ting En to preferring Meng Ru Xi over Wei Fen Qing.

“We have to help Fen Qing chase Ru Xi away. That way, our position in the family will be steady and firm.”

“I forgot my beauty care products. Can you go to my room to get them for me?”

“They are in this small bag on the table. It’ll be good if you could bring that small bag to me.”

Wei Fen Qing gone looking for her small bag of beauty care products, Huo Ting En’s mother brings Meng Ru Xi to the sauna room and tells her to take a good long soak in the bath. She takes away Meng Ru Xi’s clothes and calls Huo Ting En over with a need for him to come look at a faucet in the ladies’ sauna room that she says has a problem.

“Who’s in there? Immediately come out!”

Gong Mei Li gets Wei Fen Qing back into the sauna room. She ushers Wei Fen Qing into taking a soak in the bath then takes away her clothes. She waits outside where Huo Tian Zhi comes asking what she’s doing. She asks him to help delay Huo Ting En who’s approaching.

Wei Fen Qing is walking naked looking for her clothes when Huo Ting En, unaware, walks in. Wei Fen Qing screams and slaps Huo Ting En in the face a couple times and covers his eyes with her hands.

“Who doesn’t bring along clothes with them when they take a bath?”

“I did bring my clothes! But my clothes disappeared! Do you not get it?”

Huo Ting En sees the best action is for him to turn around and head back out. Wei Fen Qing doesn’t chance another round of being exposed to Huo Ting En. She keeps her hands on Huo Ting En’s eyes and guides him out. Huo Ting En’s mother then enters; followed by Gong Mei Li and Huo Tian Zhi. Huo Ting En is quick on his feet. He turns around, stretches out his hoodie and covers Wei Fen Qing who hides behind him.

“What are you both doing?!”

“We’re both… we’re an engaged couple taking a bath.”

Huo Ting En’s mother is not pleased by the sight before him. Gong Mei Li, however, is pleased with the outcome.

Gong Mei Li is out of the room. Huo Ting En’s mother gets forced to leave also—urged to do so by Huo Tian Zhi.

Wei Fen Qing wails from the embarrassing ordeal. The adrenaline in Huo Ting En seemingly gone, he staggers out after telling Wei Fen Qing he will exit.

“Hurry up! Find me some clothes and bring them here.”

Wei Fen Qing wants to know how much of her naked body Huo Ting En had seen.

“I probably… didn’t see anything that clearly.”

“Then that means you did see something.”

“That’s right. I saw. But the bit of something I saw isn’t something much.”

“That bit of something is my something!”

Huo Ting En in the main area of his bedroom and Wei Fen Qing still in the wardrobe, both speak aloud thoughts to themselves.

Huo Ting En’s thoughts are many—a chain of thoughts where one leads him onto the next. His first thought begins on how surprised his relationship has progressed with Wei Fen Qing, where in the short amount of time that he’s known Wei Fen Qing, she has gone from being a stranger to his wife. His thoughts then moves onto the kiss. He reflects on his actions to have been incorrect. He tells himself he can like someone without acting on it and kissing them. He moves onto a curiosity to know what Wei Fen Qing’s answer is to his confession and wondering if he’s better than Ah Wei.

Huo Ting En then admits he had seen everything in the sauna room. ‘A little bit thin’, he says Wei Fen Qing was; then wonders about what he’d feed her to fatten her up. His thoughts move onto the sleeping arrangement they’ll have.

“I won’t force Wei Fen Qing to do what she doesn’t want to do. If she wants to leave, I won’t force her to stay. Let her make the decision herself.”

Ah Wei comes running to find Wei Fen Qing, wishing to understand what had brought her to become Huo Ting En’s fiancée. Prior to this time, Ah Wei had been seen preoccupied as he ran his stall, pretending to be his normal self. He was then seen unable to contain the sadness from doing so much for Wei Fen Qing, but still not able to be in her heart when he found the beans that Wei Fen Qing spilt onto the floor during when he accompanied her after her accident.

“Do you want to sleep on the bed tonight? If you’re scared of the dark, I can give you my hand to hold. You’re an adult now. You should learn to sleep with the lights off.”

“My bed is very big. We can sleep apart. I assure you I won’t do anything to you.”

Huo Ting En goes onto telling Wei Fen Qing about how he cut his finger in art class whilst making a bamboo-copter, revealing the nickname his mother gave him—’En En’. Wei Fen Qing found it a funny nickname because it sounded like straining in the toilet.

Grandma Huo reveals she is aware of the act Huo Ting En and Wei Fen Qing is putting on to stop Huo Ting En’s mother from matchmaking Huo Ting En. She doesn’t care one bit that it is an act.

“When Ting En came home that day, he said, ‘This is my fiancée.’ At that time, it really didn’t occur to me. This is fate, isn’t it? Of course, I knew that those two kids were putting on a show.”

“I wanted to use this opportunity to get them together. Shu Feng, surprisingly, gave her permission. She agreed. She helped the two. She allowed Fen Qing to move into our home to take care of Ting En. So long as she agrees. Even if I have to pay it with all of Yanis to bring the two together, I will!”

There seemingly is a connection between the Huo family and Wei family. During the scene where Grandma Huo made a visit to see Wei Fen Qing’s mother, Shu Feng, to propose marriage and seek permission to allow Wei Fen Qing to move in to live at the Huo residence, we’re informed it has been twenty years since they last seen each other. Wei Fen Qing’s father was told to have been a worker at the Huo family restaurant as well.

The episode ends with Huo Ting En’s mother coming into the room to find Wei Fen Qing tied to the bed and Huo Ting En popping up from underneath the covers with paper stuffed in his nostrils. The night was a rough one for Huo Ting En with him again having to deal with Wei Fen Qing’s odd sleeping habits that saw him being kicked around.

Huo Ting En’s mother came into the room to have Wei Fen Qing up and out of bed in five minutes for a competition against Meng Ru Xi. It’s to compete for the right to be daughter-in-law of the Huo family. It’s a test of skills the other is weak in.

We loved Gong Mei Li going against Huo Ting En’s mother in this episode! She was the mean one in all the flashbacks where she made things difficult for Huo Ting En. But now, she’s on the good side!

“Bathe bathe!” She said. Huo Tian Zhi’s reaction to his mother’s frenzied shout says how out-of-her-character it was. So funny! Who knew she was actually not going to be a problem for Huo Ting En and Wei Fen Qing?? We’ll be looking forward to seeing more of Gong Mei Li in action!