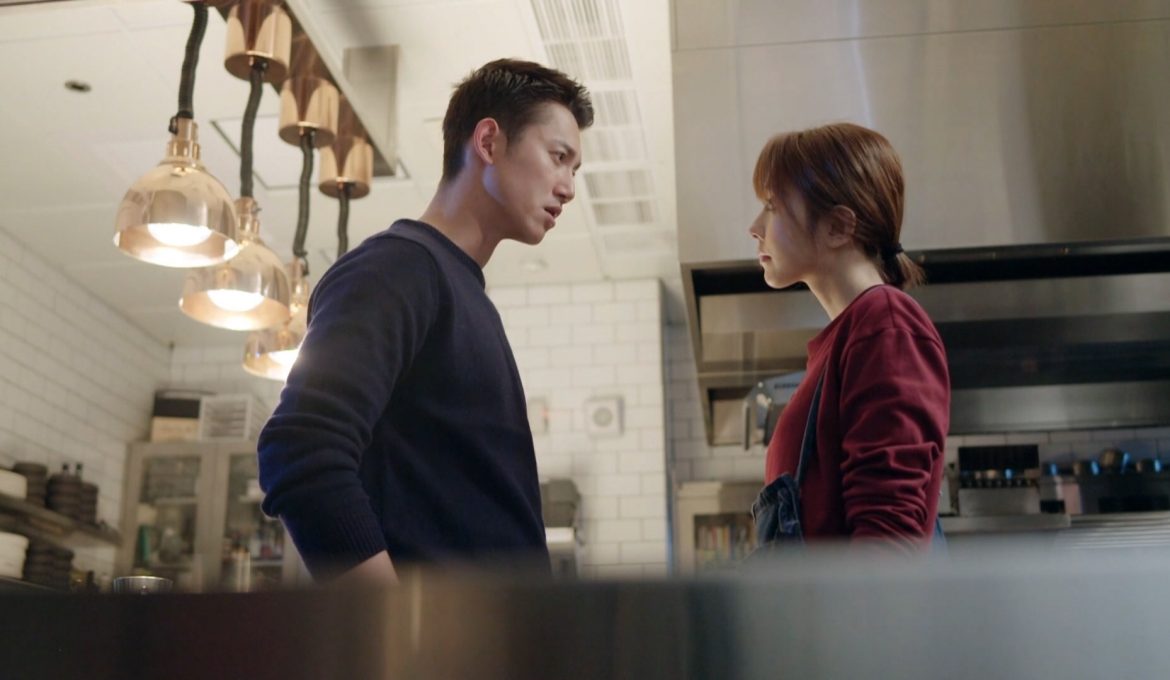 The first episode started off showing what’s typical of a cooking drama. It showed beautiful slow-motion close-up shots of food being prepared and food being cooked.

The setup is the male lead character being the super talented and young chef who is a general manager of a top restaurant chain. He’s highly regarded in the world of cuisine. He’s harsh with his words when it comes to judging food. Meanwhile, the female lead character is the amateur cook who has rather impressive talents in cooking, but fall short of being a master chef like the male lead character. She uses the cooking talent she has in a food stall in the street markets.

In the first few minutes of the first episode, we were wondering if we might be seeing another ‘just okay’ cooking drama because there were these typical things. But then we began to feel that the story had something more than just a drama about a master chef and an amateur cook. By the time the episode ended, we were very happy to have the next episode come!

We really enjoyed the arrogant, but playful character, Huo Ting En, that Wu Kang Ren plays. Arrogant and playful are always a good combination! This kind of a male lead character works well with a spunky female lead character like Wei Fen Qing—to which Ivy Shao plays. She’s not the type of spunky that is mouthy, loud and reacts before thinking. She’s the type that is level-headed. Wei Fen Qing is a good sport towards Huo Ting En’s blunt, arrogant and playful person. These two type of characters are then really fun to watch!

The first episode developed an interesting backstory that has brought Huo Ting En to notice Wei Fen Qing. And there’s the interesting female love rival character who is beautiful, feminine and appears to be the type where she’s always the one to decide whether the guy is good enough to be accepted by her. She’ll be chasing this time no doubt. Not too sure if she’s going to get into some foul play to get the guy she wants, though. Too early to say.

Huo Ting En becomes frozen in his steps when he first spots Wei Fen Qing at her food stall. He’s reminded of a someone in his past.

We learn a little bit about this someone in Huo Ting En’s past during this trance and a bit more scenes later when Huo Ting En is home at night, sitting by the window thinking about her again. She is called Ting Li—a sweet-looking girl who addresses Huo Ting En as Older Brother. She worked hard at her food stall for what seemed to be to support her boyfriend. But business was bad. Her curry making skills wasn’t good enough. Huo Ting En seems to regret his past actions towards how he spoke and handled the situation with Ting Li. He speaks of protecting her and mum. If only she had come home, he could’ve protected her and mum.

Huo Ting En gets broken out from his trance by Ah Wei (Ben Wu)—someone who works next door to Wei Fen Qing selling chicken cutlets. He’s a guy who’s popular with the females and (we feel) he’s someone who’s quite inclined towards Wei Fen Qing. Ah Wei asks Huo Ting En to move aside for customers behind him if he doesn’t want to buy their Curry Shrimp Mini Burger.

Huo Ting En quickly orders two. His opinion and reaction towards Wei Fen Qing’s Curry Shrimp Mini Burger offends Wei Fen Qing. Even after Peng Xiao Bin introduces Wei Fen Qing to Huo Ting En as the highly regarded chef in the cuisine world Wei Fen Qing isn’t impressed. Huo Ting En’s opinion of the taste of her Curry Shrimp Mini Burger is that it’s night market food quality and has a sour taste to it. Her ability to sell this substandard food to the public is through using his name. Wei Fen Qing throws him back an argument of her curry food item is made with average-priced ingredients that make it affordable (implying his dish is only better because it’s made with high-quality ingredients). Also, she argues that her many hundred thousand online fans from all over the country proves there’s nothing wrong with the way she made it.

Huo Ting En proves how lacking her cooking technique is when he goes and makes the food item with the same ingredients she used in her curry shrimp mini burger. Wei Fen Qing admits defeat after she tastes his version. The shrimp is crunchier, it’s refreshing and has lasting aroma. This weighs on Wei Fen Qing’s mind many hours later, up till bed time and through to the next day when she goes to his restaurant to redeem herself by way of proposing to make his signature Curry Lobster dish.

Wei Fen Qing admits she wasn’t able to make his signature Curry Lobster dish to taste exactly in the way his did. Her response to her defeat is persistence, however. She asks Huo Ting En to teach her how to make the dish. With confidence towards her tasting abilities and cooking ability, she tells him she can succeed in making his curry lobster in seven days if he teaches her. The regret that Huo Ting En seem to have towards his past actions towards Ting Li, as well as Wei Fen Qing seemingly reminding him of Ting Li, seems to be factors in his decision to agree to teach Wei Fen Qing how to make his signature dish—a dish which requires a cooking technique that takes 3 – 5 years to master.

Wei Fen Qing must first show him she has the skills of a good chef first. Huo Ting En tests to see if she’s got stamina. He gets her to bring in the inventory in ten minutes. It’s another challenge Wei Fen Qing takes on: five minutes, she says. That’s all the time she needs to move the inventory into the kitchen. She has no trouble with the first few bags, but she struggles as she gets along. Wei Fen Qing surprises Huo Ting En and Peng Xiao Bing with her strength, nonetheless. She also surprises them with the fact that she manages to complete the task within the time she said she would. She completes the task with 15 seconds to spare.

Huo Ting En next tests Wei Fen Qing’s tasting abilities. He gets Wei Fen Qing to sample ten different curries with her eyes closed. He then gets her to arrange the pottle of curries on the table that he has mixed up in the order she sampled them. She has 30 seconds.

Ten seconds in, Wei Fen Qing warns of an earthquake about to occur. The warning has Huo Ting En accuse Wei Feng Qing of using it as an excuse to not complete the task he gave her.

But Wei Fen Qing wasn’t making an excuse to get out of completing the task. The lighting fixtures begins to swing. Huo Ting En is alarmed and is quick to make a move around the table and towards the exit of the kitchen. She calls Huo Ting En up on his quick reaction to the earthquake as him having a fear of earthquakes. However, that isn’t why he moved so quickly. As Huo Ting En begins to say what it was that made him move so quickly, the power suddenly cuts off. While Huo Ting En looks up and around complaining about this second inconvenience that has occurred in a span of a few moments, Wei Fen Qing’s face slowly turns scared and her person slowly disappears below the table. Huo Ting En suddenly becomes alarmed. We see Wei Fen Qing has clutched his leg. This action of Wei Fen Qing’s has Huo Ting En try to get her to let go of him: he’s clutching the table for strength as he tries to take steps to get Wei Fen Qing to loosen her hold on him. But her hold is too strong. One clutch followed by another clutch, Wei Fen Qing slowly makes her way up to clutching Huo Ting En at his torso.

When Wei Fen Qing’s fear-filled eyes stare up at Huo Ting En after he asked her if she was scared of the dark, he helps Wei Fen Qing with the situation by giving her his cell phone with the flashlight function on. Wei Fen Qing is a little less scared and Huo Ting En is able to get himself free from her hold. He makes a quick check of Wei Fen Qing to see if she’s okay before he goes to turn on (we think) the backup power.

The episode ends with Huo Ting En looking around for his cell phone the next day after getting a call from Peng Xiao Bin about inventory coming in. He realises Wei Fen Qing has it after recalling he had given it to her the previous night to help her out with her fear of the dark. When he goes to call his cell phone, he hears an alarmed voice yelling, “Save me!”