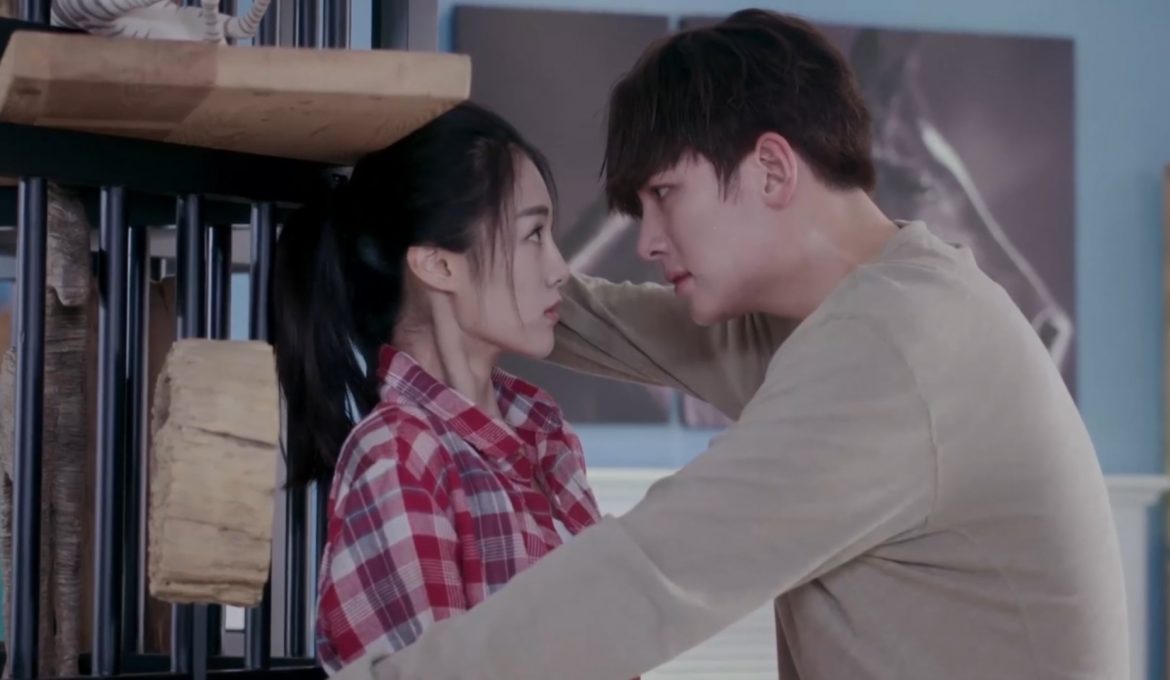 What a surprise to find Chang An confessing to Qi Bai Cao in this episode! It comes out in the heat of the moment when Qi Bai Cao entered Chang An’s place after hearing a sound like utensils knocked to the floor and she finds him on the floor with a swollen knee joint Chang An was in excruciating pain and frustrated with Qi Bai Cao because she was concerning herself with him and his knee when she’s Fang Ting Hao’s girlfriend.

Chang An had found out about this relationship change between Fang Ting Hao and Qi Bai Cao through Fang Ting Hao, himself.

Fang Ting Hao had come visiting Song Bai after discharging himself from the hospital. At the time he comes visiting, Qi Bai Cao, along with Hu Yi Feng and Fan Xiao Ying, were training for the Three Person Competition in Singapore. He finds Qi Bai Cao training with Chang An. The sight of her being supported by Chang An as she trains at first doesn’t make Fang Ting Hao concerned. He just recalls the many past actions of Chang An’s—saving her from drowning in the pool, carrying her to their room in Tokyo and the embrace he saw Qi Bai Cao give to Chang An after winning third place in the Tokyo competition. Fang Ting Hao admits he had misunderstood Chang An after an investigation he had asked his assistant to carry out made him see Chang An had not caused the death of his friend, Xing Yao, but a medical condition had. He realises Chang An had known about this and had tried to stop Xing Yao from training.

But then, Fang Ting Hao sees the sight of Qi Bai Cao embraced by Chang An. Qi Bai Cao seems to have moved in a way that made her unsteady and Chang An steadied her in his arms. This is when Fang Ting Hao lets Chang An know Qi Bai Cao is his girlfriend: he heads into the scene, brings Qi Bai Cao to stand next to him and casually slips in this fact to Chang An.

Fang Ting Hao continues this role of being Qi Bai Cao’s boyfriend with helping her with chores and tasks—mopping, washing, bringing food he made for her and the others—all of which Chang An sees and they build up to Chang An’s confession.

This confession was quite intense. Chang An looks intimidating when he demands Qi Bai Cao to explain herself with this title as Fang Ting Hao’s girlfriend. He makes Qi Bai Cao walk backwards and then traps her between him and the display unit behind. He didn’t look as forceful as Fang Ting Hao when he confessed some episodes ago, but it’s similar.

We quite like the line that Chang An says leading up to the confession as well. It came across as Chang An’s way of wanting Qi Bai Cao to tell him why she is being so concerned about him if she’s seeing him as just her instructor. Chang An said, “From Feng Yun to Song Bai, I’ve taught so many disciples. I’m an instructor to a lot of people. Who am I to you? What right do you have to concern yourself with me?”

This stumped Qi Bai Cao. Seeing Qi Bai Cao stumped at least lets us know that it’s not as simple as Chang An being her instructor.

There was an earlier moment showing us she does pay close attention to Chang An. She noticed Chang An holding his knee that nobody else saw after their training.

But it seems Qi Bai Cao still isn’t at the point of knowing her thoughts and feelings towards Chang An. Chang An’s confession seemed to not have received an answer. The following scene showed Qi Bai Cao in her room reflecting back and thinking on the confession. But, at least she’s not shown to have rejected him.

Following this, it’s a scene of Qi Bai Cao, Fan Xiao Ying, Hu Yi Feng and Chang An about to leave to head to Singapore for the Three Person Competition. As Fang Ting Hao goes to whisper words in Qi Bai Cao’s ear about what moments he’d appreciate her missing him whilst she’s in Singapore (he’d be happy if she thinks about missing him during her downtime and okay that she doesn’t think about missing him when she’s busy), Qi Bai Cao shows she’s paying attention to Chang An again when she sees Chang An’s dissatisfaction and slightly snaps her ear away from Fang Ting Hao.

Chang An’s reaction to seeing Fang Ting Hao whispering in Qi Bai Cao’s ear is really cute! We like it so much we turned it into an animated gif! He really doesn’t hide his jealousy or dislike in this one.

Chang An is uncertain about whether he should carve this additional figure of himself to complete the gift he gave to Qi Bai Cao.

The episode concludes with Qi Bai Cao, Fan Xiao Ying, Hu Yi Feng and Chang An in Singapore for the Three Person Competition that Lu Fei Yu invited them to participate in.

Hu Yi Feng hasn’t been in the story much. He was seen in Episode 1 (we think he only appeared in Episode 1 before disappearing) and then just recently came back in. It feels like the purpose of the Hu Yi Feng character coming back in is to be included in the team going in to compete in the Three Person Competition. Unlike Fang Xiao Ying who had to go through a selection process to be selected, but like Qi Bai Cao, he automatically got selected by Chang An to go into the team participating in the competition. Hu Yi Feng was explained to be one of the strongest in the group; but, we do wonder why he makes his appearance at this point in the series when he has been missing in action for quite a long time with the explanation of him being overseas meeting their hall master. He can’t simply be coming in for the development of the love triangle.