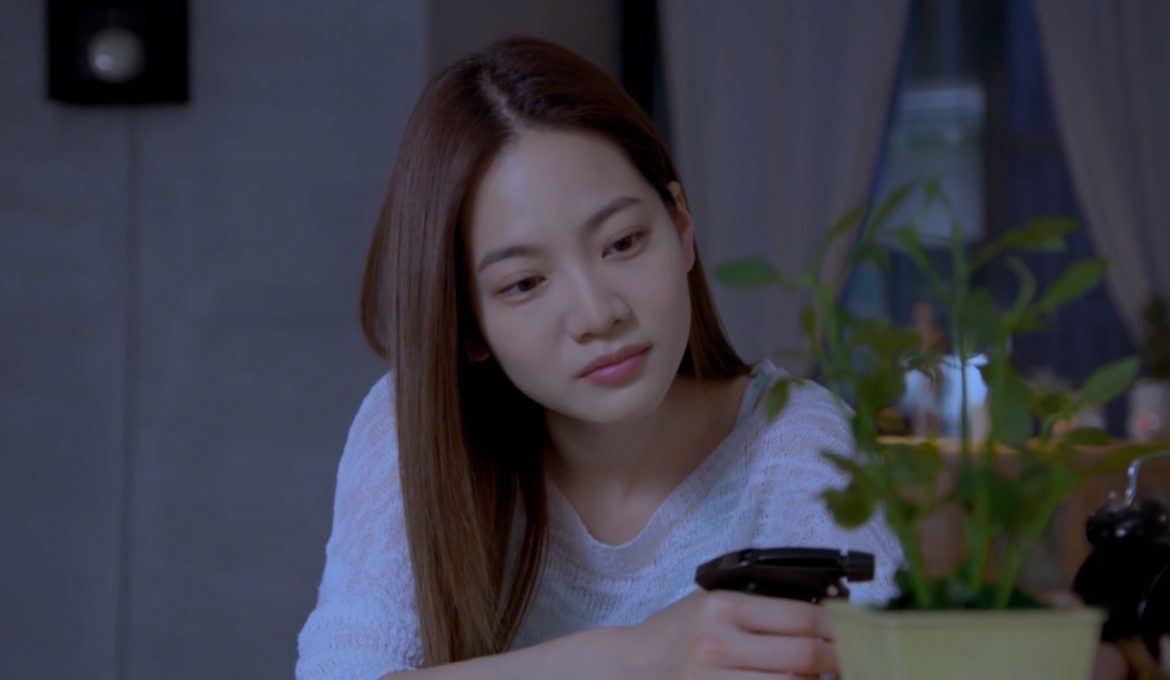 With the help of Meng He who hurries her colleagues along after she catches onto Ji Wen Kai’s call for assistance, Ji Wen Kai is able to escape further curiosity from Sales Team 3 of his strange behaviour of eating two ice cream cones and taking a stroll alone.

Leaving Ji Wen Kai, coincidentally, Sales Team 3 come to the location where Zhong Yu Tang waits for Ji Wen Kai to return with the ice cream she had wanted him to get for her. Like Ji Wen Kai, Zhong Yu Tang struggles to answer her colleagues’ curiosity of what she was doing here after having told them she couldn’t join them because she had to work at her eatery.

Zhong Yu Tang’s colleagues find her answer unusual when she tells them she’s out alone taking a walk. They repeat her answer in a questioning tone. Again, Meng He helps Zhong Yu Tang out: she’s hungry to the point of her blood sugar levels being low. Meng He also helps Zhong Yu Tang decline their invitation for her to join them for a meal with she comes up with an excuse for Zhong Yu Tang of having already eaten before coming out.

Zhong Yu Tang’s colleagues leave. But ultimately, Zhong Yu Tang and Ji Wen Kai get caught. Meng He hadn’t managed to get them away completely and even Meng He joins her workmates in spying on the two from a distance, watching Zhong Yu Tang take a bite of the half-eaten ice cream cone Ji Wen Kai holds out for her to eat as Ji Wen Kai eats from his own.

Ji Wen Kai attempts to calm his subordinates down: he tells them the day they kissed isn’t important and begins telling them what was important. But, Zhu Liang Yu interrupts Ji Wen Kai and begins speaking aloud of the words he types on his laptop of a romance storyline about a prominent CEO and a lowly Refresh Man salesperson who become close with one another through initially being at odds with each other. Zhu Liang Yu’s colleagues join in. They go on a train of fanciful thoughts of an epic romance love story. But Ji Wen Kai bursts this epic romantic love story of theirs when he tells them that he and Zhong Yu Tang had actually known each other since high school. Ji Wen Kai also appears to follow with telling Sales Team 3 the relationship they had in high school when a montage of the familiar scenes of Ji Wen Kai and Zhong Yu Tang in high school appears on the screen.

Ji Wen Kai and Zhong Yu Tang’s day out with each other ends with a quiet walk and a chat about the relief of not having to hide their relationship from Sales Team 3. We also see Zhong Yu Tang purchasing a pot of roses from a side road stall that they come across on their walk.

Wang Zi Yu is back. He is now a General Manager of Shinway Biotechnologies after—what Wang Zi Yu reveals to have been—recognition from his father and the employees. After his meeting with Ji Wen Kai, Miao Ai Sha and Sales Team 1—one revealing a new product of Shinway Biotechnologies—Wang Zi Yu meets up with Zhong Yu Tang. The meeting is one where Wang Zi Yu wishes to resume and finish saying the things he had wanted to say to Zhong Yu Tang that he wasn’t able to complete that night Ji Wen Kai took Zhong Yu Tang away from him. “Please believe me. I will do my utmost best to give you happiness. I won’t let you get hurt at all. I won’t let you suffer one bit, whatsoever. I only want to hold you firmly in my heart and cherish you. Can you give me this chance?”

The conversation ends when Zhong Yu Tang gets a phone call from Meng He requiring her to return back to the office to attend a meeting with Sales Team 1 and Ji Wen Kai. Before Zhong Yu Tang leaves, Wang Zi Yu asks her whether she knew something about nutritional supplements. He needs to find a gift for someone retiring in the company. The question has Zhong Yu Tang uncertain about how to respond. It takes Wang Zi Yu to indicate that the relationship they have with each other now is friends that Zhong Yu Tang tells Wang Zi Yu she will make plans with him in a couple of days to help him out with the gift.

Sales Team 3 and Sales Team 1 come face to face before their meeting with their CEO. Sales Team 3 reveals sales figures of new Mei Mei to Sales Team 1: they are well on their way to reaching the target of selling 300 million dollars of the product with under 4 million left to reach the total. Manager Jia of Sales Team 1 isn’t concerned with the rapid sales of their Mei Mei product. He tells Sales Team 3 the rate of sales will be difficult to sustain with the number of consumers buying the product at its peak. They won’t make another purchase for a long while—one beyond the deadline of their bet when they must finish using the product before their next purchase. Sales Team 1 leaves Sales Team 3 thinking about this very valid point and troubling problem. But Sales Team 3 leave this matter for the meanwhile and head into the meeting room.

In this meeting, it sees Sales Team 3 report to Ji Wen Kai on the current sales figures of their new Mei Mei product. It also sees Ji Wen Kai announcing the culprit who had leaked information of Sales Team 3’s secret sales strategy that resulted in Sales Team 3 losing the contracts with the customers they managed to grab. Showing a security camera footage, Ji Wen Kai reveals the culprit to be a member of Sales Team 1. Manager Jia is unaware of this disgraceful act his subordinate carried out. As the subordinate pleas for Manager Jia to listen to him, Manager Jia pushes his subordinate out of his seat and out of the meeting room, calling him scum and a disgrace to Sales Team 1. Ji Wen Kai tells Manager Jia he also has responsibility for the disgraceful act his subordinate carried out. However, he will give him the chance to make up for his mistakes with performing better in selling the new product that Wang Zi Yu introduced to them earlier.

After this talk, Sales Team 3 get down to coming up with ways to get new customers. Huang Jia Yin suggests expanding to the overseas market. Her Sales Team 3 colleagues are unsure there is enough time to make it possible. Huang Jia Yin, however, explains the idea is possible when a meeting she had at lunchtime with Ji Wen Kai about representing Sales Team 3 at a beauty care products expo in Singapore provides them the opportunity.

Zhong Yu Tang moves onto another topic about the past after this topic comes to an end. It’s one she has been shown to wonder about for some time: why did you suddenly disappear 10 years ago?

Yes, we wonder that as well. Why did Ji Wen Kai suddenly disappear? What was told so far was that things went down hill for Zhong Yu Tang and Ji Wen Kai since the event of the school dance. There was the swimming pool fight with the popular guy then discipline in the faculty office. We are then told Ji Wen Kai had to follow his dad overseas. It wasn’t told why Ji Wen Kai had to go overseas. No clues to whether these events are related, either. We think that it’s simply that Ji Wen Kai had to go overseas because his dad had to. But, with it being a cliffhanger and how Ji Wen Kai’s expression looks uncertain about how to answer, it feels like it has something to do with Zhong Yu Tang… Not sure. But it just occurred to us that the drama has not given any information on Ji Wen Kai’s background. We only know that he was a delinquent in high school—or rather, acted like he was one. There’s nothing to go on, so we are very curious what the reason is that he had to go overseas with his father.

It looks like the drama is going to use the guilt Ji Wen Kai feels about being the person Zhong Yu Tang’s mother’s last actions was for. The hand that Zhong Yu Tang removed from Ji Wen Kai’s hold when he was about to reveal the information is making it look like Zhong Yu Tang might become very agitated with the information, so it could cause a rift between them… possibly… unless the action is just for the immediate situation and it won’t carry through. We feel there’s not much that can come from this guilt of Ji Wen Kai even if it gets developed when it’s not really Ji Wen Kai’s fault. It’s Zhong Yu Tang’s mother’s own desire that she chose to head out and make omelette for him. Logically, Zhong Yu Tang shouldn’t get angry or put the blame on Ji Wen Kai.

We didn’t find anything useful in the scenes that resulted from the cliffhanger of the last episode. It was a replay of information we already knew—gossipy information that isn’t all that exciting to hear the characters become excited about. We didn’t think anything great would come from a mundane plot like “Who is Zhong Yu Tang dating?” but we are still disappointed to have come to a scene of Sales Team 3 extremely fascinated with knowing when Ji Wen Kai and Zhong Yu Tang got together and when they kissed. Even if such a reaction is realistic, it’s unimpressive and not interesting. This small plot in the series should have not been focused on from the start in our opinion. The end result didn’t do much to build up to anything fun or exciting.

Wang Zi Yu’s change of title was sudden. It makes us wonder why it is important that Wang Zi Yu is given a change of title in the story at this point. We’d think it’s not just for vanity’s sake or is a crude attempt to give character development to Wang Zi Yu’s character when there was a mention of directors in his company retiring during the scene between Zhong Yu Tang and Miao Ai Sha near the end of the episode. We’re not sure how directors told to be all leaving means for plot, though. It’s another stand-alone and disconnected development that we guess we will have to wait and see if anything comes from it.

The way Refresh Man has been very unimpressive with how they move their plot with choices of situations that are so far very trivial and mundane, and with how they simply resolve these situations that are so trivial and mundane, we don’t have much expectation for this drama to develop well at this point. The world and the characters have been feeling like they simply exist to promote the real life products that are a major feature in this drama. We don’t mind that products are being promoted. All dramas have product placements. Refresh Man, though, it doesn’t feel like it’s a drama with product placements. With the 13 episodes so far, Refresh Man has been looking like a 13-episode infomercial for the products that feature in the series. It’s an infomercial in disguise of a drama. Even if Refresh Man is simply a drama to promote the products, we still would like to see attention and care to be given to creating a story that isn’t so choppy and filled with uninteresting developments.