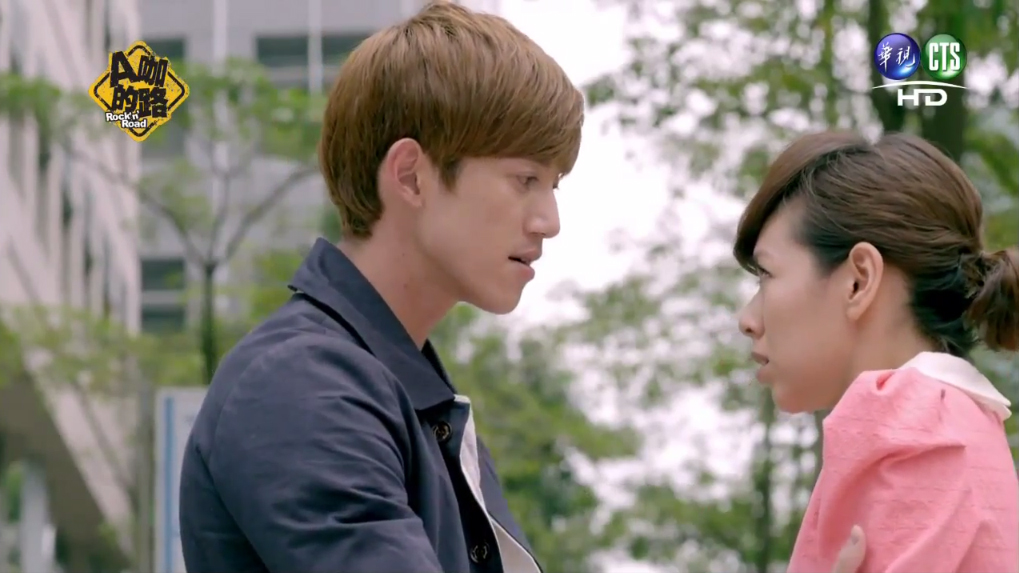 This scene leads up to a major scene happening between Zhou Shu Yu and Lin Wei Zhen in Episode 11. It was a very awesome scene. This comes after the countryside road tour that had a sour encounter with one of Zhou Shu Yu‘s longtime fans (who became an ex-fan before becoming his fan again because Zhou Shu Yu scolded her for flaming Lin Wei Zhen, but comes to be his fan again at their last gig). It caused Lin Wei Zhen to feel guilt for dragging him down with her and tiring out her friends. The scene comes immediately after the live interview that Zhou Shu Yu and Lin Wei Zhen does to promote the album; however, the interview turns into one to embarrass Zhou Shu Yu when he is asked to kiss 10 guys with the offer to purchase copies if he takes on the task. Of course, Zhou Shu Yu does take on the task. Lin Wei Zhen doesn’t allow Zhou Shu Yu take on the task and lose more of the reputation he has already lost since choosing to help her with her dream. She stops the interview, runs out of the studio and into the street where Zhou Shu Yu chases her down and tries to stop her from giving up.

This scene leads up to the major scene of (we’re about to spoil this scene, so don’t read further if you still have yet to catch up with Episode 11 or haven’t seen the previews for this episode!) Zhou Shu Yu revealing his feelings for Lin Wei Zhen, telling her he likes her then kisses her later on.

We extremely loved how this confession scene played out and ended. There were moments of lightheartedness filtering in between moments of seriousness; characters questioned Zhou Shu Yu‘s motive which provided uncertainty—Lin Wei Zhen thought it was to coax her back into the studio to finish the interview and the host (to whom had the cameraman with him, watching on from the other side of the pedestrian crossing) accused Zhou Shu Yu to be using the same trick he used on him to get ratings (Episode 1 showed Zhou Shu Yu surprising this host with kissing him on air); and, the end to this scene returned back to being about the challenge of selling 50,001 copies. All this made a typical confession scene different, layered, entertaining and interesting.

Looking at the preview for Episode 12, the depth and sincerity of Zhou Shu Yu‘s feelings for Lin Wei Zhen may be the focus for the next episode when Yang Jia Xin enters into what have so far been Zhou Shu Yu and Lin Wei Zhen moments with no threats from Yang Jia Xin. She was shown to be very devastated and heartbroken when she saw the footage of the live broadcast of Zhou Shu Yu and Lin Wei Zhen on her phone in this episode. We know how she feels, but not yet Zhou Shu Yu. Except for the brief scene in Episode 9 where Yang Jia Xin (with Xu Li Da behind) and Zhou Shu Yu (with Lin Wei Zhen next to him) was shown staring at each other as they were slowly being separated and getting farther and farther apart by forceful groups of reporters, there hasn’t been much focus on Zhou Shu Yu‘s thoughts on Yang Jia Xin. It’s going to be very interesting to see how he’ll react when Yang Jia Xin goes to him again. We’re thinking he’s moved on, but we won’t bet on that just yet!