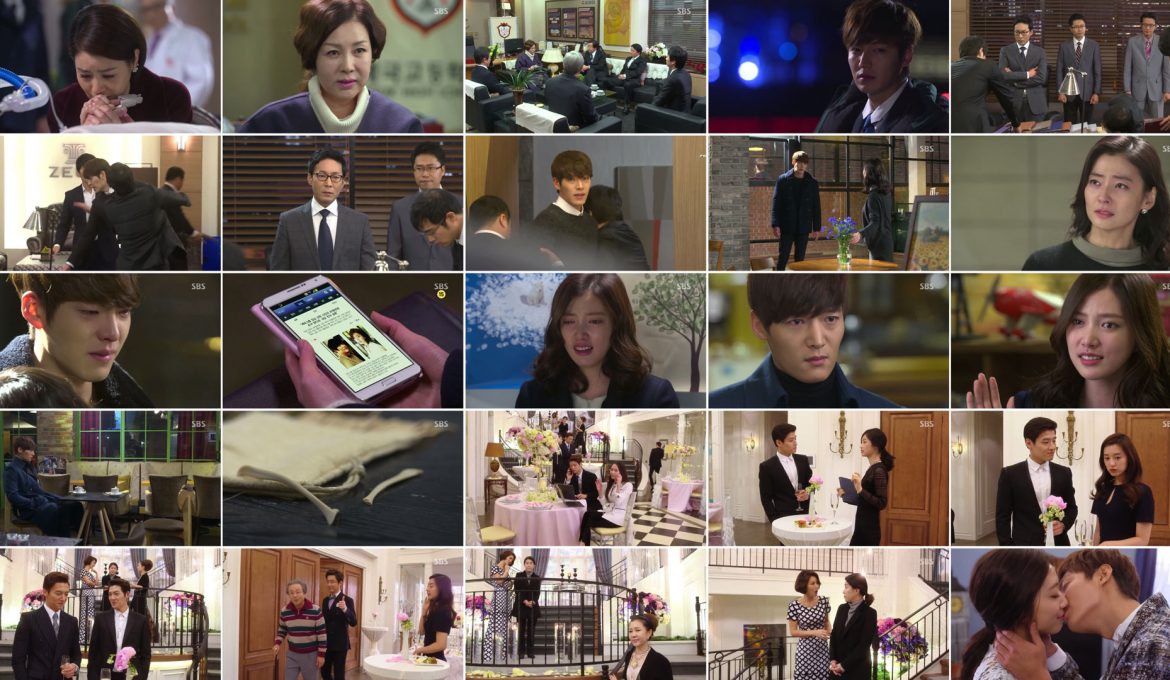 The Heirs ended off so well. It is just right. We love it. For Kim Tan (and Cha Eun Sang), it all worked out. Kim Tan‘s father (in not so many words) approved Kim Tan‘s relationship with Cha Eun Sang. He and Kim Won are working together and is no longer asked to go to America: Kim Won tells Kim Tan that although he will still be lonely whether Kim Tan is sent to America or not, it is better than not having him by his side. Kim Tan is able to openly walk arm in arm with his biological mother, Han Ki Ae.

For the majority of the main characters, Kim Won, Choi Young Do, Yoo Rachel and Lee Hyo Shin, the weight of being an heir to empires and conglomerates remains heavily on them.

Kim Won, after successfully defending his father’s position as chairman (Jeong Ji Suk had attempted to get the board to dismiss Kim Nam Yoon as chairman after he fell into a coma for a short time), he achieves his goal to hold onto his seat at Jeguk Group. He no longer fear being challenged by others within and outside the family. However, he does so at the expense of losing his girlfriend, Jeon Hyun Joo, as he enters into an arranged marriage. His final scene is heart-breaking as it is the first time we see him break into tears.

Choi Young Do, we feel for. His father is found to be guilty of tax evasion and there is a warrant for his father’s arrest. He does not have to worry about taking the helm of Zeus Hotel Group as his father’s vice president will be taking care of the company, but his family faces legal battles, media attention and there is almost certainty he will face his father being locked away in prison for a while. The light in his story, he is reunited with his mother.

Choi Young Do realises that the way he’s been living has been wrong: he makes an effort to tell Kim Tan that losing his mother was not his fault, but they fail to reconcile and become real friends. He also apologises to Moon Joon Young, the scholarship student he tormented at Jeguk High and forced him to transfer out of the school. He does not receive forgiveness from Moon Joon Young: he tells Choi Young Do that if he wants to feel sorry, he would feel guilty the rest of his life—a request Choi Young Do accepts. (Choi Young Do got quite a lot of development and screen time throughout the series. His story is so good we say the writers probably have enough material to give him a mini-episode at the end of The Heirs. Choi Young Do really is the stand-out character in The Heirs. :oD :oD.)

Yoo Rachel schedules an appointment at the neuropsychiatric department. After her engagement to Kim Tan was broken, she’s found it difficult to sleep. She had genuine feelings for Kim Tan.

Lee Hyo Shin, to escape the pressures of his mother to become a lawyer, he enlists in the army to do his mandatory service.

The final scene of The Heirs shows a world 10 years on which Kim Tan wishes it to become. It is a world where everyone Kim Tan knows is happy. Though this future is not certain, it is implied that it will be, because when Kim Tan dreams or wishes it, it becomes so.

The Heirs has a good balance of happy and not-so-happy endings. It worked well to get through the main focus of the story—hardships and challenges the heirs of the business world endures—as well as the theme of actively going after your dreams.

We probably won’t watch The Heirs through again; but not because it’s a bad series—far from it. We’re just happy with watching it once.

If you have yet to watch The Heirs even once, we recommend watching it because it is a very good series. It is well-written, well-paced and well-planned. There are a lot of characters to get used to, but they all play a part in the series. It is the characters and their stories that is the most interesting. Love the characters. Love the entire cast and their performances. Highly recommended watch!