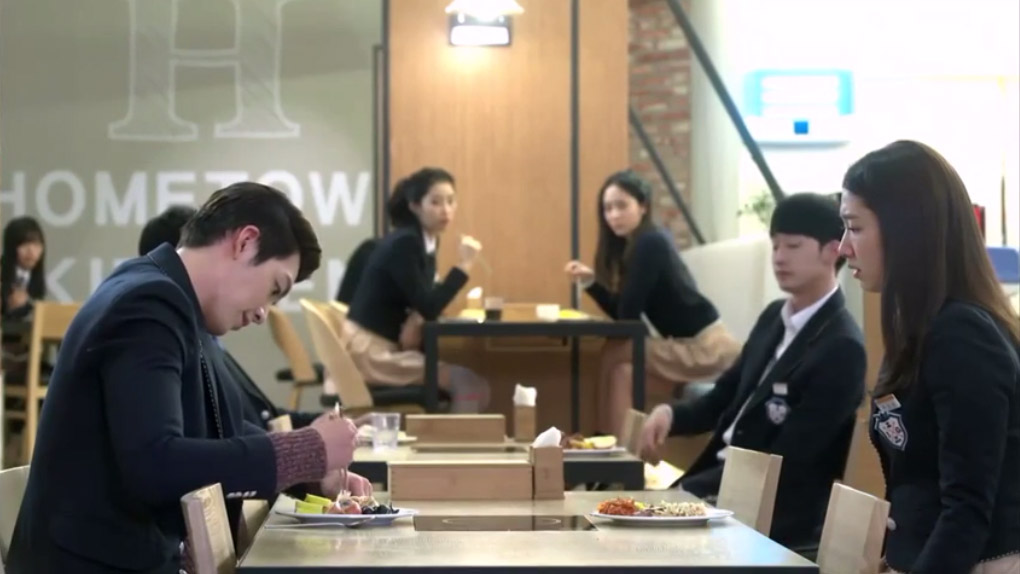 Social classes cannot mix. The theme has finally made an appearance. The intention behind Kim Nam Yoon transferring Cha Eun Sang to Empire High is not to thank her mother for the years of excellent work, but to let her see and hear through the mouths of the school’s populace how she and Kim Tan are very different and can never work long term.

Cha Eun Sang has always known this and once again refuses to acknowledge Kim Tan‘s feelings after his confession, telling him they are different people. They had an interesting way of getting this across. Where Kim Tan was able to ignore a call from his Dad, Cha Eun Sang expressed that she had no choice in whether to pick up a call from his mother or not. When he took the phone from her, she explained to him the importance of the phone: she needed it to make calls for her part time job, it was expensive and was still on a contract period, she used it to text her mother. Family, work and money were concerns of hers. Things that he didn’t really hold too important. That one outburst about the cellphone said a lot about the very different lives they led.

Before picking up the phone, Kim Tan told her that their differences could be reduced. We’re not sure what that meant, but the typical meaning would be he’d do something so that they would work and be accepted? A few scenes later, after informing Yoo Rachel that he likes Cha Eun Sang and after Yoo Rachel tells him he and Cha Eun Sang would never work even if she took herself out (because he’d just be set up with another girl from some rich family), Kim Tan mentions about allowing him to take a ‘detour’. He tells her that he didn’t want to have to ‘climb’ over her (like an obstacle he must overcome), he was just going to not think and just do for the moment. We’re not sure if the English translation was a little off, but the words ‘detour’, ‘not think’ and ‘just do for the moment’ doesn’t sound too assuring for Cha Eun Sang if she were to let go and accept Kim Tan‘s feelings!

Kim Tan is seen less respectful of his father in this episode. He does not acknowledge his father’s second wife as his mother retorting that the partner (the mistress) he lets stay in the house is his mother. With his mother ‘getting along’ so well with Cha Eun Sang‘s mother, maybe we’ll see his mother support the relationship? Maybe?

Choi Young Do appears to actually like Cha Eun Sang. Kim Tan sort of confirmed it as well. In not so many words, he confirms that Choi Young Do‘s behaviour was not because it was to show him up, but he genuinely wanted to see her. There were two times he tried to have her accompany him in this episode. He waited for her at the café she worked at and then invited (more like forced) her to have lunch with him at the school cafeteria. Both times he was interrupted by Kim Tan, where the second time it ended in a heated confrontation between him and Kim Tan with Cha Eun Sang caught in between them. We have this feeling that had Kim Tan not turned up, if Yoo Rachel didn’t ask Choi Young Do to take care of Cha Eun Sang (in the negative sense), Choi Young Do might not have been seen in as bad of a light as how he has been. At the cafe, Choi Young Do was pretty calm and was even letting her in on his inner thoughts for visiting her: he felt alone (Choi Young Do‘s existence sounded so much like Kim Tan‘s); and at the cafeteria, she was made to sit down in the chair he usually made people he bullies sit, but the difference is, the table was not occupied by the rest of the bullies: it was only him and her. Choi Young Do had only one friend with him, but he chose to sit at a distance from them at another table.