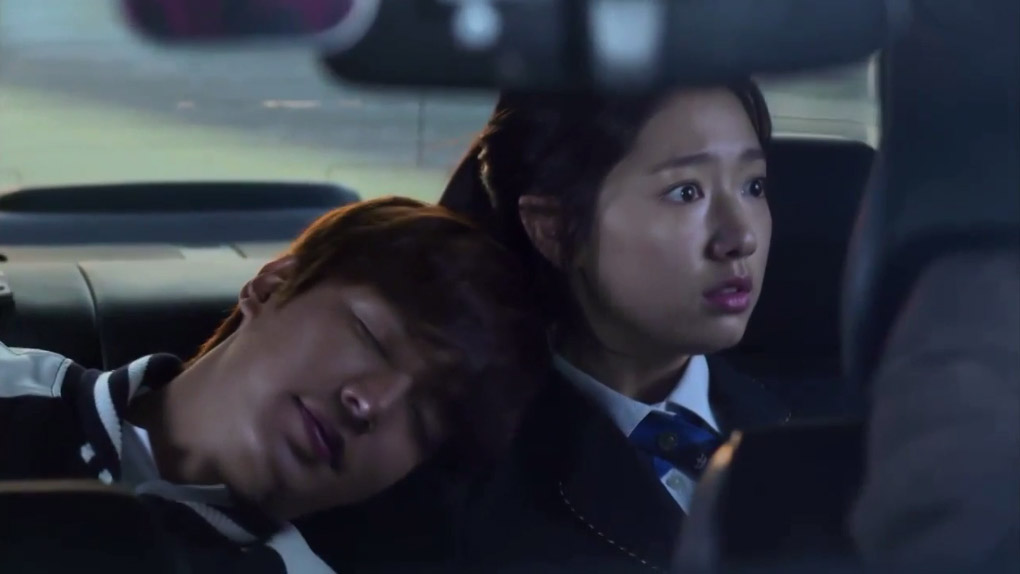 We just love the Park Hee Nam and Han Ki Ae (Cha Eun Sang‘s mother and Kim Tan‘s mother) scenes. Han Ki Ae is once again caught off guard by Park Hee Nam. On all fours Park Hee Nam is wiping the floor and backs into the room and overhears Han Ki Ae and her friend discussing a plan to get the chairman on side with her and not with the second wife. Trying to stop Park Hee Nam from leaking the information, Han Ki Ae sneaks up behind Park Hee Nam in the kitchen, hands poised around the housekeeper’s neck. Park Hee Nam turns around before Han Ki Nam can lay a hand on her. (Park Hee Nam had seen her approach through a reflection in front of her.)

Park Hee Nam and Han Ki Ae, they don’t appear to be a real threat to each other in the story. They are definitely to provide some comedy in the series more than actually cause too many problems within The Heirs world (at least not for the moment) as the scenes always have a comedic tone to them. We like how these two happen to be the mothers of the main couple in the series. It should be interesting between the two when they find out about Kim Tan liking Cha Eun Sang.

Cha Eun Sang got her expensive school uniform finally, thanks to her mother who bought it for her. She confesses that she really liked (and wanted?) the school uniform and broke out in tears. So happy to see her finally get something she liked and wanted so much. Hair tied up in a neat ponytail, she goes to school for the first time in the school uniform. Kim Tan seems to like the look—he did tell her he liked the look—but he appears to like the look a lot more than his words indicated. He keeps trying to mess her look up by pulling off her hair tie and roughing up the hair. We think he was trying to make her less alluring so that others won’t be looking at her the same way he does. :oP :oP.

Kim Tan is cute in this episode; he’s like a kid when he’s around Cha Eun Sang. Favourite scene: he and Cha Eun Sang are in a taxi together, on their way to school. Just to get his way and not have Cha Eun Sang get out of the car before reaching the school, he points off in the distance in a child-like manner, making her look elsewhere, and then rests his head on her shoulder, saying he’s sleepy because he woke up too early. (He had woken up especially early just to catch Cha Eun Sang who likes to leave early to avoid arriving the same time as the other students.) Lee Min Ho, he’s so entertaining to watch.

We finally find out why Choi Young Do stopped being friends with Kim Tan. He found out that Kim Tan is the son of a mistress. It’s a shame that they are now against each other because of that.

Choi Young Do is unrelenting with Cha Eun Sang. Despite having an interest in her, he still torments her and tries to rat her out to the school that she isn’t someone with money. (Maybe he has an issue with deceitful people in general? Or he just doesn’t know how to show he’s interested? Such a bad, intimidating way of getting close to the girl!)

The final part of the episode, a confession from Kim Tan to Cha Eun Sang. (It wasn’t a big surprise it happened: Kim Tan had announced to Yoon Chan Young that he was going to confess soon.)

Episode 7 was enjoyable. It had more funny moments than past episodes. Kim Tan, Choi Young Do and Cha Eun Sang as well as the extended circle of people, Yoo Rachel, Lee Bo Na and Yoon Chan Young, their stories and connections to each other are making the series quite interesting at the moment. The secondary relationship that’s developing between Kim Won and Jeon Hyun Joo, it’s quite a typical feature of Korean dramas: it is the serious and melodramatic pair. We’re not enjoying this part of The Heirs very much. Other than that, enjoying Heirs.