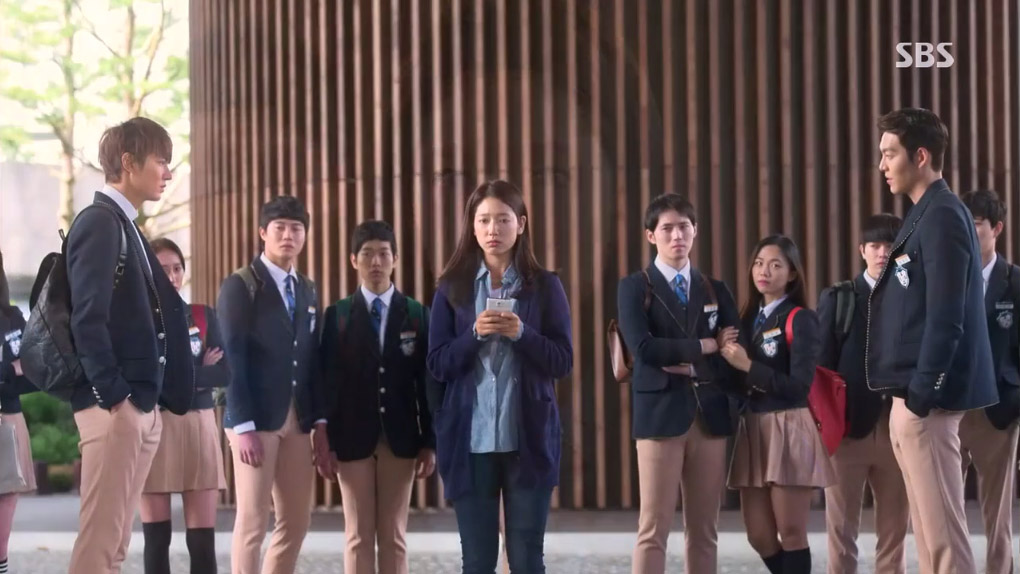 It feels like not a lot happens, but then the episode always feels like it goes by so fast, and at the end we’re frowning because it’s another week till there are more episodes! The Heirs is really good at keeping us watching, cutting at just the right point to keep us hanging for the next episode.

With Cha Eun Sang back in Korea (as well as Kim Tan), there was little excitement waiting for Cha Eun Sang to discover Kim Tan is living in the same house as she is nor was there any excitement when Kim Tan finally reveals himself to Cha Eun Sang. It must be because there hasn’t been a lot of building up of these two’s relationship.

Midway through the episode, it lost our interest quite a bit as we were introduced to another past relationship that connects everyone in The Heirs‘ world even more: Esther Lee and Yoon Jae Ho apparently have been romantically involved with each other in the past and seems to have residual feelings for each other. So Esther Lee is the mother of Yoo Rachel who remarried to Choi Dong Wook. Choi Dong Wook is Choi Young Do‘s father. Yoon Jae Ho is the father of Yoon Chan Young. Yoon Chan Young is best friends with Cha Eun Sang and the boyfriend of Lee Bo Na. Kim Tan used to date Lee Bo Na, but now he is engaged to Yoo Rachel, but he likes Cha Eun Sang. Intimately connected world The Heirs is. It really does feel like watching a soap opera!

Cha Eun Sang is made to transfer to the Empire Group High School where all the rich attends. This high school is beyond Cha Eun Sang‘s financial means, but she managed to get there through Kim Tan‘s father (if memory has it right, he wanted to use her to keep watch of her son(s), so he used the excuse/reason of wanting to thank Cha Eun Sang‘s mother for her 3 years of excellent work as a maid and offered Cha Eun Sang the opportunity to study at the high school). So, now they’re all under the same roof. The last scene is the best part of the episode.

Kim Tan and Choi Young Do are dueling it out on the courtyard (well, not really, they’re just exchanging words, but the atmosphere is a bit on the tense side) then in comes Cha Eun Sang texting on her cellphone, asking Yoon Chan Young‘s wherabouts, unaware she’s just stopped right in between the two guys and a big circle of the high school population, including her best friend, Yoon Chan Young, Lee Bo Na and Yoo Rachel. On either side of her is Kim Tan (the one that likes her) and Choi Young Do (the tormentor, but there’s clearly some curiosity in Cha Eun Sang), both looking at her. What a great way to keep us watching!