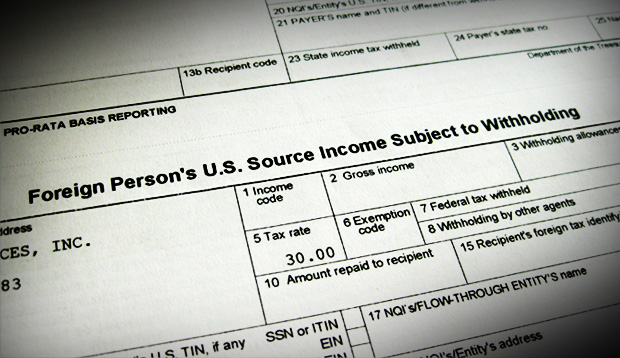 Those of us who aren’t tax residents of the United States., selling eBooks online via U.S. online stores like Amazon, Apple iBookstore, Smashwords and Createspace means 30% of non-resident withholding tax (NRWT) is deducted from earnings from sales. You can of course claim a reduced rate of withholding tax to lower the amount of tax withheld if your country has a tax treaty with the U.S. In the past, to claim this lower rate of withholding, the only route—the only mentioned route—is through U.S. tax department, Internal Revenue Service (IRS). This route is not the only way: there is the route of claiming it through your own country’s tax department; and recently, there is also the route of an online Tax Interview using your own country’s tax identification number.

Claiming Through the IRS

The traditional route of going through the IRS is not an easy one. It can be quite a process, and success first time round is not always guaranteed. Claiming the lower rate of withholding tax itself is not the difficult bit. All it takes is filling out the W-8BEN form (the Certificate of Foreign Status of Beneficial Owner for United States Tax Withholding) and sending that off to the withholding payer (i.e. Amazon, Smashwords, Createspace, etc.) to advise them that you are entitled to a reduced rate of withholding on your sales. It’s obtaining the required Individual Taxpayer Identification Number (ITIN) from the IRS to complete the W-8BEN form that can be quite a process. Making an application for an ITIN requires completing a W-7 form (Application for IRS Individual Taxpayer Identification Number) accompanied by:

1. Proof that you require an ITIN. This involves obtaining a letter from the U.S. retailer(s) that you are selling with them, and for the purpose of claiming a lower rate of withholding, the reason you require the IRS to issue you an ITIN. The problem here is that some letters provided by the online retailer have been rejected on the basis that its letterhead doesn’t meet what IRS considers an official letterhead. (In the past, Amazon.com’s letters have been known to fail requirements and subsequently rejected.)

2. Proof of identity and foreign status. This involves sending in either original identity documents, such as a passport, or authenticated and certified copy of the documents. If you choose to send original documents, the process is not as long (but there is always fear of losing it in the post). If sending copies (which is probably a wiser option), the process is a bit longer. Copies need to be sighted, authenticated and certified. You can do so through one of IRS’ accepted U.S. embassies or consulates located in Frankfurt, London and Paris: this route is only available if you reside in or happen to be visiting these locations. Otherwise, authenticating and certifying must be done by the issuing office and/or Government agencies of your documents, which may require a Notary Seal, and thus may also require visiting a Notary Public prior to sending in your documents to the issuing office and/or Government agencies for final authentication and certification―all of which will generally incur fees at each stage. Incorrectly authenticated and certified copies will be rejected by the IRS.

The thought that after going through with getting documents authenticated and certified, paying all those fees, waiting (we believe) six weeks for the application to be processed, only to be advised the application has been rejected is enough to make us let IRS have that 30%!

Claiming Through an Online Tax Interview

It is understood that with a number of online retailers (e.g. Amazon, Smashwords, Createspace), you can declare your foreign status and claim a reduced rate of withholding by simply taking part in an online Tax Interview with the online retailer you are selling on. This involves clicking through a few questions, confirming your foreign status and submitting your country’s tax identification number. Completing this online interview is sufficient to receive the income tax treaty benefits your country has with the U.S. This makes claiming a reduced rate of withholding a lot simpler, more convenient and painless. Whether this option is common in all online retailers, we’re not sure; so claiming a reduced rate this way may only be an option with some but not others.

Claiming Through Your Own Country’s Tax Department

If claiming a lower rate of withholding through the IRS is a process you don’t want to go through; or if an online Tax Interview and submitting your country’s tax identification number is not an option available to you, it may be possible to claim the foreign tax to which you are entitled back under the income tax treaty with the U.S. through your own tax department.

We were not too excited about the process of getting the ITIN and filing through the IRS. We also didn’t have the option of using New Zealand tax identification numbers to claim the reduced withholding tax rate when we first started selling our eBook. But then we didn’t have to do either things. Here in New Zealand, we can claim the amount of overpaid foreign tax back―a foreign tax credit/refund―at the end of the tax year with our country’s tax department.

We’re not sure if claiming back the overpaid foreign tax is an option with other countries, but if you’re not keen on the idea of going through the IRS to claim the reduced rate of withholding or you don’t have the option of an online Tax Interview and submitting (or you don’t want to submit) your country’s tax identification number to online retailers, you may want to look into claiming back the foreign tax already paid in your own country and getting it refunded.

So, no longer do we have to worry about the lengthy process of document gathering and authenticating and certifying them. Claiming the reduced rate of withholding is not only possible through the IRS, but it is also now possible to claim it through an online Tax Interview with (some) online retailers as well as possibly claiming a foreign tax credit/refund with your country’s tax department when you file your income taxes at the end of the year. It’s gotten a lot easier and less painful.